College basketball rankings: Auburn's body of work earns Tigers No. 1 spot over Gonzaga in Top 25 And 1 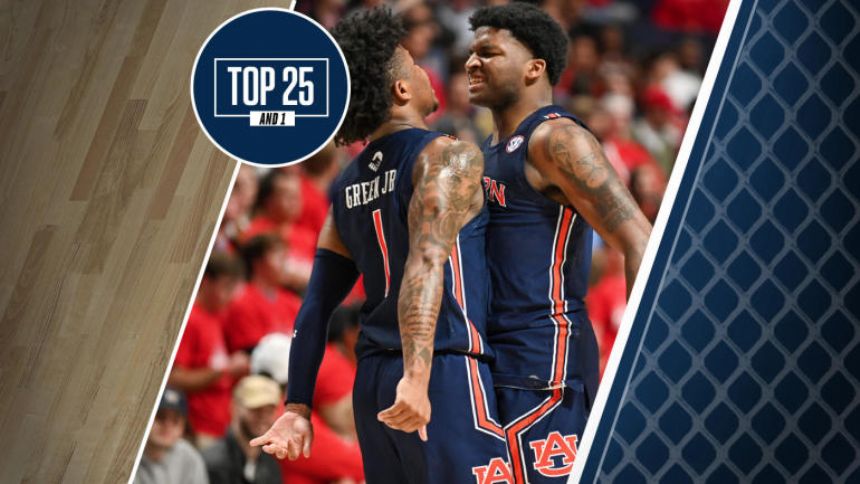 Auburn and Gonzaga will be No. 1 and No. 2 in some order when the Associated Press Top 25 poll updates Monday. Voters who rely almost strictly on computer numbers will likely put the Zags No. 1 considering Mark Few's team holds the top spot in most computers - among them the NET, KenPom, BPI, Sagarin and Torvik. But if the goal is to reward the team that has accomplished the most through the first 10 weeks of this season, Auburn should move to No. 1 in the AP poll for the first time in school history.

Bruce Pearl's Tigers have the best body of work.

After Saturday's 80-71 win at Ole Miss, Auburn is now 16-1 overall and 5-0 in the SEC. More specifically, the Tigers are 4-1 in Quadrant 1 and 4-0 in Quadrant 2, meaning they're 8-1 in the first two quadrants with zero additional losses. That represents the best winning percentage (88.9) inside the first two quadrants of any team - a winning percentage that is, by the way, 17.5 points better than Gonzaga's (71.4). Auburn is also the only team that hasn't lost in regulation, and its 13-game winning streak is tied (with Davidson) for the longest in the sport. And for those still trying to break a tie between the Tigers and Zags, perhaps you should consider that they do have a common opponent in Alabama. Auburn beat the Crimson Tide 81-77 on the road, while Gonzaga lost to them 91-82 in Seattle.

Add it all up, and it's clear that Auburn should be No. 1 right now with Gonzaga one spot below the Tigers. That is the way I have it in Sunday's updated AP Sports Top 25 And 1 daily college basketball rankings. After that, it's a Wisconsin team that's 9-2 in the first two quadrants with zero additional losses, followed by Baylor at No. 4. And, yes, I'm aware that Baylor lost at home to Oklahoma State on Saturday. That's not ideal, but the Bears are still 5-1 in Quadrant 1 and 7-2 in the first two quadrants with zero additional losses. You cannot find four better resumes than that. So dropping the reigning national champions any further would be nonsensical.

On that note, let me remind you that I never pay much attention to how high a team rises after a win or how low a team drops after a loss. Instead, I simply reevaluate every team's body of work each morning (while also considering various other factors), then I slot them where I believe they belong in this moment. And, again, in this moment, I genuinely believe Auburn belongs at the top of the AP poll. It'll be interesting to see how many AP voters agree Monday.