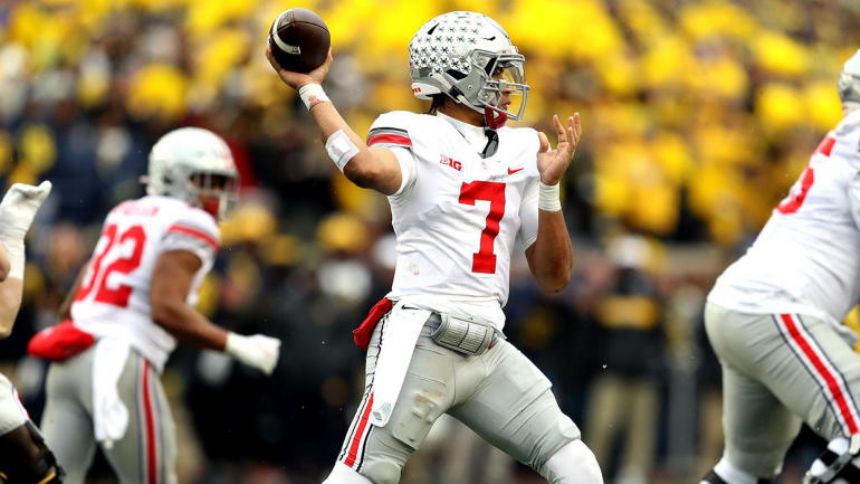 The Big Ten saw plenty of surprises last season. Michigan won the conference for the first time since 2004 and went to the College Football Playoff, while Ohio State and Michigan State played in New Year's Six bowls. In the conference's West division, Minnesota recovered from a down 2020 to win nine games, as did Purdue, which notched its highest win total since 2003.

On the other side, Penn State had another mediocre (7-6) season and Northwestern followed up a division title with a 3-9 record. Will we see as many surprises in 2022, or will things return to normal? I have no idea, but that's never stopped me from trying to peak into the future anyway. Let's do that with a look at 2022 Big Ten win totals from Caesars Sportsbook.

Analysis: Illinois' win total was set at 3.5 last season, but won five games in Bret Bielema's debut thanks primarily to one of the better defenses in the Big Ten. With a change at offensive coordinator, the Illini hope to improve by at least one win to reach a bowl game. I think that's more likely to happen than the team finishing 4-8 or worse. The first four games will be massive. Pick: Over 4.5 (-110)

Analysis: I don't think Indiana was as bad as its record suggested last season, and a friendlier schedule should help the Hoosiers take a step forward in 2021. There are winnable home games against Illinois, Maryland and Purdue, and the toughest games are all on the road save for Michigan. Having said that, the Hoosiers probably regret scheduling Cincinnati in the noncon. Life in the Big Ten East is hard enough without adding playoff teams to the schedule. Pick: Over 4 (-120)

Analysis: When I first saw Iowa's total, I thought, "that's way too low," but then I went through the schedule and saw the Hawkeyes have the pleasure of drawing both Michigan and Ohio State from the East. The good news is key divisional games against Wisconsin and Nebraska will be in Iowa City, as is the annual clash with Iowa State. While 7-5 is certainly in play, barring disaster or injuries, 8-4 seems well within reach. Pick: Over 7.5 (+100)

Analysis: Maryland's season is setting up to be a roller coaster. The Terps should get off to a 3-0 start before consecutive games against the Wolverines and Spartans. Then there's a soft middle before a gauntlet of Wisconsin, Penn State and Ohio State in consecutive weeks. That could make the final against Rutgers a lot more difficult than anticipated! The most likely outcome here is a push, but if forced to take a side, I see an unexpected loss more often than an upset win. Pick: Under 6 (-125)

Analysis: I know a lot of people expect the Wolverines to take a big step back considering everyone they lost, but this should still be one of the better teams in the Big Ten and a primary contender for the conference title behind Ohio State. The nonconference schedule is pillowy soft, and a road trip to Iowa is the only obstacle I see before mid-October's showdown with Penn State. Michigan isn't likely to win the Big Ten or reach the playoff again, but it's not hard to find 10 wins on the schedule. Pick: Over 9.5 (-115)

Analysis: I wrote last week that nobody should be surprised if the a bit in 2022, but this win total is too drastic a step. The Spartans might be slightly worse on offense, but they should be better defensively and some of their most demanding games (Ohio State and Wisconsin) are at home. If they go on the road and beat Washington in early September, I don't see how they fail to reach eight wins. If they lose, they'll probably still get there. Pick: Over 7.5 (-125)

Analysis: Minnesota fans, does it help if I tell you I'm surprised I'm taking the under here? I wasn't expecting to, but after the typically easy noncon schedule, things get a lot more difficult. Not only do the Gophers draw Michigan State and Penn State from the East, but they get both on the road. There are also road games against Wisconsin, Nebraska and Illinois. Also, while I know coaches are confident in a new-look offensive line, I need to see it first, and I have more significant concerns about the front seven that must replace a few key players from a tough defense last season. Pick: Under 7.5 (-125)

Analysis: Can the greatest 3-9 team of all time improve to 8-4 in 2022? Considering Nebraska played like a 6-6 team last year, it technically wouldn't be that large a leap, but I'm not going to bet on it. Honestly, I don't know what anybody has seen from Nebraska over the last eight years that would make them optimistic about anything. However, I think we'll see a rebound from a lot of the horrific breaks this team suffered last year. The Greatest 3-9 Team Of All Time will be a perfectly mediocre 6-6 team. It might even get to 7-5, but betting on 8-4 feels foolish. Pick: Under 7.5 (-125)

Analysis: Let me start by saying that I wouldn't make this bet if I were you. I'm not going to. I'm projecting Northwestern to go winless in the Big Ten this year, which is the kind of thing that happens before the Wildcats figure out a way to win 10 games while scoring only 17 points per game. While I don't put anything past this program, there aren't many obvious reasons to bet on it happening. So if you absolutely have to place one, I'd go under, but I won't be joining you. Pick: Under 3.5 (+110)

Analysis: There's nothing I enjoy less than predicting a great team will go undefeated. Winning is difficult, and going an entire season without messing up once is a tall mountain to climb. But Ohio State is more likely to go 12-0 or 11-1 than anything else, so with the total set at 11, I don't see how you can bet anything other than the over. It'll have one of the best offenses in the country, and if Jim Knowles improves the defense, this team will win the Big Ten and return to the College Football Playoff. Pick: Over 11 (-140)

Analysis: I firmly believe that Penn State is better than the team we've seen the last two seasons. I don't take anything that happened in the Big Ten in 2020 too seriously, and there are reasons to think the Nittany Lions will take a step forward this year. They're still one of the more talented teams in the conference, and quarterback Sean Clifford will be playing under the same offensive coordinator in consecutive seasons for the first time in his career. Despite losing a few key components, the defense should still be good. Finally, the schedule isn't too bad. The Lions get Ohio State and Michigan State at home, and a road trip to Auburn won't be nearly as difficult as it looked like it would be when it was scheduled. Pick: Over 8.5 (-105)

Analysis: Like Michigan State, Purdue is another team I expect to take a step back in 2022. The difference is I believe Purdue's step back will be far more prominent. The Boilermakers went 9-4 last year, and here I have them finishing 5-7 and missing out on a bowl game. That could be too steep a drop, but the Boilermakers get nearly all their "coin flip" games on the road, which adds difficulty to everything. With a few breaks, this team could finish 7-5, but even that would only be a push, and I just don't see 8-4 happening with this schedule. The under is a solid bet. Pick: Under 7 (-130)

Analysis: I've taken the pessimistic view with every other team I project to push their win total in 2022, so it's time for some optimism. While I'm projecting the Knights to finish 4-8, a 5-7 record seems more likely to me than 3-9 with this schedule. The Knights did just win five games last season, and they do an excellent job of being a pain in the butt against teams that don't have significant talent advantages over them. While they're still likely to get pounded by the better teams of the East, they'll be feisty enough against everyone else that it wouldn't come as a shock if they pull off an upset somewhere. Pick: Over 4 (-105)

Analysis: I've been waiting for Wisconsin's offense to take a step forward in its passing attack with Graham Mertz for'the last couple of seasons, and it hasn't come. I'm not counting on it in 2022. Of course, that doesn't mean the Badgers are going to fall apart. Running the ball effectively and playing suffocating defense has worked well for a long time in Madison, and while that limits the program's ability to win the conference, it can still win the West. Road trips to Ohio State and Michigan State won't be a lot of fun, but the Badgers should be favored in every other game outside their road trip to Iowa. Pick: Under 9 (-115)