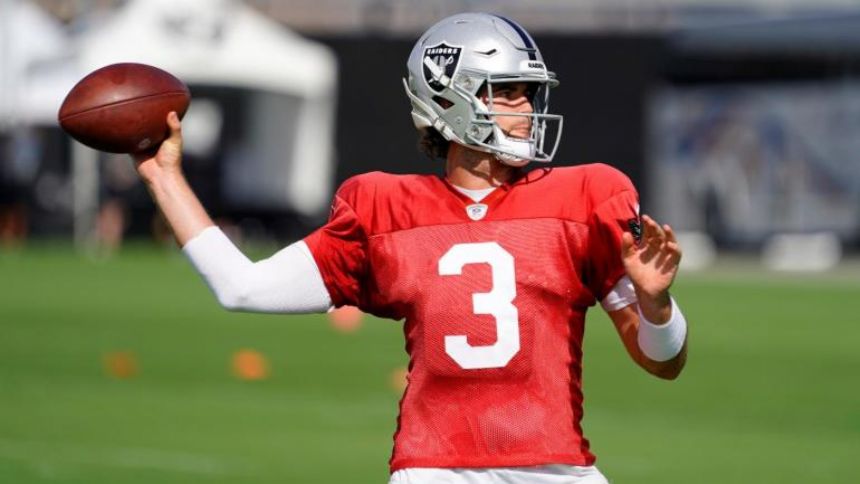 After recording the worst record in the NFL the last two seasons, the Jacksonville Jaguars will get an early start this year when they kick off the NFL preseason on Thursday against the Las Vegas Raiders in the 2022 NFL Hall of Fame Game. Jacksonville went a franchise-worst 1-15 in 2020 and showed minimal improvement last year, but did post a stunning 26-11 victory over Indianapolis in the season-finale to finish 3-14. The Raiders overcame the distraction created by former coach Jon Gruden last season, going 10-7 to earn a wild-card spot in the AFC, and added a top-flight receiver in Davante Adams, Derek Carr's college teammate, during the offseason.

Kickoff from Tom Benson Hall of Fame Stadium in Canton, Ohio is scheduled for 8 p.m. ET. The line is pick'em in the latest Raiders vs. Jaguars odds at Caesars Sportsbook, while the over-under for total points scored is 30.5. Before locking in any Jaguars vs. Raiders picks or 2022 NFL Hall of Fame Game predictions, make sure you check out what SportsLine NFL expert Larry Hartstein has to say.

A former lead writer for Covers and The Linemakers, Hartstein combines a vast network of Vegas sources with an analytical approach he honed while working for Pro Football Focus. Entering the 2022 NFL season, he is 427-344 all-time on NFL sides (plus $3,764 for $100 players), including 394-330 against the spread.'

Now, Hartstein has locked in on Raiders vs. Jaguars from every angle and released a confident against-the-spread pick for the NFL Hall of Fame Game 2022. You can visit SportsLine now to see his picks. Here are several NFL odds and trends for Jaguars vs. Raiders:'

Prior to joining Las Vegas in January, new coach Josh McDaniels was the offensive coordinator for New England, which did not take the results of preseason games lightly. It's uncertain if he'll bring that mind set to the Raiders, but he'll still be looking for Jarrett Stidham to impress on offense. With Derek Carr unlikely to see action, Stidham will receive a chunk of playing time as he attempts to get a leg up in the battle for the backup quarterback job.

A fourth-round pick of the Patriots in the 2019 NFL Draft, Stidham was under the tutelage of McDaniels for three years and appeared in eight regular-season games, completing 50 percent of his pass attempts for 270 yards with two touchdowns and four interceptions, although he did not get on the field last year. Star receiver Davante Adams also figures to be kept out of the lineup on Thursday, but fellow newcomer Mack Hollins likely will get a chance to settle into a new system. The 28-year-old wideout played in all 17 contests for Miami last year, hauling in 14 passes for 223 yards and a career-high four TDs.

The long-awaited reunion of former Clemson teammates Trevor Lawrence and Travis Etienne will be delayed a bit longer as new coach Doug Pederson stated the quarterback and running back won't suit up on Thursday. Both players were selected in the first round of the 2021 NFL Draft, but Etienne missed his entire rookie season with a foot injury. Pederson, who guided Philadelphia to its lone Super Bowl championship in 2017, also won't have backup signal-caller C.J. Beathard at his disposal since the 28-year-old is nursing a groin injury.

That means Jake Luton, who is slated to be the Jaguars' third-string quarterback, likely will see plenty of action against the Raiders. The 26-year-old, who was a sixth-round draft pick in 2020, started three games for Jacksonville that season and completed 60-of-110 pass attempts for 624 yards with two touchdowns and six interceptions but was cut prior to the 2021 campaign. Kyle Sloter, who was signed on July 24 after finishing second in the USFL during its 2022 season with 1,798 passing yards in nine games for the New Orleans Breakers, also should take snaps on Thursday.

Hartstein has analyzed this matchup and while we can tell you he's leaning Under on the point total, he has discovered a critical X-factor that has him jumping all over one side of the spread. He's only sharing what it is, and which side to back, at SportsLine.

Who wins the 2022 Hall of Fame Game? And which critical X-factor makes one side of the spread a must-back? Visit SportsLine now to see Larry Hartstein's Raiders vs. Jaguars picks, all from the NFL expert who's 427-344 all-time on NFL sides, and find out.