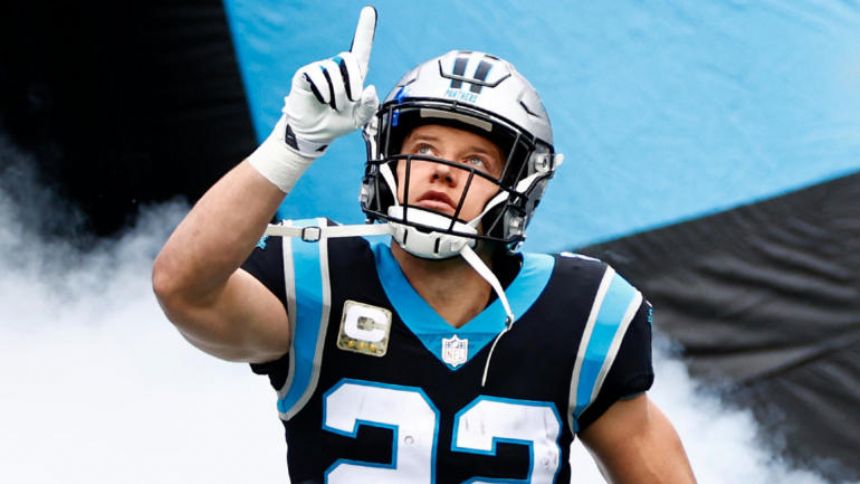 The draft is over and before we know it the NFL season will be here. What's in store for the Carolina Panthers?'

This offseason they were rumored to be interested in Cleveland Browns quarterback Baker Mayfield, but nothing became of the talk. Those rumors were put to rest in part by the team selected quarterback Matt Corral out of Ole Miss with the No. 94 overall pick.

Carolina went 5-12 last season and finished last in the NFC South. Can they improve on that? Getting Christian McCaffrey back from injury after he missed more than half of the 2021 season should help.

Let's take a look at the Panthers' opponents for this season and how the teams will match up.'

New Orleans Saints: The Panthers and Saints went 1-1 against each other last season. This year the Saints have a solid defense and quarterback Jameis Winston should have a decent year. The Saints finished second in the NFC South last season with a 9-8 record.'

Atlanta Falcons: The Falcons traded away quarterback Matt Ryan and will now go with Marcus Mariota and/or'Desmond Ridder. The team added USC wide receiver Drake London with the No. 8 overall pick in the draft and he will join star Kyle Pitts on the offense.'

Tampa Bay Buccaneers:'The Bucs did have a quarterback question after Tom Brady announced he was leaving football, but that did not last long, and after fewer than 50 days he decided to return. Head coach Bruce Arians did retire from his position, and that stuck, leaving Todd Bowles as the HC.'

Arizona Cardinals:'Kyler Murray's ability to bring postseason success to the team is still an unknown. He has shown moments of stardom, but the last look we got of him was against the Los Angeles Rams in the playoffs, where he had two interceptions and no touchdowns. Last season, the Panthers beat the Cardinals 34-10.'

Cleveland Browns: The Browns now have'Deshaun Watson, who was accused of sexual misconduct but will not face criminal charges for the accusations. The team still employs Baker Mayfield, for now, despite rumors he would be traded.'

Pittsburgh Steelers: Ben Roethlisberger retired, but the team may have found its next long term quarterback in Pitt's Kenny Pickett, who they drafted in the first round. Pickett's hand size and use of gloves have caused fans and other NFL players to question whether he is the real deal, but head coach Mike Tomlin has faith in the rookie.'

San Francisco 49ers: The 49ers are another team that seems to be moving on from their recent starting quarterback, as it appears they are going from Jimmy Garoppolo to Trey Lance. Not long ago the team was in the Super Bowl, but injuries piled up in the two seasons since.

Denver Broncos: The Broncos could be a team to worry about this season, with'Russell Wilson as the squad's new quarterback, suddenly putting them in serious Super Bowl contention. AP Sports had their best pick as fourth-round defensive tackle Eyioma Uwazurike.'

Detroit Lions: The Lions struggled last season. Stop me if you've heard that before. Detroit went 3-13-1, last in the NFC North and one of the worst records in the league. But things could be turning around after a strong draft that included first-round edge rusher'Aidan Hutchinson'and receiver Jameson Williams.

Seattle Seahawks:'Pete Carroll says the Seahawks are not likely to trade fora quarterback following Russell Wilson's exit. Carroll has high praise for Drew Lock, who is looking like their guy, at least for now. The Seahawks finished last in the division last year.

Los Angeles Rams: The defending Super Bowl champions are once again a major threat in the NFC. It's difficult to repeat in the NFL, but I see this team making a real run for it. Their division is not as strong as it has been in the past, due to changes at QB in Seattle and San Francisco.

Baltimore Ravens:'This team needs to stay healthy, which they didn't do last season, but if they can,'Lamar Jackson can again prove why he is a top quarterback in the league. Last season the team went 8-9 and were last in the division, but I don't see that happening again after a strong draft and a healthier roster.

Cincinnati Bengals: The Bengals reaching the Super Bowl was surprising, and I don't see it as a one-time thing.'Joe Burrow is the real deal and they have the pieces around him to make a playoff run again. The team lost to the Rams in the Super Bowl, but the playoff and championship experience will be valuable going forward.

New York Giants: The Giants struggled last season, going 4-13 and landing last in the NFC East, a division that is less than impressive. The Giants have a new head coach in Brian Daboll. Last season, the Panthers beat the Giants 25-3.'