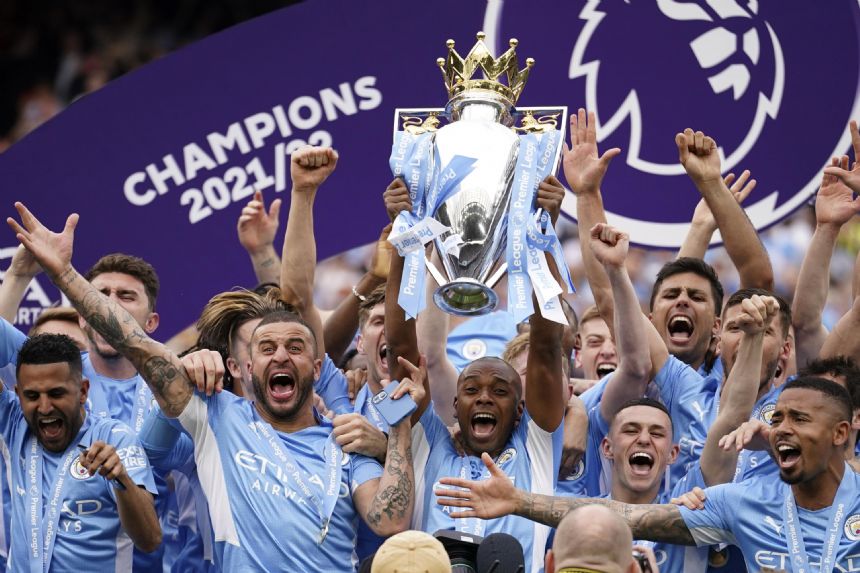 MANCHESTER, England (AP) - Manchester City had been here before, losing at home and risking throwing away the title.

Would the leaders choke like never before in the Premier League?

The prospect of a first-ever changing of the lead on the final day was growing with Villa leading 2-0 at the stunned Etihad Stadium as challenger Liverpool chased a win over Wolverhampton.

Just like when a comeback was conjured up in 2012 to win its first Premier League title with two stoppage-time goals, City produced another rousing recovery.

This time it took three goals - all scored in five minutes from the 76th minute - to turn it around against Villa to win 3-2 and successfully defend the title by a single point.

Even when City was losing, Liverpool was still in second place because it was only drawing 1-1 with Wolves at Anfield.

But the importance of lkay Gundogan's second goal in the 81st minute was magnified moments later when Mohamed Salah sent Liverpool in front against Wolves before Andy Robertson sealed a 3-1 win for Liverpool.

"We came back from the dead today and won the game," captain Fernandinho said after his final game for City. "It's an amazing feeling."

No wonder thousands of City fans flooded onto the field at the final whistle, defying new orders against pitch invasions. Soon the stadium was cloaked in blue smoke.

Once the field was cleared, the Premier League trophy could be handed to City for the sixth time in 11 seasons.

Liverpool - the only team to disrupt City's run of titles since 2018 with its 2020 success - had to settle for second place. Jurgen Klopp's FA Cup and League Cup winners are, however, still on for a treble with the Champions League final against Real Madrid on Saturday.

Tottenham is returning to the Champions League next season after a two-season absence thanks to a 5-0 rout of last-place Norwich clinching fourth place.

There will be no return to European football's top-tier competition for Arsenal after five seasons away after a collapse that was corrected by completing the season by beating Everton 5-1 to finish fifth.

Manchester United will join Arsenal in the Europa League under new manager Erik ten Hag despite losing 1-0 to Crystal Palace. West Ham wasted the chance to dislodge United from sixth place after losing 3-1 at Brighton so this season's Europa League semifinalists will drop into the Europa Conference League.

Dropping out of the Premier League after six seasons is Burnley after a 2-1 loss to Newcastle. Leeds capped its recovery under American coach Jesse Marsch by beating Brentford 2-1 to avoid relegation.