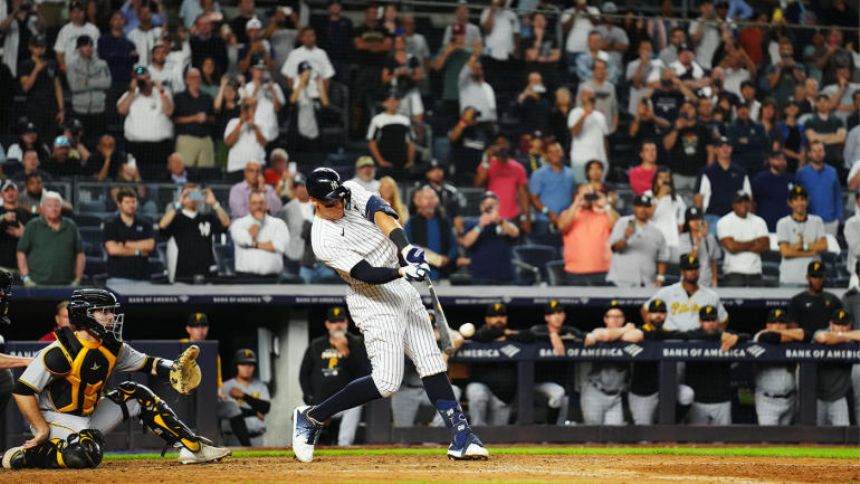 Good morning to everyone but especially to...

We had planned to debut an Aaron Judge Watch'section in the newsletter today, and the first edition wasn't looking promising. Entering the ninth inning, he was 0 for 3 with a walk, and the Yankees'trailed the lowly Pirates'8-4. Then came history. Then came victory.

Four batters later, Stanton launched his third career walk-off grand slam, which is tied for most in MLB history. While Judge's home run chase is the biggest storyline, Stanton's slam was huge: The Yankees' AL East lead over the Blue Jays would have shrunk to just 4.5 games with a loss.

A few more notes on Judge...

... AND ALSO A GOOD MORNING TO NATHAN MACKINNON

One of the NHL's brightest stars now has the NHL's biggest contract. Fresh off leading the Avalanche to a Stanley Cup title, Nathan MacKinnon has signed .

And not such a good morning for...

One of the most iconic rivalries in college football': When Oklahoma joins the SEC in 2025, the Bedlam Series rivalry game against Oklahoma State -- which dates back to 1904 and has been played every year since 1910 -- .

To give you an idea of how long ago 1904 was, Oklahoma was still three years away from becoming a state.

The Bedlam Series has been, well, bedlam time and time again. Even when the on-field action doesn't live up to the hype, it's a rivalry unlike any other. Money makes the world go 'round, and that's especially true in college football, but rivalries make the sport so fun and unique. This news is a major bummer.

After Week 1, our NFL reporter Pete Prisco said not to overreact. After Week 2, however, he might be changing his mind regarding one of the league's most talked-about players.

Notice the word "might." The Dolphins -- one of just six undefeated teams left -- are still just eighth in . Here's the top five:

The Cardinals were the biggest risers, going from 21st to 12th after their comeback against the Raiders, while the Colts fell from 14th to 25th after a shutout loss in Jacksonville. The Colts entered the season as a playoff hopeful but are winless so far.

Another team with high expectations but without a win: the Bengals. Joe Burrow has been sacked 13 times, most in the league,'and Jeff Kerr says several parties are at fault in his' column.

Reacting to the NBA Top 100: Impact of stars returning from injury ??

In case you somehow missed it, our NBA experts revealed , and it has produced a lot of reactions. As our NBA columnist Bill Reiter , "there are as many arguments as players."

As I mentioned in , four players in the top 50 didn't play at all last season:

Are those rankings fair? Are we expecting too much from these players after career-altering injuries, or are we underrating them because it's been so long? With Leonard, Murray and Simmons all on teams regarded by Caesars Sportsbook as top-10 title favorites, their performances relative to their rankings have massive impacts. , Bill notes.

For all of Bill's biggest takeaways,

If you thought chess was boring, think again ??

This is the first time I've covered chess in this newsletter. I will never forget -- or unsee -- it.

On Monday, Magnus Carlsen, the world's top player and World Chess Champion since 2013, resigned on his second move in a match against'Hans Niemann in the Julius Baer Generation Cup. Withdrawing is essentially unprecedented in professional chess, and Carlsen has not said why he decided to withdraw. .

This is where things truly go off the rails, :

The Sinquefield Cup said that there were no signs anyone cheated in the event, but Carlsen's latest withdrawal has only fanned the flames.