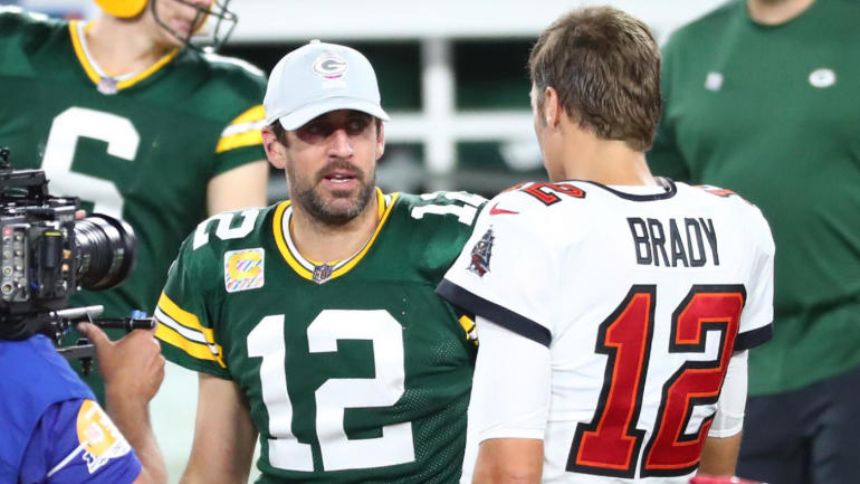 When the 2022 season kicks off, Tom Brady will be doing something that fewer than 10 players have ever done in NFL history: He'll be playing in a game after his 45th birthday.'

The list of players who have done that is a short one and it's a list that Aaron Rodgers doesn't plan on joining. During an interview that was held Wednesday (Brady's actual birthday), the Packers quarterback was asked if he planned on playing until he was 45 and he gave a very quick answer.'

"No," Rodgers told the media. "But happy birthday, Tom."

The fact that Rodgers, who turns 39 in December, doesn't plan on playing for at least six more years shouldn't come as a surprise to anyone. After all, just two months ago, Rodgers said that he's literally consumed by thoughts of retirement.'

"I think about it [retirement] all the time," Rodgers said on TNT after "The Match," via'via AtoZ Sports. "When you commit, you're 100%. But the older you get, the interests change, and the grind, I think, wears on you a little more."

In that same interview, Rodgers didn't sound like someone who planned on playing in the NFL much longer.'

"The football part is the easy part," Rodgers said. "That's the joy. It's the other stuff that wears on you and makes you think about life after football. Tommy [Brady] obviously set the bar so high with playing so many years, but I can definitely see the end coming."

Of course, Rodgers did this offseason that might be enough to keep him on the field for a few more years. That being said, don't be surprised if he doesn't end up playing out the entire contract. Even though the new deal runs through the 2024 season, Rodgers is taking things year-to-year. '

"I understand how the deal is portrayed," Rodgers said, via Packersnews.com. "To me, it was like a one-year, plus a two, plus a one. So there will be decisions after this year for sure."

One reason Rodgers doesn't want to put a timetable on how much longer he's going to play is because he's genuinely not sure.'

"If you say I'm for sure playing two more, three years and then you have a magical season that ends with a championship and think that that might be the best way to ride off, I don't want to commit to something," Rodgers said in June,'via ESPN.com. "You say, I'm only playing one more year and you have a bitter taste in your mouth and still got the drive and the passion to play one or two more years, I just don't want to get pigeonholed into it."'

Basically, we could see Rodgers ride off into the sunset after this year or he could end up sticking around for two or three more years.'

Rodgers admitted this week and that those helped him win back-to-back MVPs, so maybe he's just waiting to take some more before he makes any big life decisions.'