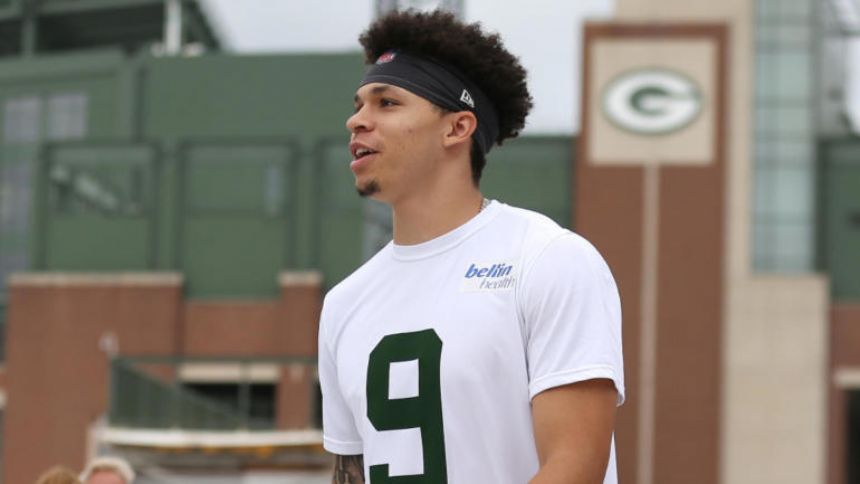 A rookie wide receiver has been one of the breakout stars of Green Bay Packers training camp -- at least, according to the team's quarterback. Aaron Rodgers fourth-rounder Romeo Doubs this week, noting that he seems to make a "wow" play every day.'

Of course, Doubs was not the only receiver the Packers drafted this year. They traded up in the second round to land former North Dakota State star Christian Watson with the No. 34 overall pick. But the 6-5, 200-pound wideout with elite speed and athleticism has been on the sidelines for the start of camp with an injury.'

Rodgers, though, is not worried about Watson's progress or his ability to pick things up when he does get back on the field.'

"It's not a big concern. He's a really smart kid," Rodgers said, per Packers Wire. "He is a smart kid. It'd be nice to get him off the PUP so he could do some of the walkthrough stuff, but he'll be fine. He's super athletic. He went through the entire offseason program with us, the OTAs, minicamp. He's been in my hip pocket, asking questions after periods and during individual time. I'm not worried about him."

As for Watson himself, it seems like he is trying to look at the bright side.

"It's definitely frustrating, but I've tried not to let that affect me too much," Watson said. "There are still things I can do to get better and still be a part of everything, taking mental reps and still being in the playbook. So I try to look at positives and kind of stay away from the negatives."

Both Doubs and Watson have an opportunity to emerge as big parts of the Green Bay offense after the team moved on from both Davante Adams and Marquez Valdes-Scantling this offseason. Developing a rapport with and earning trust from Rodgers is a big part of that and Doubs is further along in that department, but it seems like Watson isn't falling too far behind.'