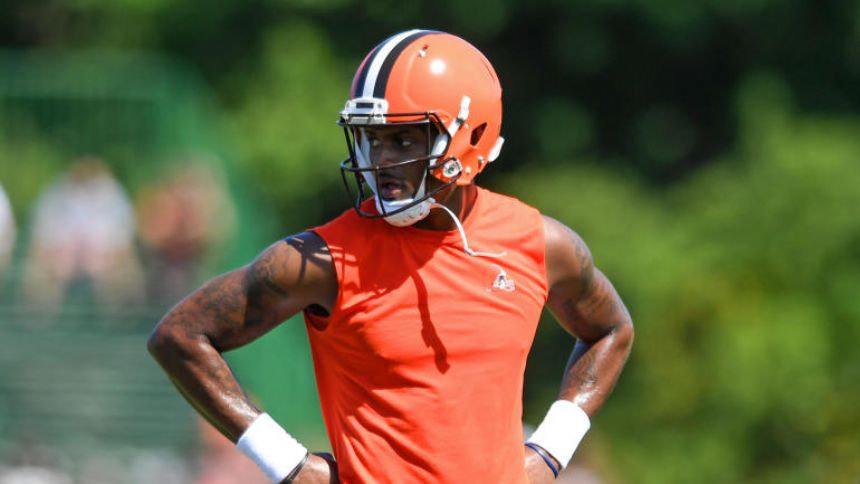 The long-anticipated decision of whether Browns quarterback Deshaun Watson violated the NFL's personal conduct policy was issued on Monday by disciplinary officer Sue L. Robinson, who was jointly appointed by the NFL and NFLPA. Watson's case was the first under a revamped process in the NFL collective bargaining agreement where commissioner Roger Goodell is no longer the sole arbiter of personal conduct discipline.

The retired U.S. District Court judge suspended Watson six games for violating the policy without imposing a fine. Since suspensions are without pay, Watson forfeits $345,000 (or 6/18ths of the $1.035 million 2022 base salary) because he earns $57,500 each of the 18 weeks in the regular season. None of Watson's $44.935 million signing bonus in the fully guaranteed, five-year contract worth $230 million he signed in March as a part of trade from the Texans is in jeopardy because of the way the contract is structured. Robinson also thought it was necessary for Watson's massage therapy to be limited to team-approved massage therapists for the remainder of his career.

Either party, Watson or the NFL, have three business days to appeal Robinson's findings, according to the CBA.' A response to an appeal is due within two business days later. An appeal is limited in why discipline should be modified based on the evidentiary record. Goodell or his designee would hear the appeal.

The NFLPA announced it wouldn't appeal prior to the decision and suggested the NFL do the same. The NFL reportedly hasn't decided whether to appeal. The deadline to file an appeal is Thursday.

Robinson found Watson in violation by engaging in sexual assault, conduct that poses a genuine danger to the safety and well-being of another person and conduct that undermines or puts at risk the integrity of the NFL in her 16-page ruling. Essentially, the NFL won its case against Watson.'

The victory seems hollow because Watson's discipline seems light to many as the NFL was seeking an indefinite suspension where he could apply for reinstatement after one year. For example, the National Organization for Women called the decision "unacceptable, insulting and dangerous, but not surprising." During settlement talks prior to Robinson's decision, the NFLPA rejected the NFL's offer of a 12-game suspension and a $10 million fine.

Robinson clearly states early in her report that her decision was based on the evidence presented to her. Although 24 different women filed civil lawsuits against Watson alleging inappropriate sexual conduct by him during massage sessions that took place while he was with the Texans, and he reportedly booked sessions with at least 66 women over a 17-month span, the NFL's case was based on only four of the women who sued him.

Robinson relied on the NFL's precedent, which should have been expected since she is a former judge, in determining discipline. A key finding by Robinson was Watson's conduct being a non-violent sexual assault despite referring to his actions as egregious and predatory. Robinson didn't elaborate as to why Watson's behavior was non-violent.'

Because of the lack of violence, Robinson appears to be operating from a baseline of a three-game suspension as discipline. That's because Jameis Winston was suspended three games in 2018 for violating the personal conduct policy for groping a female Uber driver, which was a negotiated settlement between the NFL and NFLPA. It was the most severe personal conduct penalty for a non-violent sexual assault.'

Aggravating and mitigating factors were taken into account in determining discipline. Watson's lack of expressed remorse and untimely notice to the NFL of the initial lawsuit filed against him were mentioned as aggravating factors. Cooperating with the NFL's investigation, paying restitution (presumably settling 23 of the 24 civil lawsuits), being a first-time offender and Watson's reputation in the community before the incidents were cited as mitigating factors. There doesn't seem to be significance given to the serial nature of Watson's conduct since he is considered a first-time offender while Winston's punishment involved a single incident with one person.'

Interestingly, Robinson mentions Goodell's failure to put Watson on the commissioner's exempt list last season in the same paragraph as the aggravating and mitigating factors. Watson was a healthy scratch last season. He was on the Texans' 53-man roster where he was paid his $10.54 million base salary but by mutual agreement wasn't in uniform for games and didn't practice with the team. Once a potential trade to the Dolphins didn't happen by the midseason trading deadline, it could be construed that Watson was effectively serving a de facto suspension for the second half of the season.

Notice, standards of fairness and consistency were crucial to Robinson's ruling. The NFL's argument that consistency isn't possible because Watson's conduct was unprecedented, so the punishment should be unprecedented, wasn't found to be persuasive. The following passage can help shed light on Robinson's determination of the length of Watson's suspension.

Robinson wrote: "By ignoring past decisions because none involve "similar" conduct, however, the NFL is not just equating violent conduct with non-violent conduct, but has elevated the importance of the latter without any substantial evidence to support its position. While it may be entirely appropriate to more severely discipline players for non-violent sexual conduct, I do not believe it is appropriate to do so without notice of the extraordinary change this position portends for the NFL and its players."

Robinson also noted that the NFL has been driven by "public outcry" when determining discipline, which specifically relates to the Ray Rice case in 2014. Rice was initially suspended for two games under the personal conduct policy but was subsequently suspended indefinitely after video of his domestic violence incident against his wife became public. The indefinite suspension was overturned on appeal because Rice was being punished for the same offense twice.'

Robinson apparently found some parallels in Watson's situation where the NFL was advocating for a harsher penalty than prescribed for in the policy "without the benefit of fair notice" and "consistency of consequence." It wouldn't be surprising for there to be a revision to the personal conduct policy where the punishments for non-violent sexual assault are clearly stated because of Robinson's ruling, just as changes were made after the Rice ordeal.

The NFLPA's argument that ownership and league management have been traditionally held to a higher standard and will be subject to more significant discipline as specifically stated in the personal conduct policy, but have escaped punishment for similar or worse conduct, seems to have resonated with Robinson. In a footnote, Robinson acknowledges that the policy is equally applicable to players, team owners and management.

The court of public opinion will clearly be on the NFL's side with an appeal because the consensus is Watson's punishment is too lenient. The NFL would be back in the position it was trying to avoid by becoming the final arbiter of personal conduct discipline in the first case under the revised process. An appeal would essentially undermine Robinson's decision since Watson's punishment surely would be increased.'

The NFLPA is reportedly ready to pursue remedies through the legal system should there be an appeal. In the past, the NFLPA has been able to get injunctive relief, which could allow Watson to start the season on the field. Ultimately, the NFLPA hasn't been successful in getting discipline overturned through legal proceedings, just in delaying discipline.'