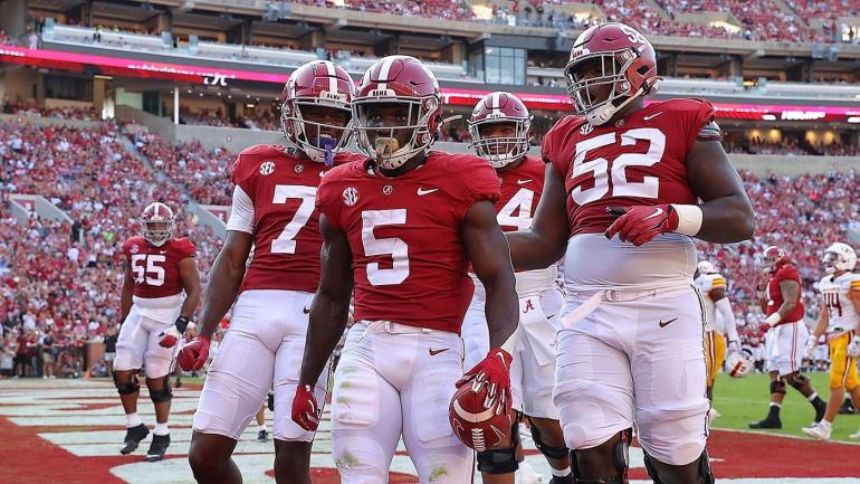 No. 2 Alabama and Vanderbilt kick off their respective SEC schedules as the Commodores go on the road to face the Crimson Tide on Saturday. Alabama gets to dip its toe into league play before diving head-first into the gauntlet of the SEC West, while Vanderbilt could not have drawn a more daunting matchup for this cross-divisional game.

Alabama comes into the game with a 3-0 record after shelling a ULM team last week that provided little resistance. While Vanderbilt does look like an improved program, it's hard to see the Commodores keeping this one close into the second half. Alabama is a 40.5-point favorite for a reason, and it can use this as an SEC tune-up prior to the road trip to Arkansas in Week 5. The Crimson Tide starters should be watching a portion of this game from the sideline.

Vanderbilt faces an immensely steep uphill climb, but it has already surpassed its 2021 win total thanks to an entertaining victory over Northern Illinois last weekend. The Commodores will struggle to keep up with a Crimson Tide roster loaded with four- and five-star talent, but freshman quarterback AJ Swann will be an interesting player to watch against this Alabama defense.

Here is how you can tune in to the first SEC test for both teams on Saturday.

How to watch Alabama vs. Vanderbilt live

Cameron Latu, Alabama TE: The 6-foot-5 pass-catcher presents a large target for quarterback Bryce Young in the passing game, and Latu isn't exactly reluctant when it comes to blocking in the run game, either. Last season, Latu set the Alabama record for receiving touchdowns by a tight end with eight. Through two games this season, Latu is still looking to find the end zone for the first time. This game seems like the perfect time to end that drought.

Henry To'oTo'o, Alabama LB: To'oTo'o spent two seasons at Tennessee, so he is very familiar with this Vanderbilt program. The last time he played the Commodores, in 2020, To'oTo'o got to play some offense and caught a 31-yard pass. Even though he likely won't be used at receiver this time around, To'oTo'o should still have a major impact on this game from the middle linebacker position. Expect To'oTo'o to add to his tally of 2.0 tackles for loss and a sack against an overmatched Vanderbilt offensive line.

AJ Swann, Vanderbilt QB: After throwing for 146 yards and a pair of touchdowns in relief work against Wake Forest, Swann earned his first start last weekend against NIU. The freshman performed extremely well, completing 64.3% of his passes for 255 yards, four touchdowns and no interceptions. Now, the level of difficulty ramps up exponentially. It will be fascinating to see how Swann handles the environment in Tuscaloosa.

Vanderbilt should be proud of what it has done to this point, but this game won't even be close. Alabama simply has too much firepower for the Commodores to keep up in Year 2 of the rebuild under coach Clark Lea. As tempting as it is to pick Vanderbilt against the spread, the team's defense gives me serious pause. In the last three weeks, the Commodores have surrendered 104 points to the likes of Elon, Wake Forest and NIU. The Crimson Tide offense, led by Bryce Young, should be able to name its score. I'm taking Alabama to cover a big number. Prediction: Alabama -40.5