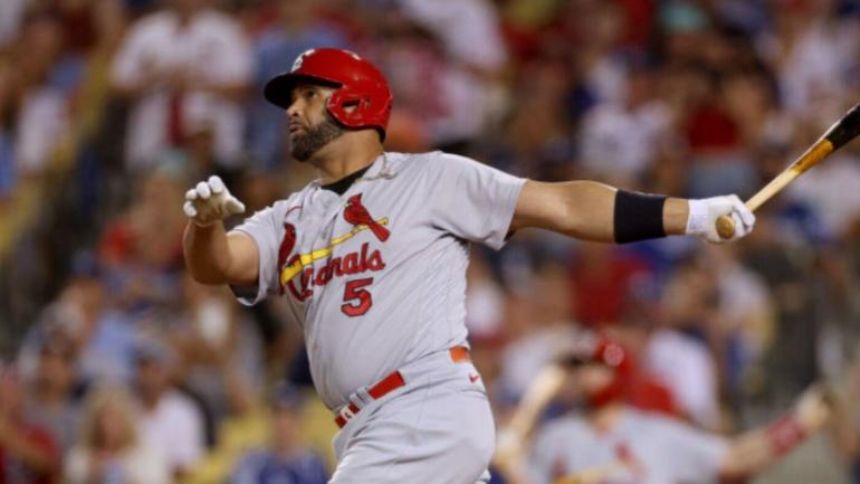 , extending his sole possession of fourth place on the all-time home run list ahead of Alex Rodriguez. The 42-year-old Pujols rejoined the Cardinals this season and it's more than a farewell tour. He's been a very productive platoon bat, and in August he went deep seven times in a 10-game span to make 700 homers a real possibility.'

On Aug. 30,'. Detwiler was the 450th different pitcher Pujols has taken deep in his career, breaking the record held by Barry Bonds. Of course, Pujols would almost certainly have hit his 700th homer earlier if not for the shortened pandemic season in 2020, but that was beyond his control.

So, the question on everyone's mind is how much further beyond 700 home runs can Pujols reach before the end of the season? Here's what you need to know about Pujols after he became the fourth member of the 700-homer club.

For what it's worth, Pujols has averaged one homer ever 16.3 at-bats in his career, which is a top-40 mark in history but does lag behind other premium power hitters. Mark McGwire is the all-time leader with one homer every 10.61 at-bats. Giancarlo Stanton is the leader among active players with 13.82 at-bats per homer.

It's worth noting that by passing A-Rod, Pujols is the all-time home run leader among infielders. Bonds, Aaron and Ruth were primarily outfielders. Pujols has spent the vast majority of his career at first base. Jim Thome is the only other primary infielder with 600 career home runs. He is eighth on the all-time list with 612.

The historical relevance of 700 homers is obvious. Only four players now have ever done it, and there's a chance we may never see another player approach the milestone in our lifetimes. Unless Miguel Cabrera finds the fountain of youth and hangs on another few years, ... probably Juan Soto? He joined the 100-homer club at age 23 earlier this season and has a very, very long way to go. It's not often a player approaches 700 homers.

As some fans and certain segments of the media are wont to do, we can attach asterisks to almost anyone on the all-time home run list. Bonds was connected to performance-enhancing drugs. A-Rod admitted to using them in multiple seasons. Ruth played before integration. Aaron played when amphetamines, now a banned substance, were prevalent throughout the game. Any sort of on-field controversy involving Pujols lacks convincing evidence. You can never be 100 percent sure, but Pujols and his reputation are as squeaky clean as they come.

At this point in his career Pujols is a lefty masher more than an everyday player, though with the Cardinals enjoying a sizable NL Central lead -- and Pujols being so productive the last few weeks -- Pujols has received more starts against righties. That equals more at-bats and a greater chance at strengthening his position on the all-time home runs list.'

The universal DH allows Pujols to play every single game without the wear and tear of playing the field. There's a box office element to this, too. The chase will put butts in the seats and that equals more revenue for the team. That absolutely plays a role in playing time distribution when history this significant is on the line.

The ultimate goal is winning the World Series -- Pujols himself would tell you that -- and the Cardinals should do whatever necessary to improve their World Series chances. Normally that would mean sitting Pujols against righties, but with a sizable NL Central lead, St. Louis can afford to give Pujols more at-bats against righties, giving him as many bites at the apple as possible.

, but what if he had finished the year with, say, 699 homers? Surely he would've come back in 2023 to get the milestone, right? Nope. Pujols has insisted he will retire after the season regardless of his final home run count. He reiterated as much to USA Today:

"I'm still going to retire, no matter whether I end up hitting 693, 696, 700, whatever," Pujols said. "I don't get caught up in numbers. If you were going to tell me 22 years ago that I would be this close, I would have told you that you're freakin' crazy. My career has been amazing." '

"No, I've had enough," he said. "I'm glad I made the announcement this was it when I signed. Really, I wouldn't change a thing.'' '

Getting to 700 homers, then, must be the cherry on top for Pujols, and for his legendary career.