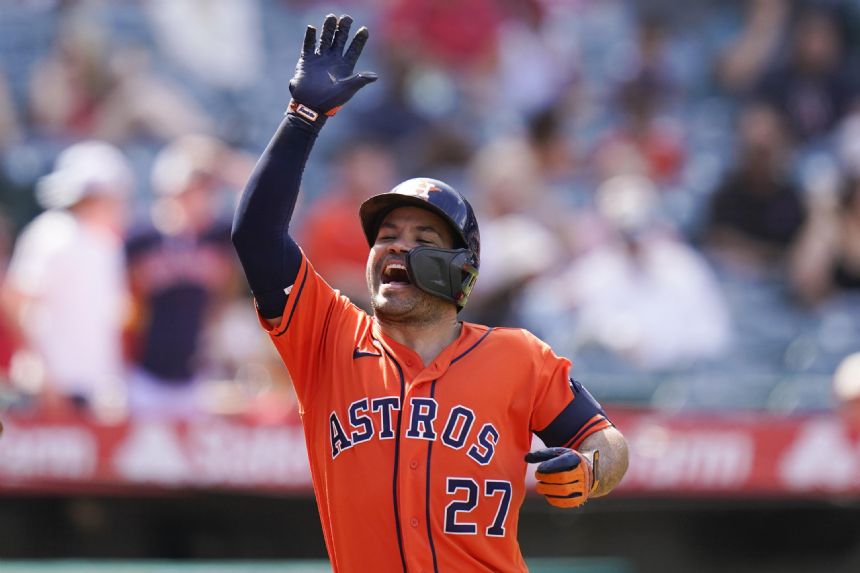 Mike Trout helped the Angels avert a shutout with his 29th home run, a solo shot to center in the eighth inning off Astros' reliever Brandon Bielak.

Reigning AL MVP Shohei Ohtani was given the day off by Angels interim manager Phil Nevin. The Japanese two-way phenom allowed only one run in eight innings during Saturday's 2-1 victory over the Astros in 12 innings, but had gone 2 for 12 at the plate in his last three games.

Altuve chased Angels' starter Tucker Davidson (2-5) with a two-run homer to left field for his 23rd of the season. The All-Star second baseman - who went 6 for 13 in the series - also had an RBI double during a five-run second inning.

Urquidy (13-5) struck out eight. The right-hander retired 12 straight from the third through seventh innings before Mike Ford lined a base hit to right field. Urquidy is 8-2 since June 21, which is tied with teammate Justin Verlander and Chicago's Dylan Cease for most wins in the AL during that span.

Kyle Tucker also went deep for the Astros, who have won five of their last six.

Houston took control with a five-run second inning. After Trey Mancini drew a walk to lead off the second, Tucker drove an inside hanging curveball into the right-field stands to put the Astros up 2-0.

Houston's other runs in the inning came on David Hensley's two-run double and Altuve's RBI double.

Davidson, who got the start for Atlanta in Game 5 of the World Series last year, continued to struggle against the Astros. The left-hander allowed four runs in two innings last fall before he gave up seven runs on seven hits in 6 1/3 innings Sunday. Davidson struck out four in his fifth start for the Angels since being acquired at the deadline.

Coincidentally, Urquidy also got the win last October. He tossed an inning of scoreless relief in the Astros' 9-5 victory.

The first pitch temperature of 102° at Angel Stadium was the sixth-highest since the ballpark opened in 1966.

The highest temperature in Angels history was 109° on Sept. 5, 2020, for the first game of a doubleheader against the Astros.

Astros: C Martin Maldonado was scratched from the lineup due to illness. ... 1B Alex Bregman received a rare day off. ... Yordan Alvarez returned to the lineup after missing the past five games due to a sore hand. He had a two-run single in the ninth.

Angels: RHP Michael Lorenzen (right shoulder strain) will come off the 60-day injured list before he takes the mound on Friday in Houston. Lorenzen's last big league start was on July 1.