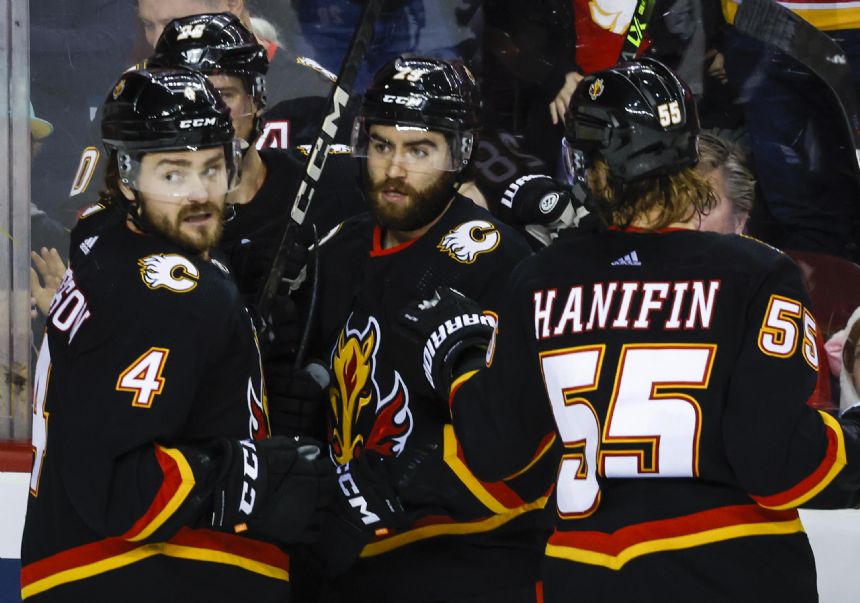 CALGARY, Alberta (AP) - Rasmus Andersson had a goal and two assists to lead the Calgary Flames to a 6-3 victory over the Tampa Bay Lightning on Saturday.

Steven Stamkos, Vladislav Namestikov and Anthony Cirelli scored for Tampa Bay (29-15-1), which dropped both games in Alberta to finish 3-2-0 on longest trip of the season.

Dan Vladar got the start for Calgary and finished with 21 saves to improve to 8-0-3 in his last 11 appearances. His last regulation loss was Nov. 26, and he is 9-4-4 this season.

Tampa Bay's Andrei Vasilevskiy stopped 35 shots and slipped to 20-12-1 on the season.

Down 2-1 in the second period, Tampa Bay got goals 48 seconds apart from Stamkos and Namestikov to take a short-lived lead.

Just over a minute later, Calgary tied it when Toffoli's wraparound went in off Lightning defenseman Victor Hedman's skate.

Five minutes later Calgary, went ahead 3-2 when Andersson's slap shot from the point deflected off Hedman in front and past Vasilevskiy.

Calgary moved out to a 4-2 lead 7:40 into the third when Dube burst down the left wing and scored.

The Lightning cut the deficit to 4-3 on Cirelli's goal with the goalie pulled at 15:58. But the Flames cemented the victory scoring twice into an empty net.

The Flames led 1-0 after 20 minutes when Kadri scored his team-leading 18th on a power play.

Less than a minute later, the Flames went back on the power play, a full two-minute, two-man advantage after Zach Bogosian took a roughing penalty in a post-whistle scrum after Nikita Kucherov had already been called for tripping.

Calgary had plenty of chances for a two-goal lead but the Flames failed to convert. The Lightning tied it at 10:20 of the second.

Noah Hanifin's turnover went to Stamkos at the faceoff circle and he scored on a slap shot under the crossbar. That extended Stamkos' point streak to eight games (six goals, six assists).

On an innocent-looking play, the Lightning surged ahead when Vladar tried to poke the puck away in front. Instead, it hit Namestnikov's skate and went into the net. It was reviewed for a distinct kicking motion, but the goal was allowed.

The Lightning lost Pat Maroon to an injury in the third when he was involved in a collision in front of the Flames net. He went off the ice appearing to be favor his arm.

After sitting for six games as a healthy scratch since being called up two weeks ago from the AHL, Flames 2019 first-round pick Jakob Pelletier made his NHL debut, playing left wing on a line with Trevor Lewis at center and rookie Walker Duehr on right wing. He finished with one shot in his 6:35 of ice time.

Tampa Bay entered action with the league's second-ranked power play. After going 0 for 6, the Lightning have been blanked in four games, doing 0 for 11 in the span.

Lightning: Open up a three-game homestand Tuesday against the Minnesota Wild.