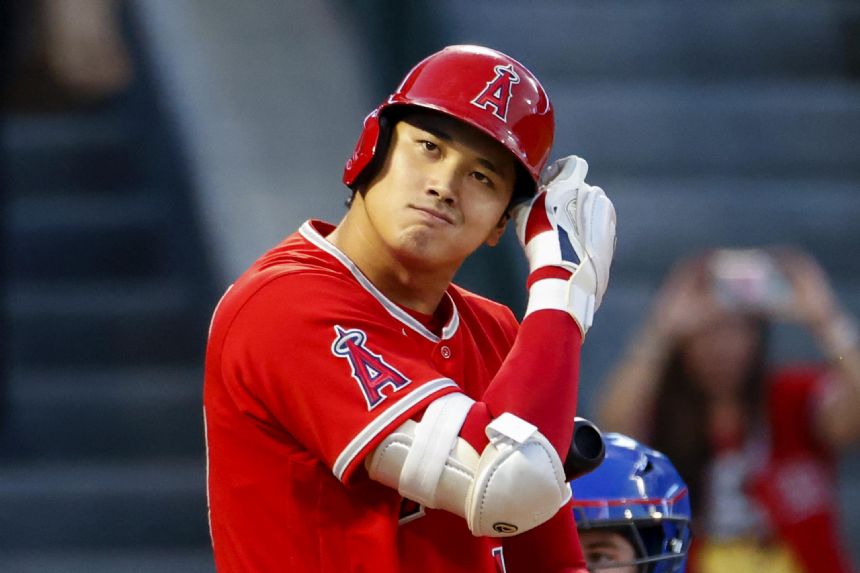 ANAHEIM, Calif. (AP) - Jose Suarez lost a perfect game and the lead in the seventh inning Saturday night before the surging Los Angeles Angels rallied for a 3-2 victory over the Texas Rangers.

Livan Soto had three hits, drove in a run and scored the go-ahead run for the Angels, who have won six straight to tie a season high.

Shohei Ohtani extended his hitting streak to 16 games with a base hit in the eighth inning.

Nathaniel Lowe had a two-run homer in the seventh as the Rangers dropped their fourth straight.

Suarez (8-8) struck out five in retiring the first 18 batters before Marcus Semien led off the seventh with a single. The Venezuelan left-hander ran into more trouble in the inning when Lowe connected on an elevated slider and drove it into the right-field stands to put the Rangers up 2-1.

It was the first time Suarez had a no-hitter through six innings. His previous low in hits allowed at that point of a game was two, which happened twice this season.

The Angels regained the lead with a pair of runs in the seventh. Fletcher started the inning with a hit and advanced to second when Kurt Suzuki was hit by a pitch. Soto then ripped a double into the right-field gap off Jonathan Hernandez (2-3) to drive in Fletcher. Suzuki tried to score from first, but Semien made a great relay throw to catcher Jonah Heim from shallow right field to get Suzuki out at home. Heim made a hard tag to Suzuki's head, but Suzuki remained in the game.

Matt Thaiss then hit a hard grounder to Semien at second base, but Soto beat the tag at home to give the Angels the lead.

Ryan Tepera retired the Rangers in order in the ninth for his sixth save.

The Angels opened the scoring in the second. Jo Adell got aboard with a one-out double to left-center and then scored when Suzuki blooped a single into shallow center that Semien could not get to it in time.

Texas' Cole Ragans went four innings and gave up one run and four hits and struck out two.

Angels: CF Mike Trout sat out after fouling a ball off his right foot during the seventh inning of Friday night's game.

Rangers: Have not named a starter. RHP Tyson Miller (0-3, 5.40 ERA) is expected to work most of the innings.