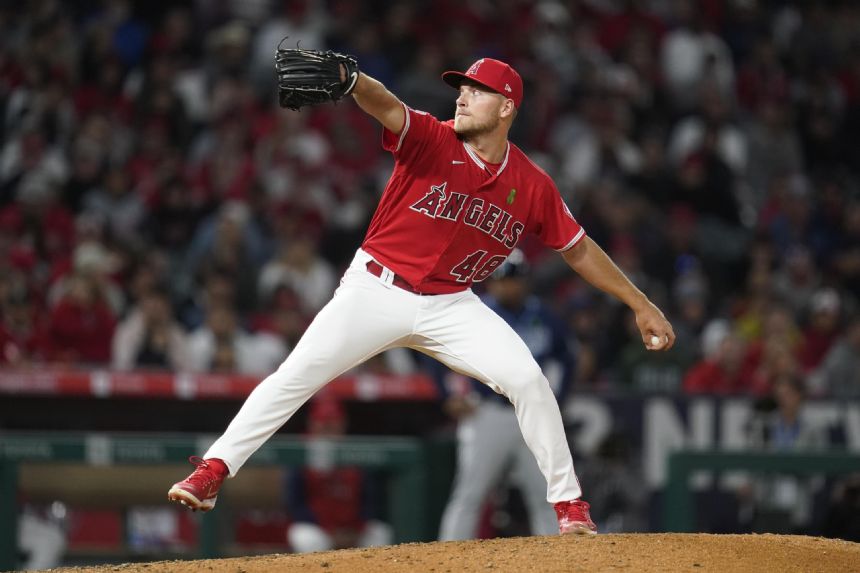 The 22-year-old left hander threw a career-high 108 pitches in his 11th big league start, striking out two and walking one. He completed the 12th no-hitter in franchise history when Yandy Diaz grounded out shortstop Andrew Velazquez to end the game.

He got a crucial assist from the official scorer in the seventh.

Brett Phillips reached with one out when first baseman Jared Walsh ranged to his right and bobbled Phillips' grounder. The crowd of 39,313 at Angel Stadium cheered and Walsh clapped moments later when the videoboard showed the play was ruled an error.

Otherwise, Detmers hardly had any close calls. He retired his first 15 hitters before Taylor Walls drew a lead-off walk in the sixth. Third baseman Anthony Rendon then made a nice leap to snag Vidal Brujan's line drive, and Kevin Kiermaier ground into a double play to end the inning.

Detmers made a nice defensive play in the fifth when he quickly snagged a grounder up the middle by Randy Arozarena.

The son of a former minor league pitcher with the St. Louis Cardinals, Detmers was the 10th overall pick in the 2020 draft out of the University of Louisville and made his big-league debut last year.

It was the first time Detmers had gone even seven innings in a game. His previous career best was six last season against Houston. He'd never thrown more than 97 pitches in a big league game, either.

The last Angels' no-hitter was on July 12, 2019, when Taylor Cole and Felix Pena combined for one against the Seattle Mariners in the team's first home game following the death of starting pitcher Tyler Skaggs.

There were a record nine no-hitters across the majors last season. The last by a rookie was Arizona's Tyler Gilbert against San Diego on Aug. 14, 2021. It was Gilbert's first start.

Mike Trout had two home runs for his 22nd multi-homer game of the season and drove in three. Anthony Rendon homered in his first major league at-bat as a left-handed hitter in the eighth when Phillips, usually an outfielder, took the mound in the blowout. Chad Wallach also homered, and the Angels won their third straight.