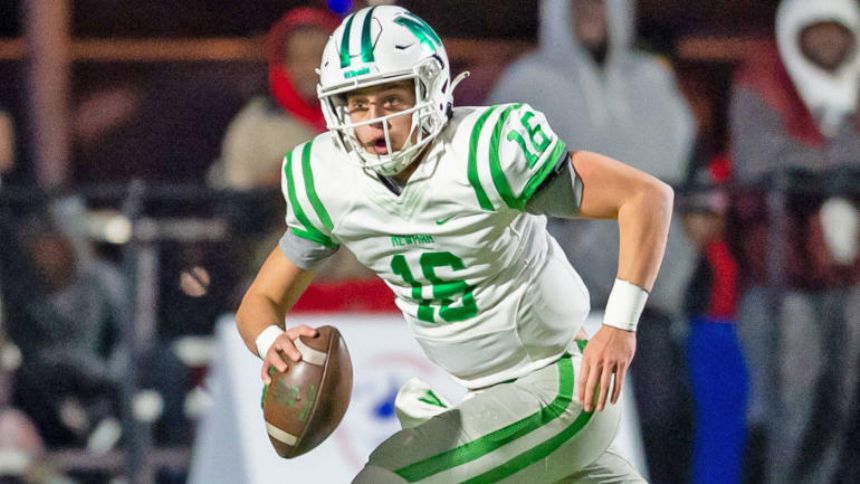 Arch Manning had the opportunity to follow his grandfather Archie and uncle Eli to Ole Miss. He could have followed in the footsteps of his other uncle, Peyton, and played at Tennessee. He was given an open line to join the greatest college football dynasty of all time at Alabama. He also could have linked up with the defending champions at Georgia. Instead, Manning opted to write his own legacy.'

With his first-ever tweet, Arch Manning, No. 1 overall quarterback in the Class of 2023 and arguably the highest-profile prospect in the history of recruiting,'. Given his famous name and perfect 1.0000 recruiting score, Manning's pledge brings the Burnt Orange back to the front of the national stage.'

That 1.0000 rating in the 247Sports Composite is the most prestigious mark in recruiting. Only seven players, three of whom were quarterbacks, received that perfect score in the metric. All three of those quarterbacks quarterbacks -- Vince Young, Quinn Ewers and now Manning -- played or will play at the University of Texas. If Manning eventually signs and Ewers sticks around, the "perfect" pair will be teammates on the Longhorns' 2023 roster.'

Perhaps most important to Manning, though, is the timing. As a member of the 2023 class, he will almost certainly be the starting quarterback at Texas when the Longhorns enter the SEC, which is slated to happen for the 2025 season. If everything works out, Manning will have an opportunity to be a transformational talent in the vein of Johnny Manziel at Texas A&M. That's something neither Alabama nor Georgia could possibly offer.'

Committed to the University of Texas. #HookEm pic.twitter.com/jHYbjBaF5K

Granted, neither Ewers nor Manning have thrown a collegiate pass. And out of the five prior perfect recruits, four never won a national championship: Robert Nkemdiche, Jadeveon Clowney, Rashan Gary and Ernie Sims. None of them were quarterbacks, of course, and Young left Austin, Texas, as one of the most legendary signal-callers in history.

With his famous name and a historic rating behind him, Manning will have those expectations thrust upon him from the start.'

With Manning aboard, expect Texas recruiting to supercharge, especially on offense. The Longhorns are prioritizing five-star wide receiver Johntay Cook II and four-star running back Cedric Baxter Jr.. Manning's high school teammate, Will Randle, is already aboard as a three-star tight end recruit.

Expect more high-profile players to commit as the process winds down into the early signing period in December and National Signing Day in February. The chance to play with Manning should be an unmatched draw. Anything short of another top-five recruiting class would be a tremendous disappointment for Texas.

When Ewers, a former No. 1 recruit himself, decommitted from Texas on Oct. 28, 2020, and later signed with Ohio State, it portended the end of the Tom Herman era in Austin. (Ewers transferred to Texas in December 2021.)

Barely 18 months later, Sarkisian has succeeded where Herman failed. Sarkisian could have a similarly difficult time keeping Manning aboard, especially if the 'Horns fail to meet expectations in 2022. However, if Manning makes it to campus, he will be a game-changing name for Sarkisian and the program long term.'

Roster management will be critical

Manning is expected to enroll ahead of the 2023 season, likely in the spring. If the Texas quarterback room goes according to plan, that means the Longhorns could have as many as five scholarship signal callers on the roster heading into the season.'

Hudson Card is the only quarterback on the roster with starting experience. However, former No. 1 recruit Ewers, who transferred from Ohio State in December 2021, is a favorite to win the starting job in 2022 over Card, four-star signee Maalik Murphy and underclassman Charles Wright. By the time the 2023 season comes around, Ewers will likely have a full season of incumbency on his side.'

Manning is a special talent and should compete for the starting job right away. However, Ewers is a singular talent of his own after earning No. 1 overall rankings coming out and 0.9999 rating. There's a strong chance Ewers hangs onto the starting job heading into 2023 over the younger Manning. However, Ewers would be eligible for the NFL Draft after just one season of overlap, clearing the way for Manning to take over in 2024.

The tricky part is this: What if Manning beats Ewers out for the starting job? Ewers would likely be stuck either serving as backup at Texas or sitting out a year in residence and potentially delaying his move to the NFL as he has already used his one-year transfer exception. The only other option would be him receiving a waiver to play immediately elsewhere, and while players have been more successful petitioning for those recently, it is hardly a sure thing.

If Ewers wins the quarterback job as expected in 2022, it likely means Card will enter the transfer portal at some point. Murphy and Wright could also consider leaving if Manning is slotted as the next in line. The only downside to having a hyper-talented quarterback room is trying to keep enough signal-callers on the roster in a virtual free market. With talents like Manning and Ewers, though, any coaching staff would take those issues. '

Where do the contenders go from here?

Both recent national championship winners, Georgia and Alabama put plenty of eggs into the Manning basket. Bama got out ahead of the Manning commitment early and flipped No. 56 overall QB Eli Holstein to lead its recruiting class. The Crimson Tide have also signed five-star QB Ty Simpson and top-100 QB Jalen Milroe across the last two classes. Depth at the position won't be an issue.

The Bulldogs, meanwhile, have 12 offers out to quarterbacks, according to 247Sports, nine to signal callers that are already committed elsewhere. Georgia could prioritize new options, like local top-100 product Dylan Lonergan, or lean on the depth it has built over the last three classes.'

Ole Miss made perhaps as public a case as anyone to land the double-legacy. Coach Lane Kiffin wore Eli's Giants jersey to his jersey retirement, and the Rebels painted "Manning" in the end zones for the day. Naturally, Arch was visiting for that game. However, Ole Miss opted to take three-star QB Marcel Reed, No. 431 overall, from Montgomery Bell Academy in Nashville. The Rebels are also still in the Jaden Rashada sweepstakes, which will be resolved on Sunday, June 26 live on AP Sports HQ.'