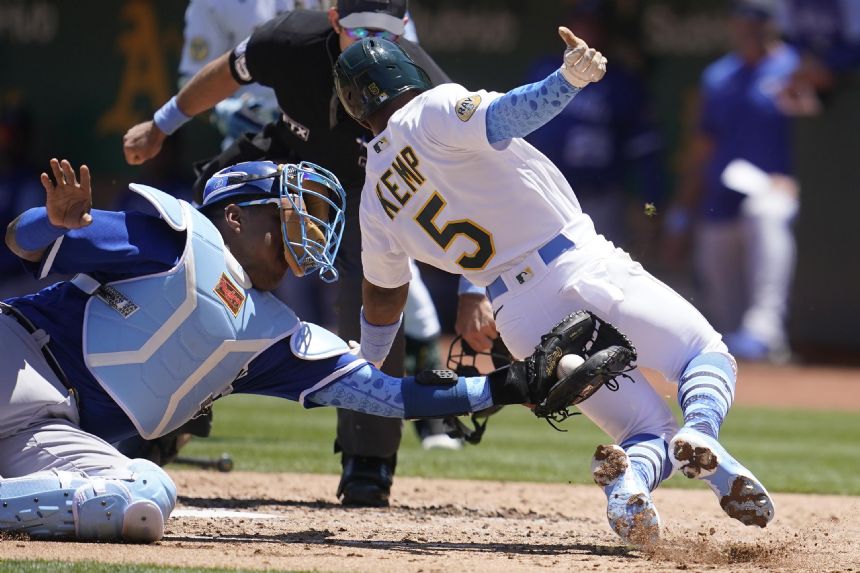 OAKLAND, Calif. (AP) - Jared Koenig pitched into the sixth inning for his first career win and combined with three relievers on a three-hitter, helping the Oakland Athletics beat the Kansas City Royals 4-0 on Sunday to end an eight-game home losing streak.

Seth Brown had three hits, including his first home run at the Oakland Coliseum in nearly a year. Sean Murphy also connected to help the A's avoid a three-game sweep.

Oakland, which won for the third time in 18 games overall, still owns the worst record in baseball at 23-45.

The Royals stranded six runners in scoring position and were shut out for the ninth time this season.

Koenig (1-2) gave up two hits over 5 2/3 innings. The A's left-hander walked four and had to pitched around traffic much of the afternoon to avoid becoming the fourth pitcher in Oakland history to lose his first three starts.

Kansas City loaded the bases against Koenig with two outs in the sixth before Domingo Acevedo struck out Michael A. Taylor to end the inning.

Acevedo retired four batters. Zach Jackson and Zam Moll set down three each to close it out.

Brown crushed a 1-2 slider from Brady Singer onto the steps beyond the left field fence. It was Brown's team-leading ninth home run and first in Oakland since Aug. 8, 2021.

Murphy's three-run drive off Jose Cuas in the sixth came after Brown singled and Ramon Laureano was hit by a pitch from Singer.

The Royals have not swept a series since winning three consecutive games against the Cubs at Wrigley Field from Aug. 20-22, 2021.

The A's had a run taken away by replay in the third after Tony Kemp scored from first base on Brown's single that Taylor bobbled in center field. Kemp slid into home plate and appeared to narrowly beat the relay throw from second baseman Whit Merrifield. Royals manager Mike Matheny challenged and the call was overturned.

Royals: LHP Kris Bubic (0-4, 8.36 ERA) faces the Angels in the opener of a three-game series in Los Angeles. Bubic lost to the Angels in June when he was tagged for six runs in four innings.

Athletics: Manager Mark Kotsay has not announced a starter for Tuesday's game against the Mariners at the Coliseum.