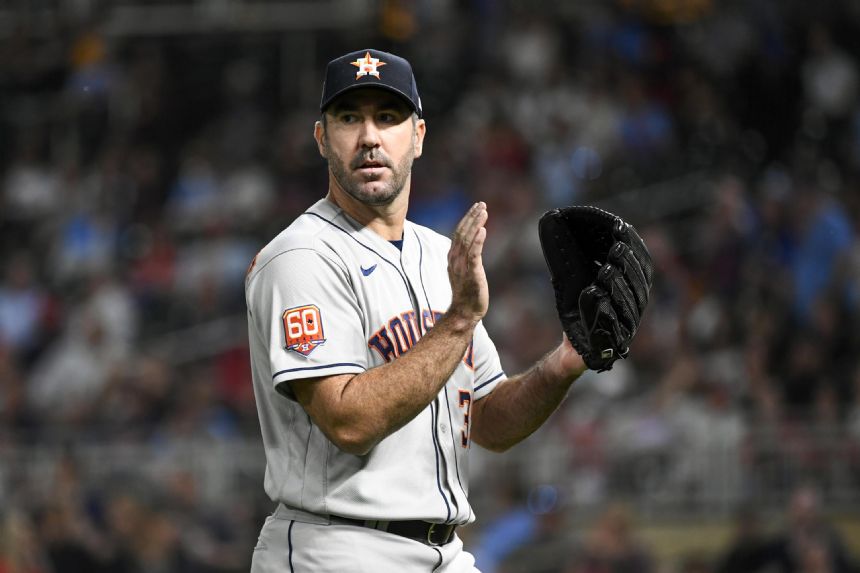 MINNEAPOLIS (AP) - Justin Verlander missed out on his fourth no-hitter by five outs but still faced the minimum through eight innings, and the Houston Astros beat the Minnesota Twins 5-0 Tuesday night for their eighth straight win.

Twins third baseman Gio Urshela singled to right field with one out in the eighth to end Verlander's bid. The 39-year-old right-hander, in his first season back from Tommy John surgery, finished the eighth by getting Royce Lewis to ground into a double play.

Verlander struck out five and walked two on 89 pitches. He was vying to tie Sandy Koufax for second on the career no-hitter list. Nolan Ryan holds the record with seven.

Jeremy Pena drove in the first two runs for the Astros. Alex Bregman also had two RBIs, including a double to left in the fifth that drove in Jose Altuve.

Twins starter Joe Ryan (3-2) struggled to find the strike zone. The right-hander issued a walk in each of his five innings and allowed four runs.

NEW YORK (AP) - Aaron Judge hit a mammoth three-run drive in the ninth inning for his first walk-off home run in the major leagues to give New York a comeback victory over Toronto.

Giancarlo Stanton tied it with a modest three-run shot in the sixth, and the Yankees rallied for their 14th victory in 16 games after three Toronto ejections left the angry Blue Jays seeing red.

George Springer launched a leadoff homer for Toronto, and Lourdes Gurriel Jr. hit a tiebreaking double in the eighth that helped the Blue Jays take a 5-3 lead.

No. 9 batter Jose Trevino and DJ LeMahieu drew consecutive one-out walks in the ninth from Jordan Romano (1-2) before Judge sent a hanging 1-2 slider 450 feet into the second deck in left field.

Wandy Peralta (1-0) pitched a hitless ninth for the win.

Devers' 432-foot blast off Kyle Wright (3-2) hit the center-field scoreboard behind the Braves' bullpen. Devers also had a double and a walk.

WASHINGTON (AP) - A rat scurried through the outfield grass just before James McCann's sacrifice fly drove in the go-ahead score during a three-run sixth inning, and Carlos Carrasco nearly got to the seventh again, helping New York beat Washington.

The episode brought to mind one from a year ago - May 8, 2021, to be exact - involving a Mets club on the way to a disappointing 77-85 finish: Francisco Lindor and Jeff McNeil got into an argument during a game after they combined to flub a grounder. Soon after, Mets players rushed into the tunnel near the dugout.

Carrasco (3-1) gave up two runs in 6 2/3 innings. He began the day as the only pitcher in the majors who had gone more than seven innings in at least two starts.

In the sixth, once Nationals starter Patrick Corbin had been replaced by new call-up Carl Edwards Jr. (0-1), New York broke through, showing why it is now 21-10.

Lucas Giolito (2-1) went seven innings and gave up just the one run that came on Josh Naylor's homer to win his second straight start. He allowed six hits, struck out five and walked one.

The White Sox won their seventh of eight games, with the only blemish blowing a six-run lead in the ninth Monday night and losing in 11 innings.

Harrison Bader hit an inside-the-park home run in the sixth - the first for St. Louis at the current Busch Stadium and first for the Cardinals at home since 1985.

Bradish (1-1) pitched seven innings for his longest outing this season and his first career win. He gave up four hits, including the homer to Bader. Felix Bautista got the final out for his first career save.

Nevin gave Baltimore a 3-0 lead when he hit a one-out home run into the left field bullpen in the fourth, leading St. Louis to pull rookie pitcher Packy Naughton (0-1).

Perez (1-2) struck out six without a walk and was charged with four runs, but only one of those was earned.

Joe Barlow worked a perfect ninth for his sixth save in as many opportunities.

Texas had three consecutive singles off Brad Keller (1-3) after Seager's two-out homer in the first, with Kole Calhoun's two-run hit making it 3-0.

Jace Peterson broke a 1-1 tie in the sixth with the first of his two doubles for the NL Central-leading Brewers, who ended a three-game losing streak.

Hader worked around a leadoff walk in a hitless ninth and became only the third pitcher with saves in his first 12 appearances of a season after Lee Smith in 1994 and Jose Mesa in 2005.

Wandy Peralta (2-1) allowed one run and four hits in 5 2/3 innings with a season-high eight strikeouts and one walk. Hunter Greene (1-5) lost his fifth straight start since winning his major league debut at Atlanta on April 10.