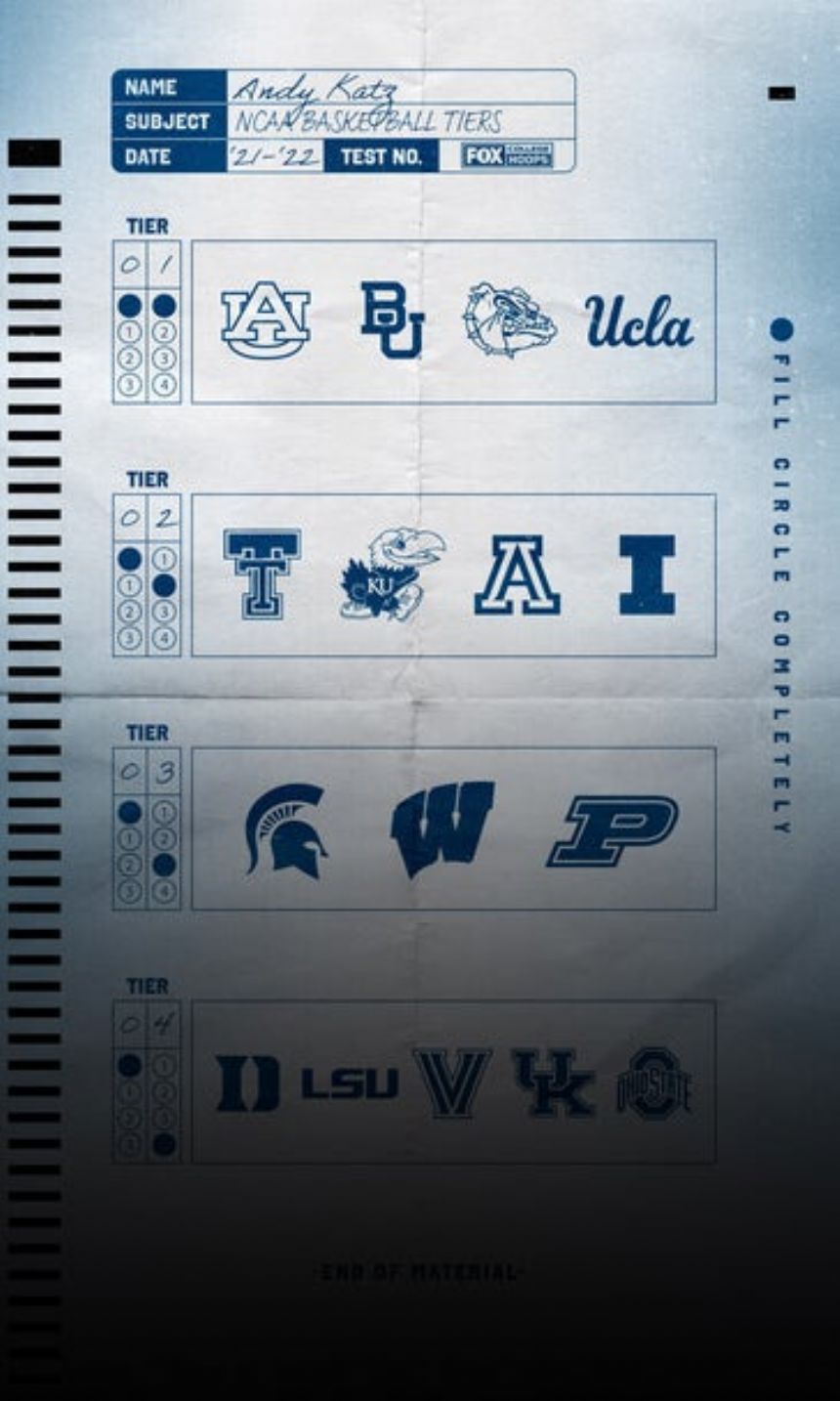 With Baylor getting beaten at home by Texas Tech this week, the shakeup has begun.

Following the Bears' 65-62 loss to the Red Raiders, it's time to tweak the tiers.

Last week, we released our first edition of "Player of the Year Tiers," but when the No. 1 team in the nation loses its first game of the season, it's time to get back to looking at the top 16 teams.

For the first time in a few weeks, a team other than the Baylor Bears lands in the first spot of Andy Katz's Tiers.

Auburn: The Tigers have looked the part of a No. 1 team since a gutsy, wild win at rival Alabama. Jabari Smith is a first-team All-American and could be the top pick in June.

Baylor: The Bears got bitten by Texas Tech. Yes, it was at home, but it was decided late, and I'm not about to move the Bears off the first tier for one loss.

Gonzaga: The Zags are back in the Tiers' good graces with some dominant performances. Gonzaga will get its first serious WCC test this week against BYU.

UCLA: The Bruins came off their pause with a healthy Cody Riley and a renewed purpose to resume their place as one of the top teams.

The UCLA Bruins topped Marquette 67-56 and improved to 9-1 on the season behind 24 points from Jaime Jaquez Jr.

Texas Tech: The Red Raiders have skyrocketed up in the tiers and will do the same in the AP poll after beating Kansas at home and winning at Baylor. They were depleted but never defeated and are bringing the fight to the Big 12.

Kansas: The Jayhawks survived Iowa State after losing to Texas Tech. Ochai Agbaji is still playing All-American ball. But the offense needs to be a bit more diversified.

Arizona: The Wildcats have one blemish, at Tennessee. They've had a sensational season so far and will likely only get better in the next two months.

Illinois The Illini are playing the best basketball in the Big Ten, and Kofi Cockburn and Trent Frazier are becoming a 1-2 punch that is difficult to stop.

Michigan State: The Spartans survived Minnesota on Wednesday. They have been able to find quality playmakers with Tyson Walker and AJ Hoggard, and they have a rising star in Max Christie.

Wisconsin: The Badgers are rolling and might have the national player of the year in Johnny Davis. Wisconsin's week included a win at Purdue, a home win over Iowa and a road win at Maryland.

Purdue: The Boilermakers are still a viable threat to win the league and title. Defending late against quick guards is the problem they need to solve.

Andy Katz takes a look at why the Purdue Boilermakers are the toughest matchup in the post of any team in men's college basketball.

Duke: The Blue Devils lost at home to Miami but then rebounded without Coach K to win at Wake Forest.

LSU: The Tigers lost to Auburn but have beaten Kentucky, Tennessee and Florida. It's time to recognize that these Tigers are legit.

Villanova: The Big East will go through Villanova again. End of story.

Kentucky: Sahvir Wheeler has been the ultimate playmaker, but Oscar Tshiebwe's rebounding numbers are ridiculous. He's a top-three player of the year candidate.

Ohio State: The Buckeyes edge Houston for this last spot. Ohio State has a star in EJ Liddell and a super freshman in Malaki Branham. This team is only beginning to scratch the surface of its potential.