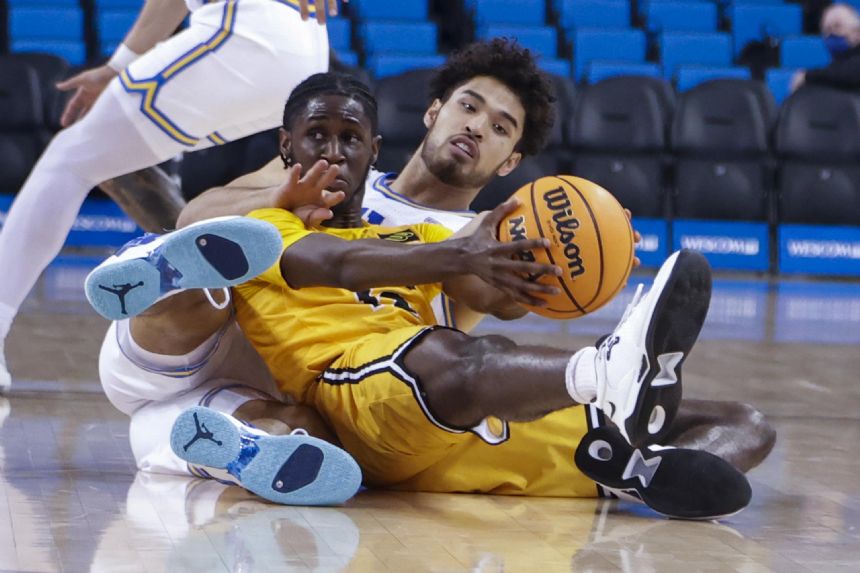 The general public was barred from the hastily arranged game between two teams that already met this season. The Beach were beaten 100-79 at Pauley Pavilion on Nov. 15.

The Bruins (9-1) hadn't played since winning at Marquette on Dec. 11. Since then, they had three games canceled and three postponed because of COVID-19 issues among themselves or their opponents.

Bernard's points were one off his career high and his four 3-pointers tied his career best.

UCLA's return wasn't without cost. Second-leading scorer Jaime Jaquez Jr. sprained his right ankle with 1:56 remaining in the first half. He watched the rest of the game from the bench with his ankle heavily wrapped.

The Beach ended a 23-game hiatus on Wednesday with a 90-64 victory over Westcliff, the team's first game since Dec. 12. The Beach had six straight games canceled because of COVID-19.

Jadon Jones scored a career-high 27 points for the Beach (4-8) as their only player in double figures.

Long Beach State shot better in the second half, but it couldn't slow UCLA's offense. The Bruins built their largest lead of the game, 69-46, on consecutive 3-pointers by Bernard and Jaylen Clark, his first 3 of the season.

The Beach took the lead to start the game before UCLA ran off 11 straight points, bookended by 3-pointers from Tyger Campbell and Juzang. It was part of a 34-14 spurt that ended the half with UCLA leading 45-29.

The only spectators allowed were family of the players and it appeared between 75 and 100 people were on hand, most sitting in the upper level. UCLA pumped fake crowd noise into the arena and the Beach's bench chanted and clapped at times.

The game marked the long-awaited return of starting forward Cody Riley, who sprained his left MCL four minutes into the Bruins' season opener on Nov. 4. He finished with eight points, two rebounds and three fouls in 20 minutes.

Long Beach State: The Beach are about to get into the heart of their Big West schedule, hosting three straight league games over the next week. The team's next several opponents are local and the Beach won't have to leave the greater LA area until Jan. 29 when they travel to UC Davis.

UCLA: More than just a cliche in the age of COVID-19, the Bruins are taking things day-by-day. The Oregon and Oregon State are scheduled to visit next week, but both are dealing with coronavirus issues. There are still games against Arizona, Arizona State and Stanford to be made up, too. If they can't play a Pac-12 opponent, the Bruins will be working the phones to line up a nonconference foe on their own.

UCLA: At California on Saturday, with the Bruins trying to extend their eight-game winning streak against the Bears.