Betts, Muncy lead Dodgers to 4-3 win over Giants in 10 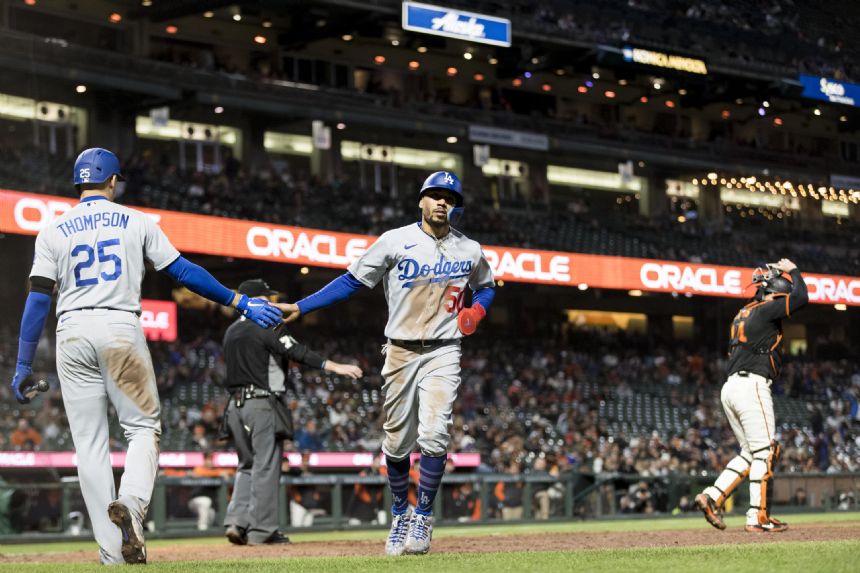 SAN FRANCISCO (AP) - Mookie Betts had an RBI double in the 10th inning, Max Muncy drew a bases-loaded walk and the Los Angeles Dodgers held on to beat the San Francisco Giants 4-3 on Sunday night.

The Dodgers beat the Giants for the 15th time in 19 meetings this season, getting that many wins for the first time in the rivalry that goes back to 1884.

Betts' double with one out in the 10th off John Brebbia (6-2) drove in automatic runner Cody Bellinger to give the Dodgers a 3-2 lead. One out later, Brebbia intentionally walked Freddie Freeman and Justin Turner to load the based. Thomas Szapucki then walked Muncy to force in another run before striking out Trayce Thompson.

In the bottom of the inning, Andrew Jackson walked Thairo Estrada and, one out later, gave up an RBI single to Wilmer Flores with automatic runner Heliot Ramos scoring from third to pull the Giants within one. J.D Davis then struck out but Evan Longoria walked to load the bases. Justin Bruihl came on and got LaMonte Wade Jr. to ground out to first to pick up his first career save.

Dodgers closer Craig Kimbrel (5-6) pitched a scoreless night to pick up the win.

The Giants tied it 2-2 in the eighth on J.D. Davis' two-out RBI double off left-hander Alex Vesia. However, for the second time in the game the Giants lost a potential run when Davis' hit bounced over the wall, preventing Estrada from scoring from first. After Longoria was walked intentionally to load the bases, Wade struck out to keep the score tied.

Estrada also would have scored on Flores' double in the fourth against Dodgers starter Andrew Heaney that also bounced into the bleachers. The Giants did not score in the inning.

Heaney pitched four scoreless innings before he was pulled after 65 pitches with the Dodgers leading 1-0. Heaney had just struck out Longoria and Joey Bart to strand the bases loaded in the fourth.

A 20-minute rain delay during the top of the inning might have played into manager Dave Roberts' decision. The Dodgers have used Heaney cautiously after two stints on the injured list this year.

Justin Turner's RBI double in the top of the fourth gave the Dodgers the early lead.

The Giants tied it in the fifth against Caleb Ferguson on Trea Turner's two-out throwing error on a grounder by Estrada. Lewis Brinson, who doubled to open the inning, scored the tying run.

Cobb allowed two runs and four hits in 5 1/3 innings, walking three and striking out three. The right-hander has a 1.57 ERA over his past five starts.

The game was played amid a rare September storm for San Francisco, featuring winds that gusted to 30 miles an hour and a squall. They rain delay occurred in the fourth after Los Angeles took the lead against Cobb on a leadoff walk to Freeman and Justin Turner's double into the left-field corner. Cobb struck out Chris Taylor when play resumed to strand Turner at second base.

Giants: LHP Alex Wood's season is over. Manager Gabe Kapler said Wood was not cleared to resume throwing this weekend after rehabbing a left-shoulder impingement, which landed him on the IL on Sept. 3. With so few games left, the club elected to shut him down. Wood finished his second season in San Francisco with an 8-12 record and 5.10 ERA in 26 starts. The 31-year-old is halfway through the two-year, $23 million contract he signed last winter.

Dodgers: LHP Tyler Anderson was expected to fly to Los Angeles on Sunday after his wife, Taitym, gave birth to their first son, Tucker. Anderson threw a bullpen session in Arizona on Sunday and is expected to come off the paternity list Tuesday to start one of the doubleheader games against the Diamondbacks at Dodger Stadium.

Giants: San Francisco claimed RHP Jharel Cotton off waivers from the Twins, bringing the 30-year-old back to the Bay Area. Originally drafted by the Dodgers, Cotton was traded to Oakland in a 2016 deadline deal that also netted starter Frankie Montas and sent LHP Rich Hill and OF Josh Reddick to the Dodgers. Cotton's career has been beset by arm injuries, but he was throwing well for the Twins this season in relief (2.83 ERA, 1.114 WHIP in 35 IP). Cotton is expected to join the Giants in Denver on Tuesday night. To clear a 40-man spot the Giants designated OF Willie Calhoun for assignment after a four-game stint in San Francisco. ... INF Jose Rojas, who was designated for assignment Friday, cleared waivers and elected free agency.

Dodgers: LHP Clayton Kershaw (8-4, 2.44 ERA) goes for his 20th career win against the Diamondbacks in the opener of a four-game series at Dodgers Stadium on Monday night. RHP Merrill Kelly (12-6, 3.01) stars for Arizona.