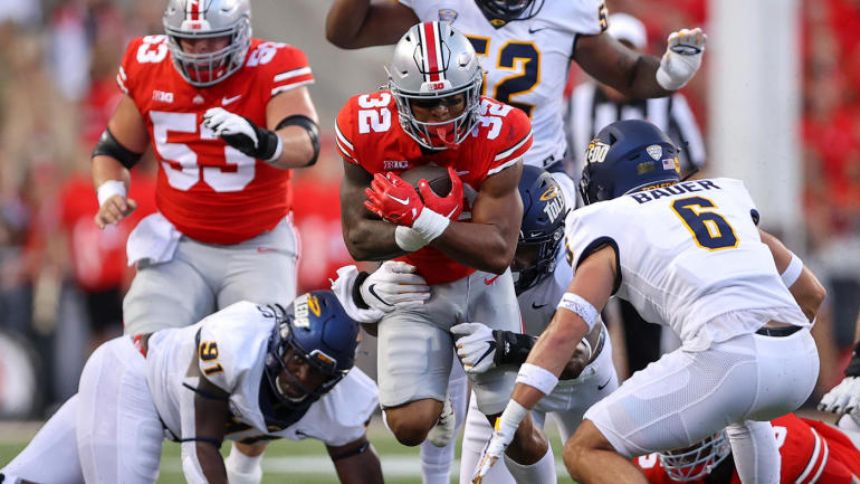 With so many college basketball blue bloods thriving on the gridiron early in the 2022 season, let's keep the synergy between sports going for a moment. Let's take a look at No. 4 Michigan as it prepares to host unbeaten Maryland -- a school that many would consider to be better known for hoops.'

It's hard to argue the Wolverines don't'deserve'their lofty ranking. They are, after all, a recent College Football Playoff team that has outscored its first three opponents 166-17. However, if you applied the Quadrant system that college basketball uses to categorize games, the Wolverines would be one of only a handful of Power Five teams thus far to have exclusively played Quad 4 games. Home victories over Colorado State, Hawaii and UConn are the football equivalent of beating Alcorn State, Fairleigh Dickinson and Eastern Illinois on the hardwood.

With offensively lifeless Iowa and entirely inept Nebraska serving as Michigan's cross-division opponents, the Wolverines' schedule is comically easy for a team competing in what's often regarded as one of the most difficult divisions in college football. No. 14 Penn State and No. 3 Ohio State are the only teams on Michigan's schedule currently ranked.

What's the point of all this? It may be that style points matter this year for Michigan if it wants any margin for error in the playoff picture. Winning the Big Ten Championship Game as a one-loss team would surely get the Wolverines in, but if they need to make it in as a one-loss non-champion, it stands to reason the weakness of this schedule could wind up as a serious hindrance.

It's early to be contemplating such matters, but it will be interesting to see if Wolverines coach Jim Harbaugh feels compelled rack up some style points to stand out amid a schedule that may only provide rare moments of adversity.

As the Week 4 action approaches, let's take a deeper dive into the Big Ten slate and make some picks.

Maryland at No. 4 Michigan

Michigan's 3-0 start came against Colorado State, Hawaii and UConn, teams that are ranked Nos. 113, 125 and 126, respectively, in our AP Sports 131. The Wolverines scored at least 50 points in each of those games, but it stands to reason that the offense will return to Earth this week against its first competent opponent. No one is going to mistake this Maryland defense for the '85 Bears, but at least it has a pulse. Maryland overcame a whopping 15 penalties to beat a decent SMU team last week. Some of those automatic touchdowns Michigan scored against inferior opponents may wind up as mere field goals this week.'

Maryland is also due for some offensive regression as it faces the best defense it has played so far. When Maryland faced a good team for the first time last season (Iowa), quarterback Taulia Tagovailoa threw five interceptions. Even if the Wolverines do reach the upper 30s or low 40s, this under still looks likely to hit.'Pick: Under 66.5

Wisconsin at No. 3 Ohio State

These teams have failed to surpass 57 total points in each of their past four meetings, and it's going to take a breakthrough performance from the Wisconsin offense for the over to hit in this game. The Badgers scored only 14 in a home loss to Washington State, and the early indications from the Buckeyes suggest their defense is better under first-year coordinator Jim Knowles.

Ohio State showed us in a 21-10 victory against Notre Dame in Week 1 that its offensive explosiveness is no lock to translate against quality opponents. Wisconsin is stout defensively, like the Fighting Irish, and should be able to force the Buckeyes to punt at least a few times in a game the Badgers might like to play at a slow pace.'Pick: Under 57

Minnesota quarterback Tanner Morgan has barely been touched through three games. He's been sacked only once, and the Golden Gophers are allowing pressure on just 16.7% of dropbacks, per TruMedia and Pro Football Focus data. That is tied for fifth-best in the country, and it's likely unsustainable in the Big Ten. Minnesota's opponents have been Western Illinois, Colorado and New Mexico State. That's an FCS team and two of the worst teams in the FBS.

The Michigan State pass defense showed last week in a 39-28 loss at Washington that the demons of 2021 are still alive. However, Minnesota's passing attack isn't nearly as explosive as Washington's and its offensive line will be tested in a far more significant way. This will also be the first road game of the season for the Golden Gophers, and Michigan State should be able to hold serve at home against an untested opponent.'Pick: Michigan State (+3)

The point total here may be inflated by the fact that the teams totaled 62 points last season in a 38-24 win for Cincinnati. Neither team surpassed 400 total yards in that game, however, and the score was driven up by six combined turnovers and a 99-yard kickoff return for a touchdown by Cincinnati. Neither offense has dramatically improved from last year, and Cincinnati's defense appeared to find a rhythm in last week's 38-17 win over Miami (Ohio).

After finding themselves behind 17-7 early, the Bearcats held the Redhawks scoreless on their final 10 possessions and allowed just 83 total yards on those drives while forcing six punts, two turnovers on downs and an interception. Look for some of that defensive mojo to carry over into this game as the Bearcats keep building their identity following the departure of nine NFL Draft picks from last season's College Football Playoff team.'Pick: Under 57.5

It's well-established just how terrible the Iowa offense is, and that gruesome reality has overshadowed just how dominant its defense is yet again. The Hawkeyes are No. 1 nationally in yards per play allowed at 2.92 and have given up just one touchdown through three games. Rutgers proved last week just how ill-equipped it is to move the football in this matchup. The Scarlet Knights squeaked out a 16-14 win over Temple, mustering just 201 total yards and 12 first downs against an Owls squad that was torched for 500 yards in a 30-0 loss to Duke in Week 1.

Rutgers will be fortunate to score in this game, and Iowa may actually benefit from going on the road for the first time this season. Angst is high in Iowa City right now about this program's offensive ineptitude, but there were at least some signs of life from the running game in a 27-0 win over Nevada last week. The Hawkeyes' excellent punter, Tory Taylor, should set his team up well in the field position game, leading to some field goals and maybe a touchdown or two. The defense will handle the rest.'Pick: Iowa -7.5