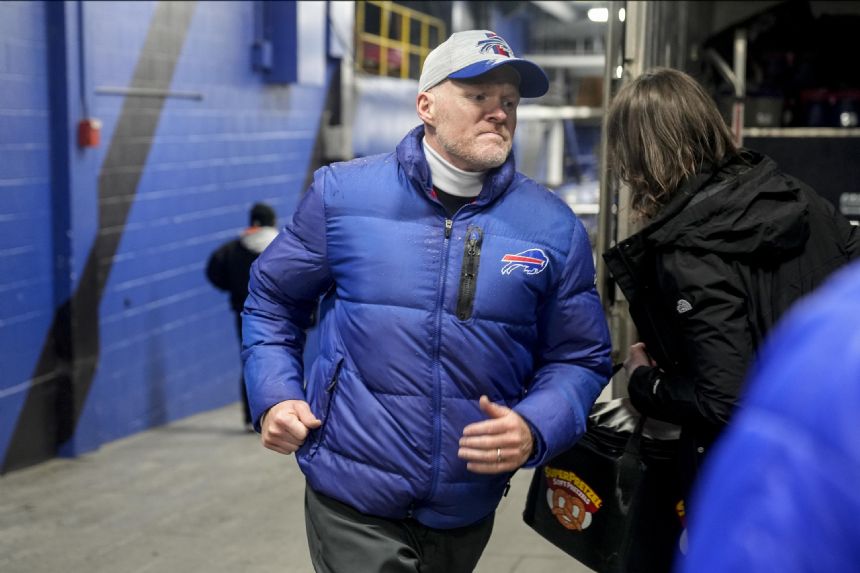 ORCHARD PARK, N.Y. (AP) - Projecting the Buffalo Bills' payroll to already be over the salary cap, general manager Brandon Beane on Tuesday said he won't be making any big splashes in free agency this offseason.

And this time, Beane said he means it.

Reminded he made a similar vow a year ago, and then surprising the NFL by signing Von Miller to a six-year contract in March, Beane conceded he's going to have trouble simply re-signing his own pending unrestricted free agents.

"I got no idea," Beane said, when specially asked about the chances of retaining linebacker Tremaine Edmunds and safety Jordan Poyer. "Would love to keep them all, and we'll do our best."

With the NFL having yet to release even a range of what the cap limit might be for next season, Beane is already projecting the Bills to be over it with more than $240 million in salaries already on the books. And that means having to make cuts before Beane can even start signing anyone.

"We're going to have to be creative," he said, during a near hour-long session two days after the Bills season ended with a 27-10 loss to the Cincinnati Bengals in the divisional round.

How creative Beane can be remains to be seen, given the loss to the Bengals exposed Buffalo's deficiencies on both sides of the ball, and with Buffalo having 21 players off a 13-win team set to hit the market.

"We're going to put as strong a team as we can out there," Beane said, placing a priority on the draft and luring low-cost free agents. "It'll be on me and our scouting staff to make the right moves."

This offseason marks a transition in Beane's roster-building and cap-management approach in the six years since his arrival.

In that time, the Bills have been transformed from being a perennial loser to a three-time AFC East champion, and coming off their fourth consecutive playoff appearance.

After initially purging payroll and stockpiling draft picks in his first two years, Beane moved to committing much of Buffalo's payroll to locking up core players, including quarterback Josh Allen, whose six-year, $258 million contract kicks in next season.

That leaves Beane facing difficult decisions on retaining key contributors, while having to set aside payroll for next year with defensive tackle Ed Oliver, receiver Gabe Davis and safety Micah Hyde entering the final year of their respective contracts.

"We may have to rework a few contracts. It's not like we're not going to do that," Beane said. "But I also don't want to in two years be $100 million over the cap like we've seen teams."

The first step for Beane is evaluating his roster over a season in which the Bills' depth was tested by injuries, their schedule disrupted by two winter storms, and the team's emotional state shaken by the sight of safety Damar Hamlin going into cardiac arrest and having to be resuscitated on the field in Cincinnati on Jan. 2. Hamlin has recovered enough to visit with his teammates while attending Buffalo's loss to the Bengals.

Rather than focus solely on the season-ending loss, Beane saw his team play with too many inconsistencies throughout the season.

The Bills' three regular-season losses were decided by a combined eight points, and Buffalo was riding an eight-game winning streak before losing to Cincinnati.

On the downside, the Allen-led offense at times lacked rhythm, and the quarterback led the NFL in committing 20 turnovers (14 interceptions and six lost fumbles). Buffalo's defensive front, meantime, sagged after Miller was sidelined by a season-ending knee injury in November.

"We're a long way from where we were when we got here, but we know there's work to do. And everyone in this building is frustrated that we didn't get the result that we wanted," Beane said. "But no one's feeling sorry for themselves. It's back at it."