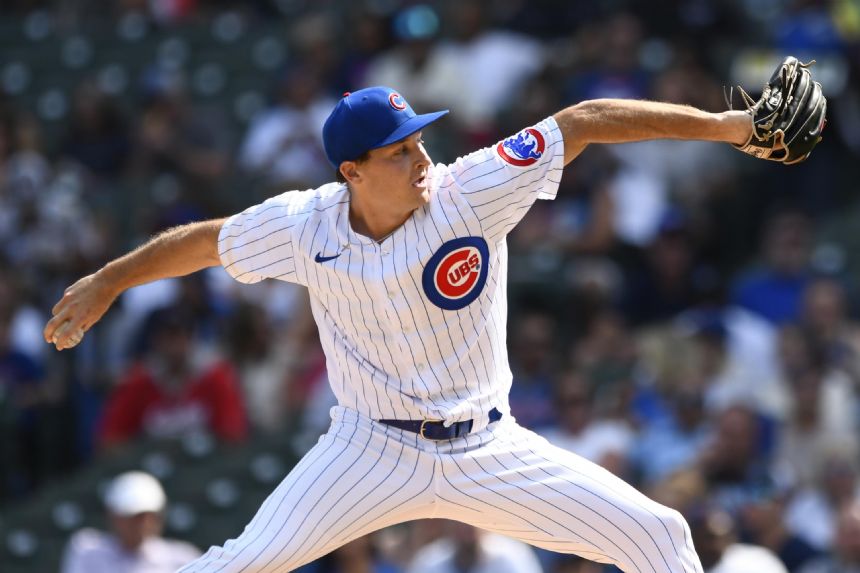 CHICAGO (AP) - Charlie Blackmon hit a tiebreaking triple and scored in a two-run ninth, and the Colorado Rockies earned a rare road win by beating the Chicago Cubs 3-1 on Saturday.

Blackmon drove in pinch runner Garrett Hampson with a triple to the right-field corner against Adbert Alzolay (0-1) after C.J. Cron walked with one out. He scored on a single by Elias Diaz, making it 3-1, and the Rockies came away with the win despite a dominant outing by Cubs rookie Hayden Wesneski in his first major league start.

Jose threw six solid innings, and the Rockies won for just the fifth time time in their past 18 road games. Colorado is a big league-worst 23-48 away from home.

Urena allowed one run and seven hits. Dinelson Lamet and Carlos Estevez (4-4) each worked an inning.

Daniel Bard came on in the ninth for his 31st save in 34 chances. He gave up a one-out single to pinch-hitter Yan Gomes before retiring Zach McKinstry on a line drive and Ian Happ on a groundout.

The Cubs had won four straight and were looking to put themselves in position for their second straight sweep after taking three at the NL East-leading New York Mets.

Wesneski tossed seven innings, allowing one run and three hits. The 24-year-old right-hander struck out seven and did not walk a batter in his third big-league appearance.

Alzolay struck out all three in the eighth before running into trouble in the ninth. The right-hander had been sidelined all season because of a strained right shoulder.

The Cubs reinstated Alzolay from the 60-day injured list and placed outfielder Seiya Suzuki on the paternity list.

Rockies: Manager Bud Black said INF/OF Kris Bryant (plantar fasciitis in left foot) is "getting more confidence" each day. Bryant - out since July 31 - started running Friday and has been hitting in the cage and working out. "The progress has been pretty good the last week or so," Black said.

Cubs: An MRI on SS Nico Hoerner (mild to moderate triceps strain) showed more damage than anticipated, though the Cubs have not ruled him out for the remainder of the season, manager David Ross said. "He wants to get back," Ross said. "He's pretty disappointed with the news and information, but I don't think he has anything left to prove to us this year." Hoerner had the MRI on Thursday. He has not played since Sept. 11. ... LHP Steven Brault (strained left shoulder strain) is likely headed for a rehab assignment with Triple-A Iowa after his most recent bullpen session went well. ... 2B Nick Madrigal (strained right groin) is progressing with agility and strength work.

Rookie RHP Javier Assad (1-1, 2.53 ERA) opposes RHP Ryan Feltner (2-8, 6.12) as the Cubs close out their series against the Rockies. Assad went six innings Monday in beating the New York Mets for his first career win. Feltner is 0-5 with a 6.28 ERA in six starts since beating St. Louis on Aug. 9.