Blue Jays' Alejandro Kirk a hard-hitting 'pain in the neck' 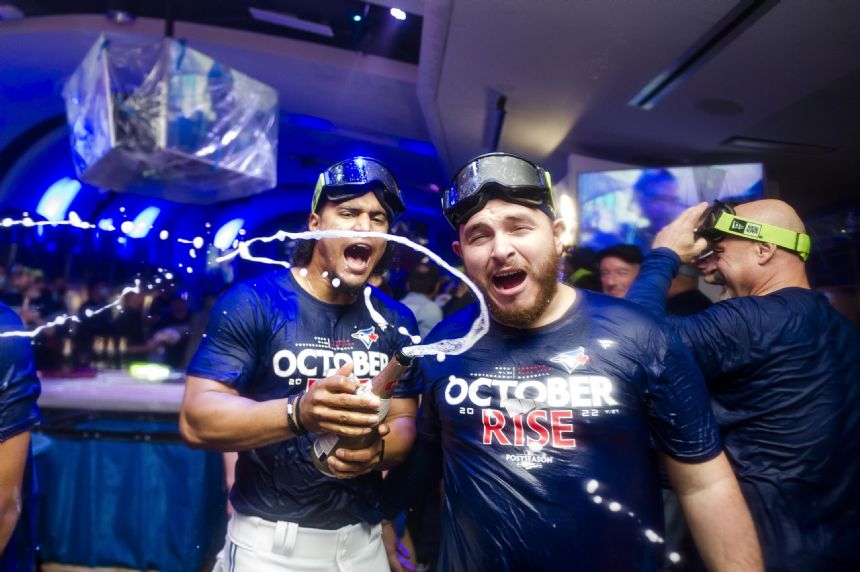 TORONTO (AP) - When Yankees manager Aaron Boone calls Blue Jays catcher Alejandro Kirk "a pain in the neck," he means it as a mark of respect.

The numbers in Kirk's bio - 5-foot-8, 245 pounds - are hardly intimidating, but the ones in his statline sure are. Heading into the final days of the regular season, the 23-year-old is hitting .289 with 14 home runs and a .796 OPS. He's among the best contact hitters in the game, striking out in under 11% of his plate appearances, third lowest among qualified hitters.

"He's a great hitter," Boone said. "He's become entrenched in their four hole for obviously a really good offense. Ever since he's come up, hitting was his calling card. We heard about it. He's always kind of been a pain in the neck. He's just a tough out, a quality at-bat and frankly, one of the really good hitters in the league."

That's high praise for a once unheralded player acquired from the Mexican League for $30,000 in 2016.

Baseball America once described Kirk's appearance as "like a shorter Pablo Sandoval," a player who was also once a minor league catcher before going onto stardom with the San Francisco Giants. Turns out, Kirk can hit something like "Kung Fu Panda," too. He's also done something Sandoval couldn't - prove to be a worthy catcher at the big league level.

Now, Kirk is a regular behind the dish for a postseason contender, and his bat is so potent that he's starting at designated hitter on days he isn't catching.

"His command of the strike zone and his bat-to-ball skills, especially in an extra-inning game where a hit wins it, is very, very valuable to have," interim Blue Jays manager John Schneider said.

"He seems to be able to really slow things down," Atkins said. "You can see it with runners in scoring position, his controlling the running game, his blocking. You can see it in his at-bats, where there's never any panic. He seems to have the same approach regardless of the situation."

In an interview translated by Blue Jays interpreter Hector Lebron, Kirk said that unflappable nature has been part of his game for a long time.

"I've always been like that since I was growing up, especially my at-bats," Kirk said. "I'm not trying to be too aggressive. Always trying to look for a pitch, trying to stay calm all the time."

Kirk's passion for baseball was passed down from his father, Juan Manuel, who coached his son's youth team. Kirk's two brothers were always playing, too, and Alejandro got into catching by following the lead of the older of the pair.

"We were born and raised, pretty much, on the baseball field, through my father," Kirk said. "That's the way everything started for me in baseball."

But it's not just his offensive game that has drawn rave reviews. After working extensively with 2021 Cy Young winner Robbie Ray when Ray pitched for the Blue Jays last season, Kirk has been paired with Blue Jays right-hander Alek Manoah in all but one of Manoah's appearances this season. Kirk also caught a miked-up Manoah in a three punch-out performance at the All-Star game in July.

"It was a great moment for both of us," Kirk said.

Manoah and Kirk met at Toronto's alternate training site during the pandemic-shortened 2020 season, where intrasquad games were common.

"Facing him was terrible," Manoah recalled. "He just hit everything. Didn't know what to throw him."

When he didn't have to face Kirk, Manoah threw to him instead, and a bond formed between the quiet catcher and the gregarious pitcher.

"We have a lot of similarities," said Manoah, whose roots are Cuban. "We both come from Hispanic backgrounds, have some of the same traditions. He works really hard and I respect what he does. I love pitching to him."

Kirk's unusual build - something held against him by some scouts when he was an amateur - has even have become an asset defensively. He ranks among the best catchers in baseball at framing low pitches, something that Schneider says has been critical to Kirk's success working with Manoah.

"They're very much in tune with what (Manoah's) stuff does," Schneider said. "The way Alek's ball moves and what Kirky can do with his glove matches up great."