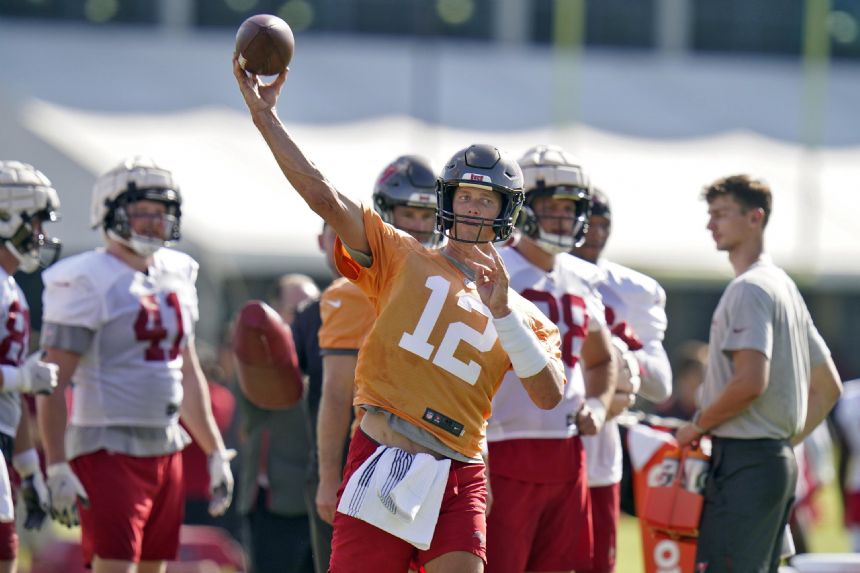 TAMPA, Fla. (AP) - Todd Bowles chuckled when he was asked if the Tampa Bay Buccaneers are planning anything special for Tom Brady's birthday.

The seven-time Super Bowl champion turns 45 on Wednesday. His coach wouldn't say if the quarterback would get a day off from practice.

"As long as we keep him upright and he's walking, that's a great birthday," Bowles said Monday. "What do you give the guy who has everything, right?"

Brady spoke to reporters for the first time since the start of training camp, keeping most of his answers brief during a seven-minute session in which he discussed - among other things - the knee injury that will sideline center Ryan Jensen much of the season and his remembrance of basketball Hall of Famer Bill Russell.

Second-year pro Robert Hainsey is competing with another young lineman, Nick Leverett, to replace Jensen, who was a first-time Pro Bowl selection in 2021.

Brady noted "everyone's heartbroken" about Jensen, who's expected to miss "significant time" after being injured during a non-contact drill last week. He added Hainsey, like every other player in camp, is striving to get better each day.

"He worked hard last year, really gained the trust of a lot of people, and he's got to go earn it like all of us," Brady said of the 2021 third-round draft pick out of Notre Dame. "It's not what you did, how hard you worked in the offseason. It's how good of a football player are you. It's to be determined for all of us."

Brady spoke in a news conference setting in Tampa for only the second time since losing to the Los Angeles Rams in the divisional round of last season's playoffs, then subsequently retiring for a little more than a month.

He shrugged off a question about whether his decision to unretire in March was influenced by the way last season ended.

The quarterback briefly reflected on the addition of offensive playmakers Julio Jones, Russell Gage and Kyle Rudolph this offseason, but played down the role he played in recruiting them to bolster an already impressive group of pass-catchers headed by receivers Mike Evans and Chris Godwin.

Last week, general manager Jason Licht talked about the advantage Brady provides the Bucs in free agency, concluding he will never "apologize for using him to help me" upgrade the roster.

"Naturally I'm an older player and I've been very fortunate to know a lot of guys. But guys choose this team because of the team, not me," Brady said.

"It's never about one person. ... It's the ultimate team sport," the quarterback added. "I love playing with players that are professional, players that want to work hard, and players that put the team first."

Many people consider Russell, the former Boston Celtics star who won 11 NBA championships in 13 seasons, the greatest winner in U.S. team sports history. He died Sunday at the age of 88.

"I knew him pretty well. I had a lot of time up there in Boston and got to know him. He was a very impactful figure, said Brady, who before joining the Bucs won six Super Bowls over 20 seasons with the New England Patriots.

"My second year of training camp, he came and spoke to our team. Really an imposing figure," Brady recalled. "He had just a great presence about him. And, obviously what he overcame in his career was pretty unbelievable. (His passing) was a sad day."