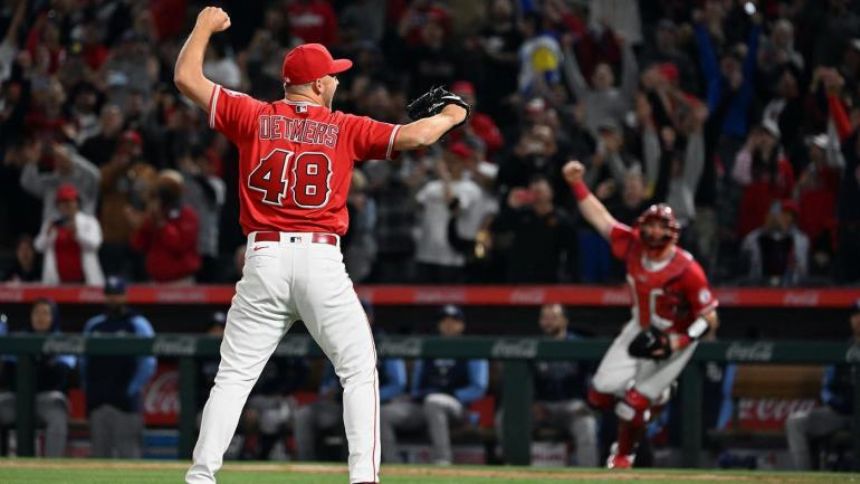 Nice to meet you, Reid Detmers, and welcome to the history books! The Angels' 22-year-old rookie, making just his 11th career MLB start, threw a no-hitter last night against the Rays in Los Angeles' 12-0 win.

Detmers was the Angels' first-round pick (10th overall) in 2020 and , but had a 6.33 career ERA entering last night's game. He had also never pitched more than six innings in a game. That's what makes baseball so great, though: Magical performances can come from anywhere, at any time.

... AND ALSO A GOOD MORNING TO THE MIAMI HEAT AND THE PHOENIX SUNS

On Sunday night, everything came up 76ers.'Joel Embiid was back in full force,'James Harden'had turned back the clock, the supporting cast was filling its role perfectly and Philadelphia had won two straight.

The Heat quieted all of that in emphatic fashion last night with a'dominant 120-85 win.

What was most shocking -- and what the box score doesn't show -- was the completely different energy levels on display.' Philadelphia was sloppy and sluggish and showed little fight when it fell behind. Mind you, this was Game 5 of a series tied 2-2.'The winner of this game, historically, wins the series 82 percent of the time. Philadelphia treated it like a regular-season game with nothing on the line. But credit the Heat: They were terrific on both ends and they're now one win from the Eastern Conference Finals.

The Western Conference No. 1 seed was plenty impressive, too: The Suns'throttled the Mavericks, 110-80, to also take a 3-2 series lead.

Quite simply, the Suns looked like themselves again, notes our NBA expert Jasmyn Wimbish.

GOLFERS TRYING TO PLAY IN THE LIV GOLF LEAGUE...

PGA Tour commissioner Jay Monahan is putting his foot down.'. It's a surprising turn of events, writes our golf expert Kyle Porter.

, including Phil Mickelson, Sergio Garcia and Lee Westwood, were . It's unclear what they -- or LIV Golf -- will do next. Here are more details:

LIV Golf, of course, is none too happy, and this won't be the last we hear about .

... AND ALSO NOT SUCH A GOOD MORNING FOR JA MORANT AND THE MEMPHIS GRIZZLIES

We have more news on Ja Morant's injury, and it's not good. The Grizzlies superstar is . Morant against the Warriors and did not play in Game 4 -- both Memphis losses.

Down 3-1 in the series, the Grizzlies could very well see their season end tonight. That it could end without Morant is a bummer.

Last night, we had four Game 5s in the NHL playoffs with all four series knotted at two games apiece. Just how important were these games? The winner of Game 5 in a series tied 2-2 goes on to win the series 79 percent of the time, which means the following teams are in good shape:

It was also an important night off the ice with the NHL draft lottery. The Canadiens -- who had the top odds for the first pick -- did indeed get the first selection. It's the sixth time Montreal, which will host the draft in July, has gotten the top pick.

You can see full results of the draft lottery'here.

Basketball Hall-of-Famer'Bob Lanier . Selected first overall in the 1970 NBA Draft by the Pistons, Lanier spent most of his career in Detroit before finishing with the Bucks.

Lanier spent much of his post-playing life helping grow the game globally. NBA commissioner Adam Silver called Lanier "a close friend who I will miss dearly, as will so many of his colleagues across the NBA who were inspired by his generosity."

The NFL Draft is a big deal for the incoming rookies, sure, but it's also a big deal for NFL veterans.'So, which veterans should be encouraged by how their teams drafted? Which might not be so happy?

Our Jeff Kerr', and I wholeheartedly agree with his first selection for players who benefitted most:

Jackson was one of three quarterbacks on the "benefitted" side, but it wasn't good news for every signal-caller. Three quarterbacks were on the list of veterans who were "hurt" by their team's draft. You can check out the entire list'.