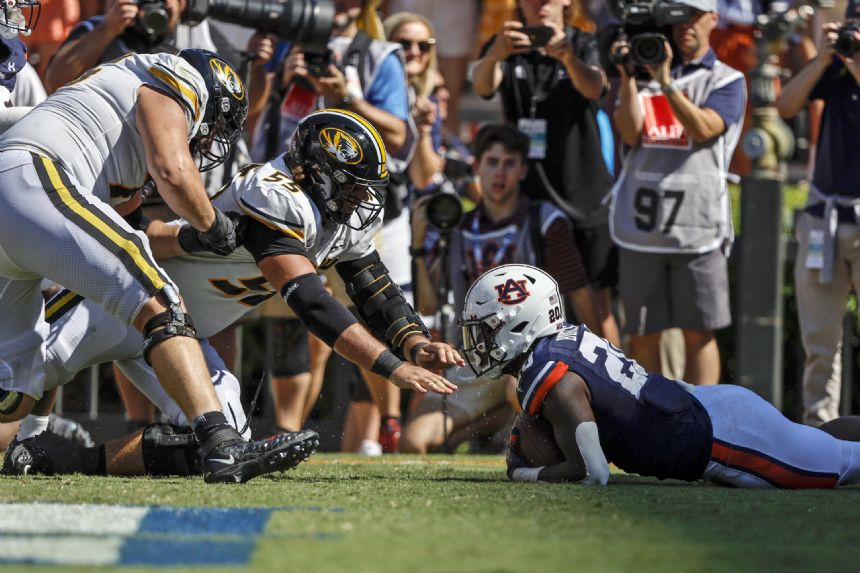 AUBURN, Ala. (AP) - Cayden Bridges recovered a fumble in the end zone to give Auburn a 17-14 overtime victory over Missouri in an SEC opener on Saturday afternoon.

Missouri (2-2) running back Nathaniel Peat dropped the football before a potential game-winning touchdown, and Bridges landed on it to seal the victory for Auburn (3-1).

Auburn kicker Anders Carlson hit a 39-yard field goal to give the hosts the lead in overtime. Missouri jumped offsides on Carlson's try from 44 yards out, which was missed.

Carlson's overtime field goal was the only scoring after halftime. The two teams combined for 12 consecutive punts in the second half before Auburn running back Tank Bigsby was stopped on fourth-and-1 from the Missouri 30-yard line with 1:37 remaining.

Missouri kicker Harrison Mevis missed a 26-yard field goal attempt at the end of regulation. The visiting Tigers played for the final field goal following a 39-yard pass from Brady Cook to Dominic Lovett in the final minute of the fourth quarter.

Missouri: The pressure will only increase on Missouri head coach Eliah Drinkwitz, who is now 13-14 in his tenure with the Tigers. Missouri's offense struggled after halftime, going three-and-out on five of its seven possessions.

Auburn: The wild finish will help head coach Bryan Harsin, whose job security was in question after a 29-point home loss to Penn State last weekend. Still, Auburn finished with only 217 yards of total offense and averaged just 3.3 yards per snap.