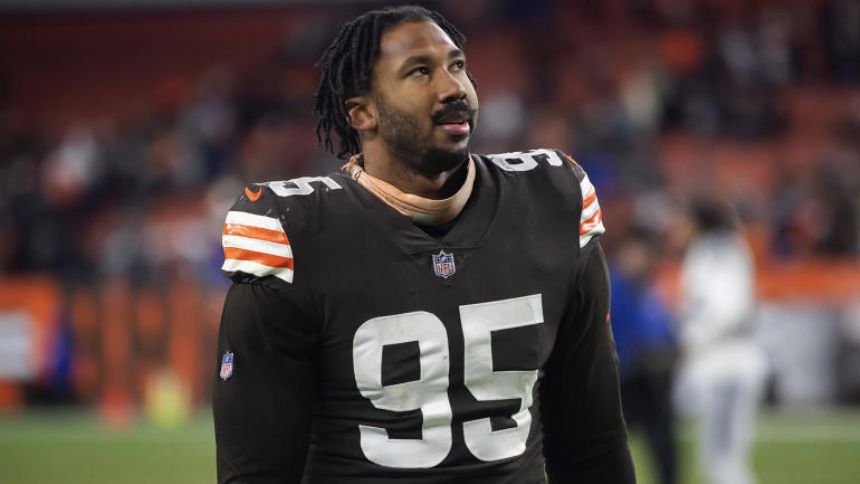 Typically, a Browns-Steelers matchup gives fans an opportunity to watch two of the league's best pass rushers in Myles Garrett and T.J. Watt. Members of the 2017 Draft class, Garrett and Watt have combined for seven Pro Bowl berths while collecting 134.5 sacks during their time with the Browns and Steelers, collectively.'

With Watt already on injured reserve with a pec injury, Garrett's status for Thursday night's game between the two teams is now in question after he missed practice with a neck injury. Garrett, who has half of the Browns' six sacks this season, was not listed on Monday's injury report.'

Along with Garrett, defensive end Jadeveon Clowney'has already been ruled out of Thursday's game with an ankle injury. Cleveland is also dealing with an injury to starting left guard'Joel Bitonio, who also missed practice Tuesday with a knee injury. Additionally, the Browns have placed linebacker Chase Winovich (hamstring) and tight end'Jesse James (biceps) on injured reserve.'

Garrett's absence would be a big loss for a defense that struggled during the first two weeks of the regular season. The Browns are currently 26th in the NFL in points allowed, 25th in passing yards allowed 22nd on third downs and 22nd in the red zone. The unit had a complete meltdown in allowing two touchdowns in the final 90 seconds of last Sunday's home loss to the Jets.'

Like the Browns, the Steeles are also hoping to avenge a disappointing home loss in Week 2. While their defense largely played well, Pittsburgh's offense, led by new starting quarterback Mitchell Trubisky, scored just 14 points while being curiously conservative in a three-point loss to the Patriots.'

Cleveland is a five-point favorite entering Thursday's game with the over/under set at 38.5 points, according to Caesars Sportsbook. Both teams are 1-1 straight up and 0-2 against the spread through two games.'