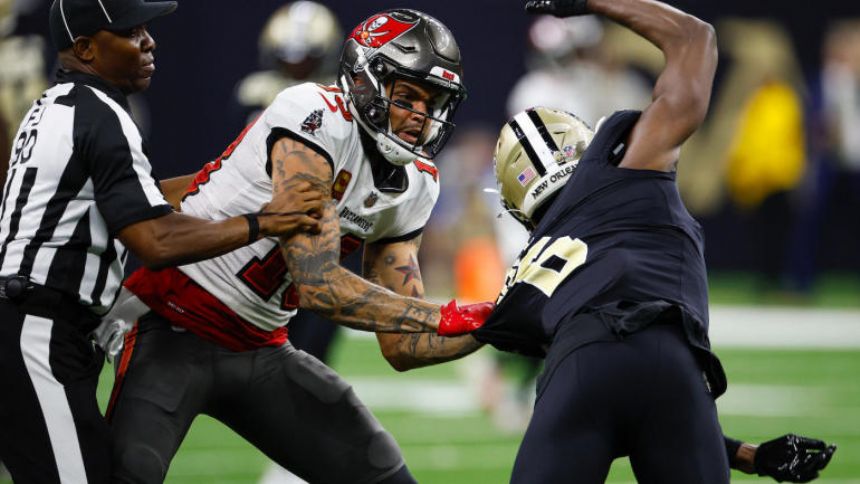 Mike Evans' day ended a bit earlier than expected in Week 2 after the Buccaneers wideout was ejected from Sunday's win over the Saints due to with New Orleans cornerback'Marshon Lattimore, who was also booted from the contest. Now,'NFL Network reports that league officials are reviewing Evans' actions in the altercation for a possible suspension.'

The incident occurred in the fourth quarter of this NFC South matchup in New Orleans with the game still knotted a three. Tom Brady threw an incomplete pass to Scotty Miller on a third-and-5 situation, and Lattimore seemed to begin jawing at the veteran quarterback. Leonard Fournette and Lattimore began shoving one another and Evans came over the top and ran right into Lattimore, which turned this into a full-on brawl.'

It's worth noting that Evans is not a first-time offender in this type of situation. Back in 2017, he received a one-game suspension for a hit he made on Lattimore on the Tampa Bay sideline, a move he'd later characterize as "childish." With that in mind, however, the league could come down a bit more harshly on the receiver as this would be a second offense.'

"Naw, naw, naw, naw," Evans told reporters Sunday when asked if he was concerned about a possible suspension. "That was terrible -- 2017 I didn't even get ejected and that was really a cheap shot. This wasn't. He punched my teammate in the face and I just pushed him to the ground."

If Evans is suspended, it's a less than ideal turn of events for the Buccaneers. Despite being 2-0 to start the year, they are particularly banged up at the receiver position as Chris Godwin and Julio Jones both missed Week 2 due to injury. If they are unable to go in Week 3 against the Green Bay Packers and Evans is suspended, Tom Brady's offense will be drastically undermanned.'