By committing to Eastern Michigan, Emoni Bates could be repeating mistakes that stunted once-promising career 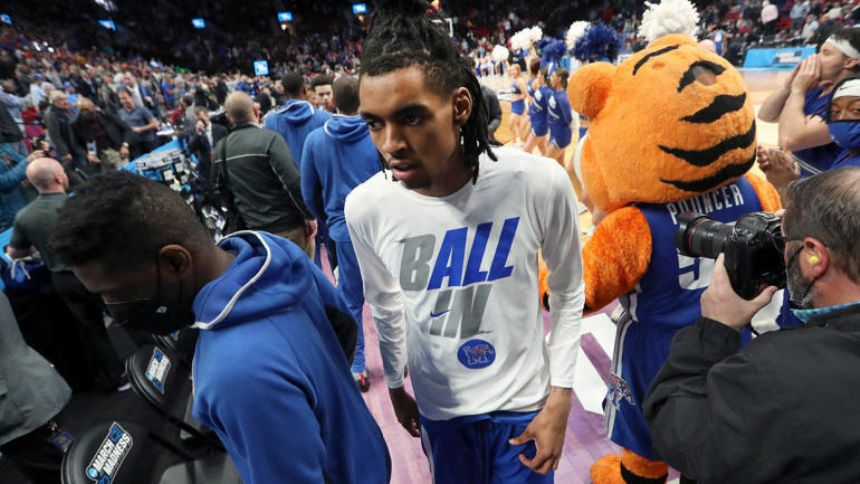 In October 2019, at the age of 15, Emoni Bates was on the cover of Sports Illustrated.

Those were the words beside Bates' face. Underneath his chin, it read "Magic, Michael, LeBron ... And the 15-year-old Who's Next in Line." In the second paragraph of the accompanying story, written by Michael Rosenberg, a college assistant called Bates "the best player I've ever seen."

In June 2022, at the age of 18, Emoni Bates to Eastern Michigan, where he'll try to bounce back from arguably the most disappointing season any college player just had. So that should tell you all you need to know about how the past three years have unfolded for the one-time prodigy who has turned into a player basically no relevant program wanted to bring to campus this summer.

Less than a year ago, Bates was ranked as the No. 1 player in the Class of 2022. Then, he reclassified to the Class of 2021 -- where he was still ranked in the top five alongside Chet Holmgren, Paolo Banchero and Shaedon Sharpe -- and was subsequently wooed to Memphis by Penny Hardaway. Less than a year later, the same Penny Hardaway reportedly told Emoni Bates his one season at Memphis would be his only season at Memphis. And though Wednesday's commitment to his hometown school has been portrayed by some as a feel-good story, truth is, it's only a story because Bates' options dwindled in recent weeks.

So Bates -- who said earlier this offseason that his "main goal" was to go to a place where he could win -- announced a commitment to Eastern Michigan, which is actually a place that hasn't had a winning record since 2018. The Eagles went 10-21 last season and finished 316th at KenPom.com. They haven't made the NCAA Tournament since 1998. They're currently 262nd in BartTorvik.com's preseason rankings.

Good luck on that winning.

That is not meant as a shot at Eastern Michigan. I only type these things to illustrate just how off the rails Bates' career has gone since that Sports Illustrated cover. It should trigger a real look-in-the-mirror moment for Bates and everybody who has played a role in his fall from there to here -- most notably his father, Elgin Bates, who is among the reasons most relevant programs stayed away this summer.

I'm sure Elgin Bates loves his son. I'm certain being the father of "the next big thing" is challenging. (Heck, being a father, period, is challenging.) But with those disclaimers out of the way, it's impossible to refute the idea that just about every decision Elgin Bates has made for Emoni Bates over the past three years, and his desire to be too involved at every turn, has contributed to this downfall.'

Pulling him out of his high school and building a prep school around him was a mistake. Building a grassroots program around him was a mistake. I'm sure it was profitable on some level -- but it was still a mistake on most levels because it led to Bates spending multiple years in high school with subpar coaching while surrounded by grossly inferior talent. There was nobody to push him on the court or off. So his development just ... stopped. And rather than recognize this and adjust, Elgin Bates, not long after name, image and likeness rights became a reality for college players, decided to have his 17-year-old son reclassify, enter college early and cash-in.

It was clear almost immediately that Emoni Bates was not ready for college basketball. He began the season as a starter, but saw his minutes get slashed after he combined to go 5 of 23 from the field in consecutive games against Ole Miss, Murray State and Alabama. He only played 15 minutes against the Crimson Tide and was benched for nearly the entire second half. In a related note, Memphis won that game to snap a four-game losing streak, at which point it became clear the Tigers were better without him.

A little more than a month later, Bates left the team and returned home to Michigan because of what was described as a "back issue." Worth noting: he played 22 minutes days before he developed a "back issue," and literally nobody ever mentioned that Bates was dealing with a "back issue" until after'he left the team with a "back issue." Also worth noting: I can't think of many examples of players developing back issues (or any other kind of issues) and flying home to see a doctor rather than just, you know, seeing the team doctor or some local doctors. Regardless, that's what Bates did before rejoining Memphis more than a month later under, let's just say, weird circumstances. He played three minutes against Boise State in the NCAA Tournament and 12 more against Gonzaga. Then he entered the transfer portal. And now he's headed to Eastern Michigan, where he will once again be surrounded by grossly inferior talent.

I hope it works out.

But I have for a while now believed that the best thing for Emoni Bates would have been to join the G-League Ignite or enroll at a school with other NBA prospects. He needs a strong coach who could convince Elgin Bates to detach, stay away and let his son be pushed and coached without interruption or input. Problem is, most high-major coaches have heard stories about Elgin Bates causing scenes inside FedExForum at Memphis home games and generally being a pain in the ass for Hardaway, so they largely didn't want to get involved. That left Eastern Michigan as one of the few options available. But going back home to be a part of a program where everything will revolve completely around him feels a lot like the mistakes that were made when a prep school and grassroots program were built to revolve completely around him.

Because, if I'm not wrong, and Bates does nothing at Eastern Michigan to rejuvenate his reputation and then exits his sophomore season as something less than a guaranteed first-round pick in the 2023 NBA Draft, this will go down as one of the greatest falls from relevance in the history of the sport. That's not fun for anybody. So I'll be rooting for Emoni Bates to be awesome and the MAC Player of the Year. But the fact that it's even possible to root for such a thing highlights just how badly things have gone since Sports Illustrated put him on the cover in October 2019, back when he was supposed to be the next Kevin Durant and it was was literally impossible to envision ever writing about how Emoni Bates would need a bounce-back sophomore season to maybe be the Mid-American Conference Player of the Year.