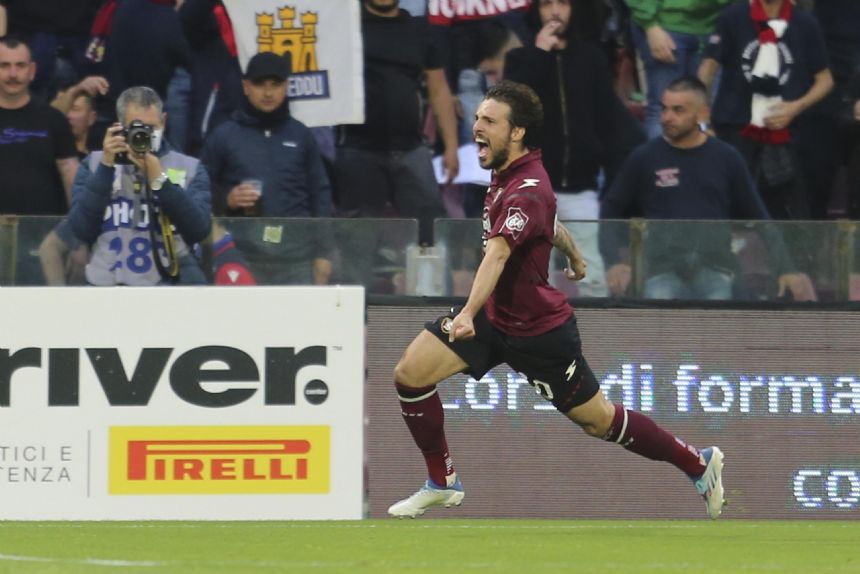 MILAN (AP) - Cagliari defender Giorgio Altare may have just saved his side from relegation with his first goal in Serie A.

Altare headed in a corner in the ninth minute of stoppage time to salvage a 1-1 draw at fellow struggler Salernitana on Sunday in a match that was full of late drama.

Salernitana had seemed to be heading for its fifth win in its past six matches - and against a direct rival for Serie A survival - following Simone Verdi's second-half penalty.

Salernitana, which was bottom of the league for nearly the entire season, remained a point clear of Cagliari and the bottom three. There are two rounds remaining.

The late goal also saved Venezia for another week at least. Venezia was five points behind Salernitana after beating Bologna 4-3 to end a run of 10 straight defeats and record its first win since February.

Attention now turns back to the top of the table, with AC Milan looking to move above league leader Inter Milan with a result at Hellas Verona.

The match in Salerno was vital for both teams. Cagliari had replaced Salernitana in the bottom three after Davide Nicola's side beat Venezia 2-1 on Thursday.

Salernitana eventually broke the deadlock in the 68th minute when Verdi struck a powerful penalty into the bottom left corner after Cagliari defender Matteo Lovato had tripped Grigoris Kastanos.

Cagliari thought it had been given a great chance to equalize deep in stoppage time when it was awarded a penalty after Salernitana goalkeeper Luigi Sepe tripped Daniele Baselli. After reviewing the incident on the pitchside monitor, referee Marco Di Bello revoked his decision after adjudging there had been a foul on Sepe just before.

However, Cagliari did level with a bullet header from Altare that was too powerful for Sepe to keep out.

Atalanta boosted its chances of qualifying for Europe with a 3-1 win at lowly Spezia, which was still not safe from relegation.

Berat Djimsiti headed in his first Serie A goal of the season in the 73rd minute to restore Atalanta's lead after Daniele Verde had canceled out Luis Muriel's opener in the first half.

Muriel also helped seal the match as he threaded the ball through for Mario Pasalic three minutes from time.