Can Andrei Vasilevskiy save the Lightning? Plus other best bets for Monday 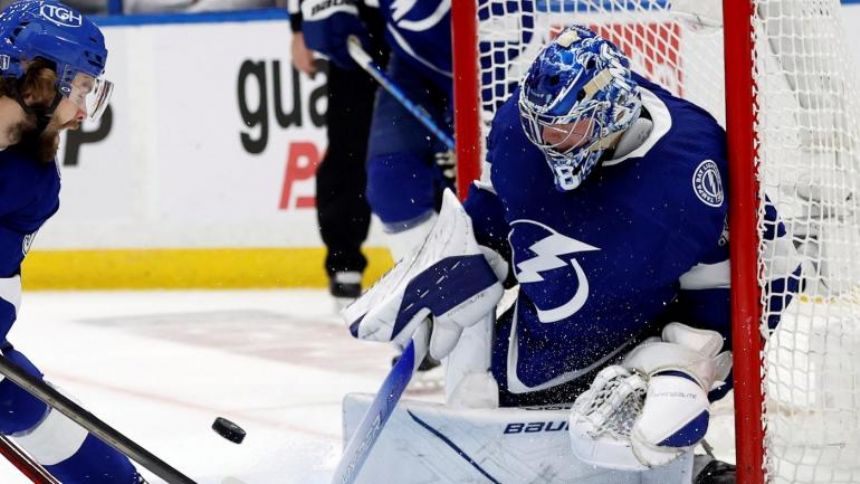 As of now, the preferred destinations if Kyrie leaves appear to be the Lakers, Clippers, or across the East River with the Knicks.

Wherever he ends up, I'm sure everything will go smoothly, and nobody will regret their decision. Just like you won't regret reading any of these other stories from a lovely Monday in June.

By the way, Kevin Durant, if you're reading this (and why wouldn't you be), it's time to force your way to Chicago, my dude.

I've told you before that my NHL picks in this newsletter are based on numbers and what they tell me. Well, the numbers don't like much of anything tonight.

No, tonight's pick is about the vibes. Colorado shellacked the Lightning 7-0 on Saturday night (if only I could think of a geological event that accurately described the sudden arrival of an incredible number of goals scored by the hockey team from Colorado, but I can't). That result was surprising, and it could be skewing the line a little too much in Colorado's favor tonight.

But more than anything, this is Tampa's last stand. We're talking about a two-time champion here, and this is as must-win as must-win gets for the Lightning. What gives me additional confidence is that, 7-0 stomping aside, Tampa's Andrei Vasilevskiy is the best goalie in this series, and goalies can win hockey games on their own. Vasilevskiy has been much better at home in the playoffs, going 7-1 with a save percentage of 94.7% and a goals-against average of 1.69. On the road, he's 5-6 with a save percentage of 89.6% and a GAA of 3.29.

The Lightning need their goalie tonight. We need him too.

Here's what SportsLine is saying about the game:'The SportsLine Projection Model doesn't like anything here tonight, but two SportsLine experts are in agreement on a play. That's usually a good sign.

The Pick: Under 8 (-110) --'Both these teams look likely to make the playoffs in 2022, but their offenses occupy different worlds at the moment. Braves hitters have lit it up over the last few weeks, propelling Atlanta back into the NL East race. Meanwhile, the Giants offense has struggled lately, but the team's pitching has kept it afloat in a very difficult NL West.

I don't expect either offense to have much fun tonight. While they look different and throw with different arms, there are a lot of similarities between tonight's starters, Logan Webb and Max Fried. Neither built their career on strikeouts. Instead, they pound the zone, avoid walks and force groundballs at an astounding rate. It's hard to score a lot of runs when you're pounding the ball into the dirt repeatedly, so we shouldn't expect many big innings tonight.

The Pick: Padres (-165) --'San Diego's Manny Machado is likely to miss tonight's game (and probably more) after spraining his ankle Sunday, and his absence seems to be skewing the line a little too much. While Machado is a key part of what the Padres do, he's not the only reason San Diego sits in second place in the NL West. With or without him, the Padres remain much better than the Diamondbacks.'

Yu Darvish's strikeout rate of 20.5% is well below his career rate of 29.3%, but he's making up for it by walking only 5% of opponents, which is well below his 8.1% career rate. Darvish has also avoided hard contact. While Arizona starter Zach Davies has been respectable this year (his numbers aren't too far off Darvish's), he allows more contact, and he's backed by the far weaker bullpen in this matchup.

?? SportsLine Pick of the Day:'Prop guru Alex Selesnick has shared all his favorite MLB props for Monday night here.

I have a feeling the ball could be carrying in Chicago tonight, so let's bet on some dingers.