Can Cooper Rush keep the Cowboys afloat without Dak Prescott? Let's look at the tape 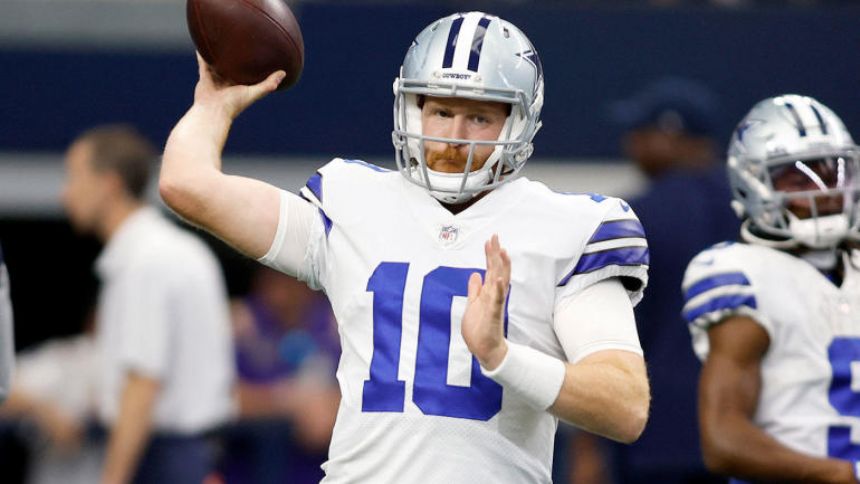 Over the last two seasons, the Dallas Cowboys have counted on backup quarterback Cooper Rush to make two starts in place of an injured Dak Prescott. In games against the Minnesota Vikings and Cincinnati Bengals, the Cowboys have gone 2-0, with Rush leading a game-winning drive in the fourth quarter of each contest.'

On a surface level, Rush appears to have performed quite well. He's completed 43 of 71 passes (60.6%) for 560 yards (7.9 per attempt), three touchdowns, and one interception, good for a 95.5 passer rating. Throw in the perfect record, and that's just about all you can ask for from a backup quarterback.'

Mike McCarthy, Kellen Moore'and Co. have done a pretty strong job of scheming players open in Rush's starts, and he in turn has done the work of delivering the ball on time and on target on plenty of those occasions. Some of these schemed throws may seem easy, but not even every starter -- let alone backup -- makes them all the time.'

Rush has also on occasion made things happen on his own. This past Sunday against the Bengals, he flashed particularly good chemistry with Noah Brown, who has moved up to No. 2 on the depth chart early this season with Michael Gallup still sidelined due to last season's ACL injury, and Amari Cooper and Cedrick Wilson having moved on to new teams via trade and free agency. It's likely that their scout team chemistry carried over to the real game, as was presumably the case last year when Rush made probably his best throw of his career to date on a strike to Wilson over the middle of the field.'

Of course, Rush's work isn't done. The Cowboys need him to start at least a few more games in relief of Prescott, and a deeper look at the numbers as well as a dive into the film leaves one unconvinced that Dallas can keep stacking wins unless Rush's down-to-down performance improves.'

Dallas has scored exactly 20 points in each of Rush's two starts, for example, and that is typically not good enough to win in 2022 -- even when you have a good defense, like the Cowboys have over these last two seasons. Dallas was the NFL's No. 7 scoring defense a year ago, and still allowed 21.1 points per game. The average team scored 22.9 per contest. If you only manage 20, more often than not, you are going to lose. (The Cowboys scored 30.2 points per game in Prescott's starts this year and last, including the season-opening stinker against Tampa Bay this year.) It's a testament to Dan Quinn's defense that the Cowboys have been able to come away with two victories in Rush's starts by holding their opponents to just 16 (Vikings) and 17 (Bengals) points.'

The Cowboys' 1.90 points per drive average in Rush's starts would have seen the team drop from the league's No. 1 scoring offense a year ago to No. 12, and the share of the team's drives that ended in a punt would have dropped from 35% under Prescott (1% better than league average, 13th in the NFL), to 43% under Rush (30th in the NFL), according to TruMedia. Rush has also been off-target on 20% of his throws, per TruMedia's tracking. That would be the worst mark among all quarterbacks if Rush had thrown enough passes to qualify, while Prescott's 10% mark ranks 11th-best out of 32 such passers. Rush has also taken sacks at a higher rate than Prescott (19% of pressured dropbacks vs. 15%) despite being pressured less often (25% of dropbacks vs. 31%).'

Beyond that, there's reason to look upon his passing numbers with a heavy dose of skepticism. For example, 21.3% of his passing yardage has come on two plays: the 73-yard touchdown pass to Wilson last season, and this "pass" to Tony Pollard against the Bengals on Sunday.'

That's a run play where the ball just happened to be flipped laterally rather than backward, and where the receiver did all of the work in making the big gain.'

Rush has also been the beneficiary of several incredibly lucky bounces. A key pass on his game-winning drive on Sunday was deflected as he threw it, only it managed to travel about 15 yards downfield and fall into the hands of Brown. He nearly had a tight end screen intended for Dalton Schultz last season get intercepted, but the ball instead bounced off of three players and resulted in a 7-yard gain. And the biggest play of his game-winning drive a year ago saw Amari Cooper make a ridiculous circus catch on a horrifically under-thrown deep ball.'

Then there's the turnover issue. Rush has officially lost one fumble and thrown just one interception in his two starts, but he has tried to give the ball away several times more. He was lucky not to be pick-sixed twice against the Bengals on Sunday, and he could have been intercepted as many as four or five times against Minnesota last season. This level of interception luck is not particularly sustainable, especially considering his track record of off-target throws.

Given this level of performance, the Cowboys are frankly very lucky to be 2-0 in Rush's starts. He's expected to be at the controls for at least two or three more games, and the team will need better from him in order to continue these winning ways.'

The Cowboys are fortunate that the next two games are against the New York Giants and Washington Commanders, two teams that do not sport imposing offenses. They may be able to win low-scoring contests against those squads just as they did against the Vikings and Bengals -- especially if the defense continues to play as well as it has in those game. But if Rush has to continue starting against the likes of the Rams, Eagles, and even Lions, coming away with just 20 points or so seems unlikely to cut it.'