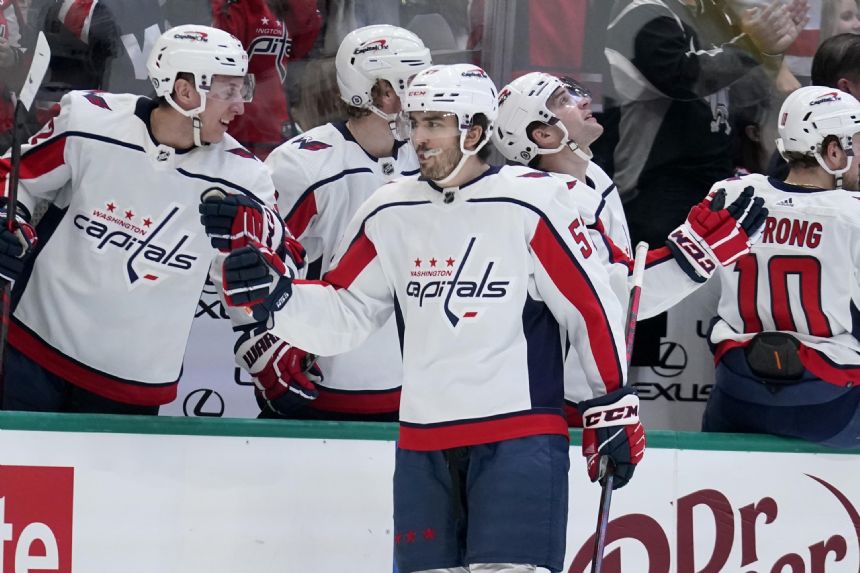 DALLAS (AP) - Nicklas Backstrom had a goal and two assists and Vitek Vanecek had 30 saves for his second shutout of the season as the Washington Capitals beat former teammate Braden Holtby and the Dallas Stars 5-0 on Friday night.

Holtby allowed all five goals and stopped 22 shots before being replaced after two periods by Jake Oettinger, who made two saves. It was Holtby's first career game against the Capitals, his former team for the first 10 of his 12 NHL seasons.

The Stars, who retired Hall of Famer Sergei Zubov's number before the game, lost after winning four straight, all on the road. They were shut out for the second time this season, the other coming on Dec. 9.

Backstrom's goal on a wrister from the left circle came with 3:10 left in the second period to complete out the scoring. Limited to 12 games beginning Dec. 15 primarily because of a hip injury, all three of his goals this season plus four assists have come in the last five games.

It appeared Dallas' Joe Pavelski scored only 42 seconds in on ithe team's first shot on goal, but Washington successfully challenged the play for being offside. Soon after, the Caps began target practice on Holtby.

The first two goals were one-timers on power plays, by Wilson from the right circle at 1:29 only 10 seconds into the penalty on Washington's first shot on goal and Carlson from the high slot at 7:54. Van Riemsdyk made it 3-0 at 13:08 from near the blue line just inside the far post past a screened Holtby.

McMichael shot into an open net with 7:57 to play in the second period after Lars Eller skated into the trapezoid and brought Holtby out of his crease for a 4-0 lead.

Capitals: At Pittsburgh on Tuesday.