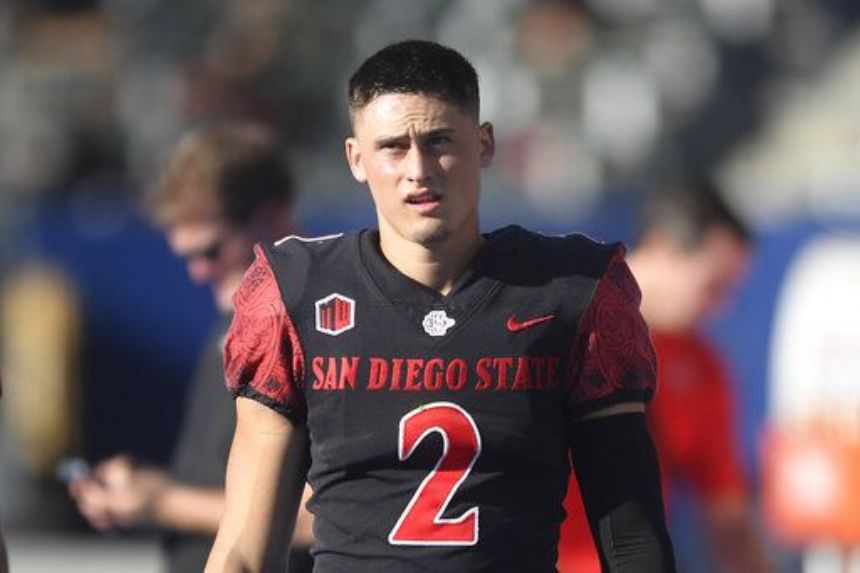 SAN DIEGO (AP) - The No. 19 San Diego State Aztecs have to make one more trip to the Los Angeles suburb of Carson, this time to host the Mountain West Conference championship game Saturday against Utah State in their temporary home at a soccer pitch.

Win and the Aztecs (11-1, 7-1 MWC) will gladly make a final drive up interstates 5/405 this year, because the MWC title includes a berth in the inaugural Jimmy Kimmel LA Bowl at $5 billion SoFi Stadium in Inglewood on Dec. 18.

The Aztecs haven't played in San Diego since 2019. Due to the pandemic affecting the 2020 schedule, the school decided to move up demolition of 70,000-seat SDCCU Stadium earlier than originally planned to help expedite construction of 35,000-seat Aztec Stadium. It will open in time for the 2022 season as the first part of a campus expansion in Mission Valley.

So the Aztecs have made the 232-mile round trip to Dignity Health Sports Park, the 27,000-seat home of the MLS' Los Angeles Galaxy, for home games since last season. Crowds were sparse early this season, due to the drive and late kickoff times, but attendance picked up for last Friday's 27-16 win against Boise State, which kicked off at 9 a.m. PST.

"When you looked up in those stands, it was a much more, I want to say packed crowd, but fan-friendly crowd," coach Brady Hoke said. "From that point that was fun. Our guys have done a great job preparing, knowing that this is how it is. They can't do anything about it but just go out and play the best football we can."

SDSU, which is 6-1 at Carson this year and 9-2 in two seasons, is trying for its first MWC championship since winning consecutive titles in 2015-16 under coach Rocky Long. Utah State (9-3, 6-2) lost to Fresno State in its only championship game appearance, in 2013.

The Aggies are a school-record 6-0 on the road this season and relish their underdog status, particularly after feeling they were snubbed when the all-conference teams were named.

"There are a lot of well-deserving guys that aren't on the list. It's kind of been the environment we've felt like we've been in all season," first-year coach Blake Anderson said. "Nobody expected anything from us when the season started. ... This is a very chip-on-your-shoulder, blue-collar group of dudes and this is something I think they'll welcome. There'll be a chip on their shoulder going into Saturday, which is exactly where I want it to be."

Punter/placekicker Matt Araiza, the MWC Special Teams Player of the Year, remains the Aztecs' most potent threat after repeatedly forcing opponents into bad field position with booming punts. Araiza, a finalist for the Ray Guy Award, leads the FBS in punt average at 51.5 yards and is on pace to break the FBS record of 50.98. The junior from San Diego has an NCAA-record 38 punts that have traveled at least 50 yards, an NCAA-record 18 punts that have gone 60 yards and 36 punts downed inside the 20-yard line. Araiza also handles kickoffs and PATS/field goals.

Utah State junior quarterback Logan Bonner is coming off a big performance in a 35-10 win against New Mexico when he tied the school record with five touchdown passes and threw for 306 yards. He has 3,236 yards and 32 TDs this season, against 10 interceptions. The Aztecs are expected to start Jordon Brookshire, who came off the bench late in the first half to help rally the Aztecs to 24 straight points against BSU. Brookshire passed for 192 yards and one touchdown, and also ran for a score after Lucas Johnson went out with a knee injury.

The Aztecs are aiming for the 22nd conference championship in school history. "I think there's a group of guys who want to have a legacy and part of that legacy is winning championships," Hoke said. "It's something that we talk about every day. When I enter a room, and when coach Long used to enter a room, there were a couple of things you asked the team , and it has always been win, and it's win 22."

Utah State is 5-63 all-time against teams ranked in The Associated Press poll, but has won four of its last 13 meetings against Top 25 teams. The highest-ranked team the Aggies have beaten was No. 18 BYU in 2014. Their last win versus an AP Top 25 team was against No. 21 Boise State in 2015.