Carson Wentz looks back on time with Eagles, what went wrong, fan experience as he sets to face former team 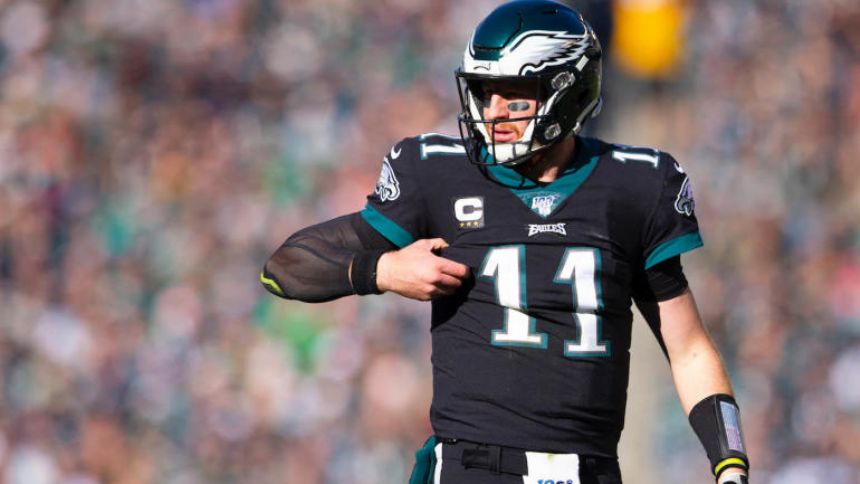 Nearly two years have gone by since Carson Wentz and the Philadelphia Eagles divorced, ending a five-year marriage that had plenty of highs and lows. Though all the success in the early going, numerous injuries, the emergence of Nick Foles, and a disastrous 2020 season led to Wentz asking for a trade out of Philadelphia.'

The road hasn't been easier for Wentz since he left, as he's on his third team in his last three years. Wentz has seemed to have found a home with the Washington Commanders as he sets to face his former team for the first time. He's downplaying the first matchup against the Eagles, yet addressed his time playing for the team he played a significant role in getting Philadelphia's first Super Bowl title.'

"It was a lot of fun. It was a lot of fun," Wentz said Wednesday. "Obviously we had a lot of success there. Winning the Super Bowl up there was pretty special. Being a part of that was pretty cool. It's quite the city, quite the fan base, quite the experience. I'll definitely cherish my time there but obviously being on the other end now, it'll look a little different. It was a fun couple years there while I was up there. I definitely cherished my time there."

The divorce from Philadelphia was a messy one, starting with Wentz's performance in the 2020 season. Of the 35 qualifying quarterbacks in major passing categories, Wentz was 34th in completion percentage (57.4), 33rd in yards per attempt (6.0), and 34th in quarterback rating (72.8). He tied for the NFL lead in interceptions thrown (15) and was sacked the most of any quarterback in the league (50) -- despite playing in just 13 games. Wentz's bad throw percentage (what qualifies as a poor throw to a receiver) was second-highest in the league for quarterbacks that attempted over 400 passes (21.7%).

The Eagles moved from head coach Doug Pederson and committed themselves to Wentz, but he wanted to move on. Wentz was ultimately traded to Indianapolis as the Eagles received a 2022 first-round pick and 2021 third-round pick. Wentz was traded before the Eagles even used the pick, which helped them land A.J. Brown in this past year's draft.

So how did things get so south in Philadelphia?'

"I definitely cherished my time I had up there. It was definitely a wild ride in many, many ways."

Wentz is off to a strong start in Washington, completing 65.5% of his passes for 650 yards with seven touchdowns to three interceptions for a 100.3 passer rating. Not only is Wentz tied for the league lead in touchdown passes, he's the only player with 10 completions of 20-plus yards this year.'

He's comfortable with his new franchise, which is all that matters at this point. Philadelphia is in the past, even if Wentz has to face the Eagles twice a year.'

"It's been fun. It's been a lot of fun," Wentz said. It's a younger team with a lot of guys that are hungry, hungry to win. It's been fun to be a part of it, kind of having a different leadership role being one of the older guys in the locker room.'

"We're just getting started here, but hopefully we can find a level of play that's consistent as we get going here."