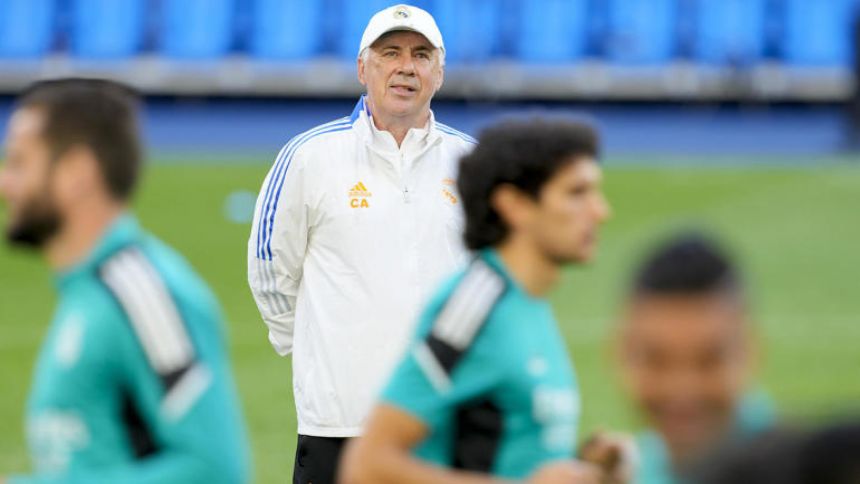 -- If the Real Madrid dressing room has something of a reputation for being a viper's den even in the best of times, then there can surely be no doubt that Carlo Ancelotti is its snake charmer.'

A squad that has turned on Jose Mourinho, that swiftly dispensed with Julen Lopetegui and seemed to conclude Rafael Benitez was not up to much within a matter of days cannot help but praise their current boss to the highest of heavens. Marcelo, in his 16th and possibly final season with Madrid, might have more cause than most to be unhappy with a manager who has turned to him ever more infrequently. It is not like Ancelotti does not have previous in that regard.

This will be Marcelo's fifth Champions League final (as many as the Italian in the Madrid dugout). In the first of those, Ancelotti opted not to pick the Brazilian with Fabio Coentrao starting instead. This season, the 34-year-old has made just five La Liga starts, none in the Champions League. His presence in the prematch press conference did not exactly seem like a suggestion that that might change on Saturday night, but was instead designed to give him what might be one last moment in front of the cameras.

He used that to lavish the warmest of praise on a manager who keeps not picking him. "I have known the boss for I don't know how many years now," Marcelo said, "eight years. I've been lucky enough to be coached by him.'

"He understands the game very well, he knows how to manage the dressing room. It's normal that we all want to play. This season, from my point of view, we have hardly had any problems in that regard. That's down to the coach. He keeps us calm, he tells the truth. We all want to be important and we are all important."

Craving even more coverage of the Champions League final? Listen to our bumper preview episode below and follow'ˇQue Golazo! A Daily AP Soccer Podcast'where we take you beyond the pitch and around the globe for commentary, previews, recaps and more. '

It was a refrain echoed by Thibaut Courtois. The belief, the energy and the vibrancy that has emanated from Madrid as they have stunned first Paris Saint-Germain, then Chelsea and finally Manchester City on their remarkable path to Paris? Credit that to Ancelotti and his staff.

"The good dynamics of the team is due to the coaching staff, we train very well and we know that they make decisions," said Madrid's number one.

These two are not alone. When the time came to address his players in their training session at the Stade de France, Ancelotti's magnetism was plain to see. Karim Benzema and Vinicius Junior, the two star forwards of this team, stood rapt in their attention. You would be forgiven for thinking it was the 62-year-old from Emilia-Romagna that was the true Galactico.

The man himself, meanwhile, wears the easy expression of a man playing with house money. A year ago, Ancelotti's place among the highest echelon of club managers looked to be over. He had achieved not a lot with Everton, though the 10th position he guided them to in 2020-21 looks far more impressive given their struggles this season. If you were mapping out a career trajectory for him, it might have taken stops at international football, an ill-fated spell at a fallen giant (let's say Manchester U. No that's too obvious. M United), a paycheck or two and then the vineyard.

Now he is back in the big time, the perfect manager for a high-functioning group of veterans. They do not want much coaching. He trusts them to manage themselves. It just clicks.

"This year feels like a long time," he said of having gone from midtable in England to Europe's top table. "I'm treating it naturally, getting to this final is a big success for us. We know how demanding this club is and all about the club's history. It's been a big feat to get to this point, we think we've had a very good season and we are very close to achieving something huge this season.'

"We are very calm in the camp. I'm here to manage a game with the veteran players helping the younger ones to have a good atmosphere around the squad with lots of excitement and confidence running through the ranks."

This is the biggest game some players might play in their career, but for Ancelotti this is just another occasion, one in which he can joke that he is actually really rather sad and name as his favorite of five Champions League finals the one he lost, against this very opponent on Saturday (Liverpool came back from three goals down at half time to beat AC Milan on penalties in 2005). The 62-year-old is utterly at ease --'"It's my 15th final, and I know not to think too much about what could happen" -- because he knows that projecting that to his players will only help to put them in the same.'

"I've really enjoyed it this year, I've enjoyed my time at this club with these players," Ancelotti said. "I'm still enjoying it, I'm very happy and calm today, full of confidence. I might get a bit worried tomorrow afternoon but you fight against those worries through the players because they are filling me with confidence."