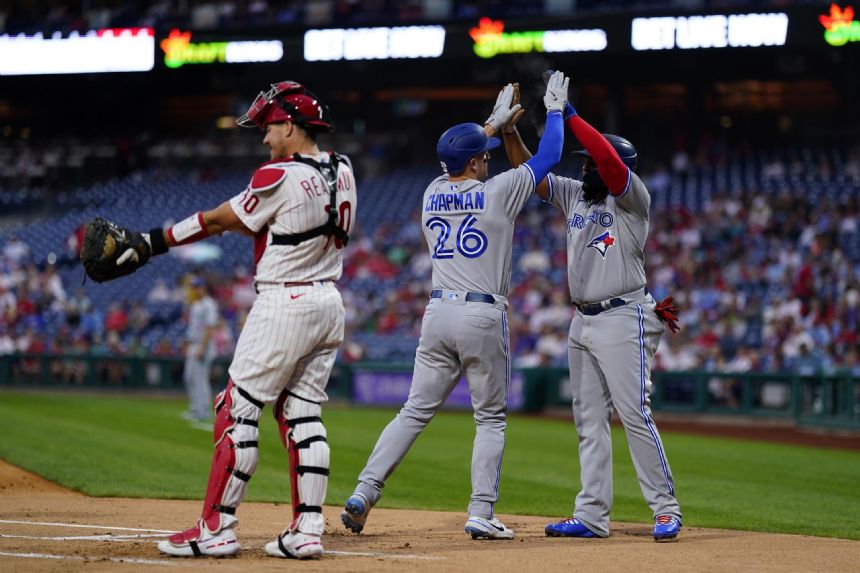 PHILADELPHIA (AP) - Matt Chapman hit a three-run homer in the first inning, Jackie Bradley Jr. added a three-run shot in the ninth and the Toronto Blue Jays used 21 hits to rough up the Philadelphia Phillies 18-11 on Tuesday night in a matchup of teams fighting for wild-card berths.

The Blue Jays are in better shape, not only as winners of five of seven games, but with a firm grip on the top wild-card spot in the American League. The Phillies, who suffered a three-game weekend sweep at Atlanta, lost their fifth straight game.

Philadelphia entered with only a 2.5-game lead (plus the tiebreaker) over the Milwaukee Brewers for the final National League wild-card spot.

Kyle Schwarber hit his NL-best 40th homer of the season for the Phillies in the eighth, a three-run shot that made it 14-10. He became the first Phillies slugger to hit 40 since Ryan Howard did it from 2006-2009.

J.T. Realmuto hit his 20th homer and went 5 for 5 for the Phillies, driving in two runs and scoring twice.

Raimel Tapia and Danney Jansen each had three RBIs for the Blue Jays. Toronto had 10 extra-base hits and scored in every inning but the fourth. Jansen, though, struck out against backup catcher-turned-reliever Garrett Stubbs in the ninth to chants of "Stubbs! Stubbs! Stubbs!"

The Phillies have 15 games left, including five more on this final homestand of the season. Toronto has 14 more to go and just opened a six-game road trip.

"We just have to get back to winning and if we keep playing the way we're playing, we're going to do that," Phillies interim manager Rob Thomson said before the game.

But certainly not the way they played against the Blue Jays, the crucial mistakes in the middle innings, first when Bryce Harper was doubled up to end a rally in the fifth and then shortstop Bryson Stott's two-base error in the sixth that led to an unearned run.

Trailing 7-1 in the fifth, the Phillies broke though against Toronto starter Ross Stripling. Dalton Guthrie made it 7-2 on a solo shot for his first big league homer. Rhys Hoskins had a run-scoring double and Harper and Realmuto added consecutive RBI singles that made it 7-5.

Blue Jays reliever Zach Pop (3-0) helped them escape the inning when he retired Stott on a flyout to center and George Springer caught Harper at second to end the threat.

Stripling gave up nine hits and five runs in of four-plus innings, ending a streak of 16 straight starts of allowing three or less earned runs, one shy of tying the franchise mark.

Kyle Gibson (10-7) couldn't get it done and was left in to get battered around for seven runs and 12 hits over five innings. His trouble started early when Chapman's 27th homer on a drive into the left field seats made it 3-0 in the first inning. The Blue Jays scored two in the second and tacked on single runs in the third and sixth to get the run-scoring rolling.

Phillies CF Brandon Marsh left after the third inning with left knee discomfort after running into a wall trying to make a catch. Phillies OF Nick Castellanos could begin a rehab assignment this week as part of his return from a strained oblique. Castellanos has only 13 home runs and 61 RBIs in the first season of a $100 million, five-year contract.