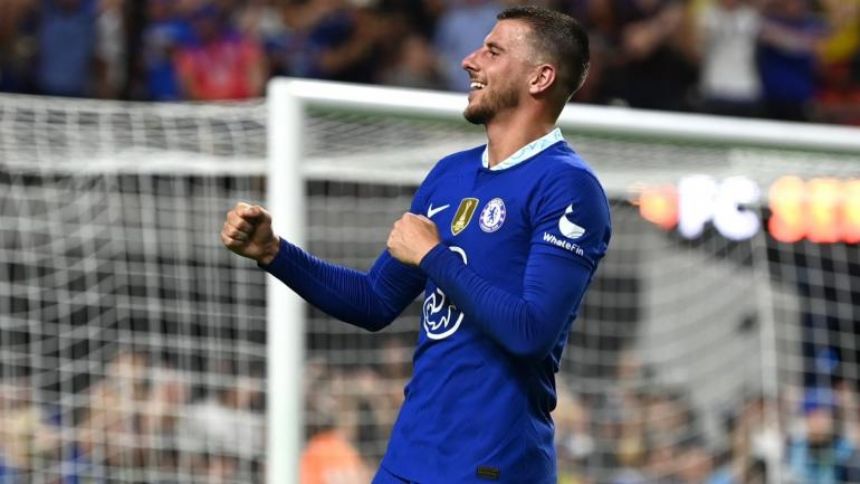 will be glad to put its focus on the field when it visits Goodison Park to kick off the 2022-23 English Premier League season against on Saturday. The Blues finished third in the Premier League last season, but the controversy surrounding Russian owner Roman Abramovich took its toll. A subsequent sale, a shakeup in upper management and a listless preseason have questions hovering over the Blues. Chelsea will be out to make a statement Saturday, while Everton is glad to be in the top flight after coming dangerously close to being relegated last year. Former Chelsea star took over as Everton manager in January and steered the team to a 16th-place finish, including a critical 3-2 win against in its penultimate game. The Toffees remain one of six English clubs that have never been relegated, along with Chelsea, , , and Tottenham. ' ' ' '

Kickoff is set for 12:30 p.m ET. Caesars Sportsbook lists Chelsea as the -160 favorite (risk $160 to win $100) on the 90-minute money line in its latest Everton vs. Chelsea odds. Everton is the +475 underdog, a regulation draw is priced at +280, and the over-under for total goals scored is 2.5. Before locking in any your Chelsea vs. Everton picks, be sure you check out the English Premier League predictions from proven soccer insider Martin Green.'

Now, Green has broken down Everton vs. Chelsea from every angle and just locked in his picks and Premier League predictions. You can head to SportsLine now to see Green's picks. Here are the betting lines and trends for Chelsea vs. Everton:

Why you should back Chelsea

The Blues still have quality that only a few teams can match, and the team added Raheem Sterling to contribute to the attack. Sterling scored 13 goals for last season and will join a Blues team that scored 76 goals last season, third-most in the league. led the team with 11 and also had a team-high 10 assists. (eight goals) and (four) also can cause a lot of problems with their quickness.

Chelsea lost defenders Antonio Rudiger and , but will play a big role in the back. also remains one of the best goalkeepers in the world, so the third-best defense in the EPL (33 goals conceded last season) should be able to stop Everton. The Toffees scored 43 goals and allowed 66 in 2021-22. Chelsea had 81 percent possession in the first meeting last season (1-1 draw) and 79 percent in the second (1-0 loss).

Why you should back Everton'

The Toffees are 3-3-2 in their last eight meetings with Chelsea, managing to score twice over the past two games despite having less than a quarter of the possession. Chelsea's defense looked vulnerable at times in the preseason, especially in a 4-0 loss to Arsenal. (five goals, four assists last season), and (four, two) could find room to operate. Dwight McNeil was one of two key signings from , and he had seven goals and 17 assists in four seasons there.

The other signing should have an even bigger impact, with adding a commanding presence on defense. He was second in the league in blocked shots with 92 for the Clarets last season. Tarkowski should help a team that allowed 35.3 percent of opponents' shots to find the target (fourth-worst in EPL). That should benefit goalkeeper , who had a 65.9 save percentage, more than five percent worse than his 2021-22 mark. He was sixth in the EPL with 114 saves. '

How to make Everton vs. Chelsea picks

Green has scrutinized Chelsea vs. Everton from every angle, and he is leaning under on the goal total. He also provides three confident best bets, including one that would return plus money, and has a full breakdown of the match. He's only sharing his Premier League picks here.

So, who wins Chelsea vs. Everton on Saturday? And where does all the betting value lie? Visit SportsLine now to see the best bets for Everton vs. Chelsea, all from the European soccer expert who has generated almost $35,000 for $100 bettors over the past four seasons, and find out.