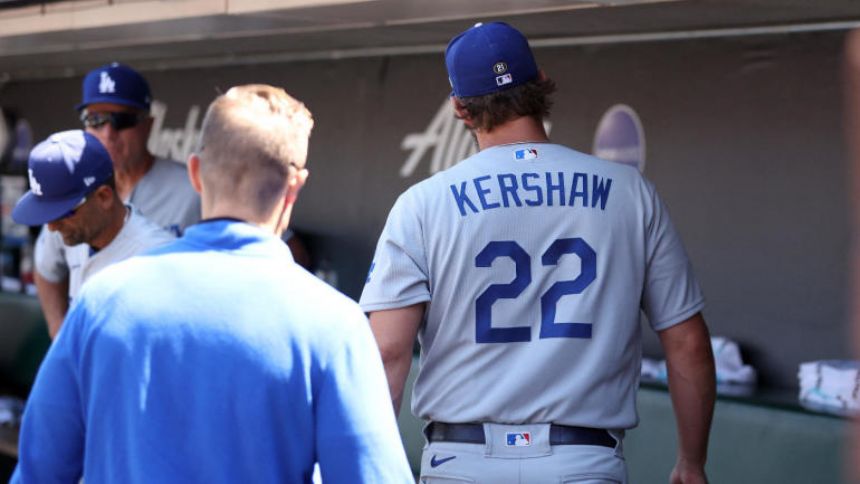 The NBC Sports Bay Area broadcast appeared to catch Kershaw telling the trainer, "it's my back," though the team has yet to make any announcements regarding the injury. Here's the video:

Clayton Kershaw left the game in the bottom of the fifth inning with an apparent injury pic.twitter.com/bHUSOxHX58

Kershaw, 34, has a history of back trouble. He missed 41 days with back inflammation in 2014, 74 days with a disc herniation in 2016 and 39 days with a back strain in 2017. Kershaw also spent short stints on the injured list with back issues in 2018 and 2020. Last season, a flexor injury cost him much of the second half and postseason, and he missed time with a hip injury earlier this year.

The Dodgers did not add a starting pitcher at the trade deadline, and in fact they traded away a rotation depth piece in Mitch'White. He started 10 games earlier this season and four last season, and was dealt to the Toronto Blue Jays. The club's rotation depth chart currently looks something like this:

Losing Kershaw for any length of time would be a significant blow, though Los Angeles came into Thursday with a comfortable 11 1/2-game lead in the NL West, so they have given themselves a cushion. Regardless of the nature of the injury, expect the Dodgers to be conservative with Kershaw's recovery and rehab work to avoid a setback.

Nothing is clinched yet, but the big division lead gives the Dodgers breathing room. Their priority is ensuring the rotation is in top shape heading into October, not chasing every win in August and September. They'll do what they have to do to get through games the next two months without overworking their projected postseason starters, even if Kershaw is sidelined.

Going into Thursday, Kershaw owned a 2.66 ERA with 84 strikeouts in 14 starts and 81 1/3 innings this year. He was an All-Star for the ninth time. Kershaw signed a one-year, $17 million contract this past offseason and seems to be going year-to-year at this point in his career.