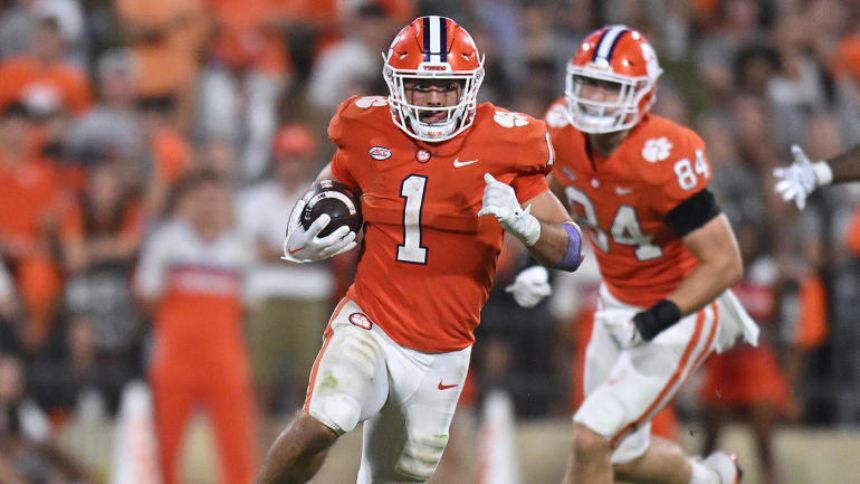 One of three matchups between teams ranked in the AP Top 25 poll will kick off Saturday's Week 4 action when No. 5 Clemson travels to No. 21 Wake Forest in a head-to-head battle that will decide the early leader in the race for the ACC Atlantic title.'

Wake Forest snapped Clemson's six-year run of winning the ACC Atlantic in 2021, though the Demon Deacons' trip to the ACC Championship Game did not come as a result of a head-to-head win against the Tigers. Clemson has actually won 13 straight in the series, and every game since 2012 has been decided by double digits. But with Clemson taking a couple conference losses early last season, Wake Forest surged ahead in the standings and claimed the division title with a 7-1 conference record.'

Now, we have both Wake Forest looking to snap its own losing streak to Clemson, while also positioning itself to win the ACC Atlantic again if it pulls off the top-five upset at home on Saturday. Meanwhile, coach Dabo Swinney and the Tigers have their sights set on reclaiming the ACC Atlantic crown here in the final year of division play in the ACC. '

The Claw-fense has hit its stride:'Prior to his move to being a head coach at both the FCS and FBS level, Dave Clawson rose through the coaching ranks as an offensive coordinator. His passion for the Demon Deacons' offensive schemes are evident any time he's asked about the subject. He and offensive coordinator Warren Ruggiero, who made the move from Bowling Green to Wake Forest with Clawson, have established an identity based on tempo, options and explosive plays. It took a few years for the program to build up its depth and experience, but for the last five years this has been one of the most consistently productive offenses in the ACC. In fact, Wake Forest is the only program in the ACC to average at least 30 points per game in each of the last five seasons.'

Will Shipley delivering on hype:'Clemson running back Will Shipley flashed as a freshman in 2021, but his campaign was interrupted by injury. Now fully healthy, there was plenty of buzz about what was in store for his second season in the Clemson backfield. So far, he has lived up to those expectations. Shipley has scored two touchdowns in each of the Tigers' three wins this season, standing out as one of just three players nationally to have multiple touchdowns in their first three games of the season. He's also accomplishing this feat while sharing the running back reps with junior Kobe Pace and sophomore Phil Mafah. Shipley has carried a majority of the workload so far, but Clemson's commitment to keeping the running back room fresh does mean this production is coming in comparatively limited action.'

Longest active winning streak on the line:'With Louisiana's loss to Rice in Week 3, Clemson now has the nation's longest winning streak with nine straight wins dating back to the middle of last season. The Tigers' ability to overcome dozens of key injuries and three early-season losses in 2021 allowed the program to roll off six straight wins and keep its program streak of 10-win seasons alive, but it also laid the foundation for a pivotal 2022 season. Despite last year's struggle the expectations for Clemson, this season have been a return to the title-contending standard. Keeping this winning streak alive would go hand in hand with meeting that standard with a zero in the loss column deep into the season. '

How to watch Clemson vs. Wake Forest live

Wake Forest has found outright success or at least more competitive results against every other ACC team except for the Tigers, and the reason comes down to a major disadvantage at the line of scrimmage. Throughout the College Football Playoff era we have been dazzled by some of the quarterbacks and wide receivers to come through Clemson, but the most consistent unit year-to-year has been the defensive line. That defensive front has overwhelmed Wake Forest over the years, disrupting all the intricate and well-crafted aspects of the offense. I think that trend continues, as does the trend of double-digit wins. 'Prediction: Clemson -7