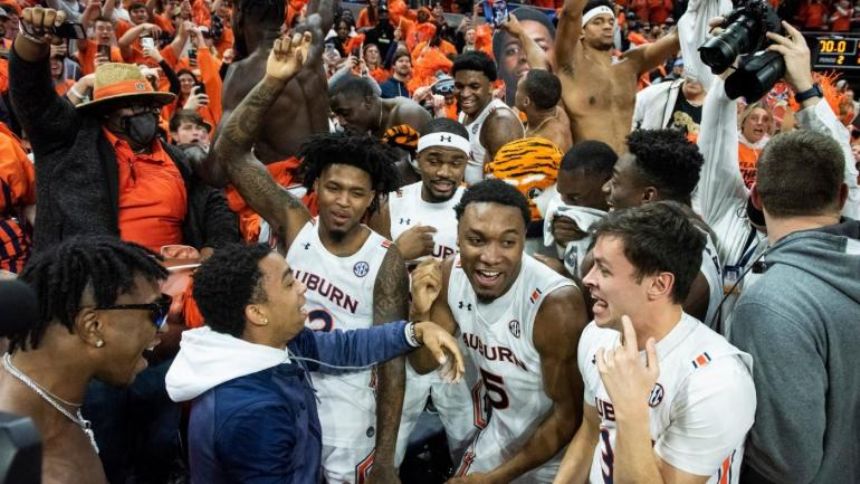 At long last, Auburn's men's basketball team reached No. 1 in the AP Top 25 on Monday for the first time in program history following an 80-71 win over Kentucky on Saturday. That victory was apparently enough to give the Tigers (18-1, 7-0 SEC) an edge on Gonzaga, which fell from No. 1 to No. 2 this week despite a 78-62 victory against a strong San Francisco team. The Bulldogs (15-2, 4-0 WCC) enjoyed a narrow 1,486-1,482 points edge in the poll last week, even though Auburn actually received more first-place votes (36) than Gonzaga (25). But this time, the Auburn had a 29-point edge and an even larger share of the first-place votes with 45 to Gonzaga's 15 and Arizona's 1.

Auburn is this season's fifth No. 1 team, joining Gonzaga, Duke, Purdue and Baylor among the group of teams to hold the distinction. The Tigers had been No. 2 on multiple occasions, including this past week. But with a deep roster headlined by potential No. 1 overall pick Jabari Smith and North Carolina transfer center Walker Kessler, the Tigers have one of the nation's best front courts in the nation and the best defensive squad of Pearl's eight-year tenure.

Behind that strong roster, Auburn is on a 15-game winning streak as it prepares to play at Missouri on Tuesday before hosting Oklahoma on Saturday as part of the Big 12/SEC Challenge.

Itching for more college hoops analysis? Listen below andsubscribe to the Eye on College Basketball podcastwhere we take you beyond the hardwood with insider information and instant reactions.