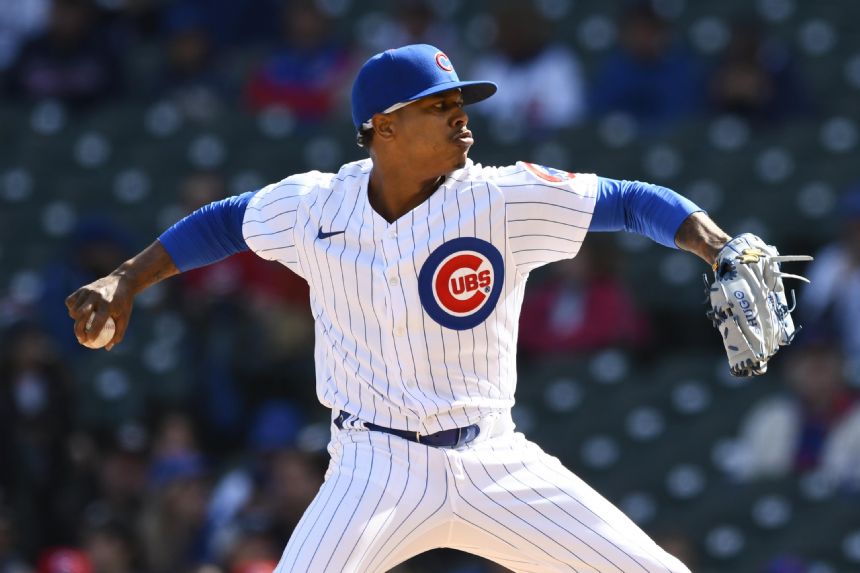 CHICAGO (AP) - Willson Contreras got several standing ovations in what could be his final home game at Wrigley Field, Marcus Stroman threw six scoreless innings and the surging Chicago Cubs won their seventh straight, beating the Cincinnati Reds 8-1 on Sunday.

Nelson Velazquez drove in four runs, helping Chicago match its best run since a seven-game streak late last year. The Cubs, aided by three walks and a hit batter, knocked out a Chase Anderson in a five-run first and cruised to their 11th win in 12 games in their Wrigley Field season finale.

The Reds have dropped six straight and 19 of 23. They'll need to sweep a three-game series against the Cubs in Cincinnati to avoid the franchise's second 100-loss season.

Contreras was cheered loudly when he came to the plate in the first, then was hit by a pitch and scored. He got another big ovation when he batted in the eighth and was showered with more cheers from the crowd of 30,029 when he trotted toward the dugout after being lifted for a pinch runner following a walk. The three-time All-Star who helped Chicago win a drought-busting World Series championship in 2016 has an expiring contract.

Stroman (6-7) gave up five hits, struck out seven and walked two. The right-hander was 3-0 in his final four starts.

Velazquez capped a five-run first with a two-run double against Fernando Cruz and drove in two more with a triple off the right-field wall in the seventh. Seiya Suzuki had two hits and two RBIs.

Anderson (2-4) lasted just seven batters and got one out. The right-hander was tagged for five runs, walked three and gave up two hits. His ERA jumped from 4.70 to 6.56 in seven starts and eight appearances.

Jonathan India singled in a run in the seventh.

RHP Hayden Wesneski (3-1, 2.33 ERA) opposes Hunter Greene (4-13, 4.66) as the Cubs and Reds open a season-ending, three-game Aug. 31-Sept. 6, 2021series in Cincinnati. Wesneski will make his fourth start and sixth appearance since having his contract selected from Triple-A Iowa. Greene has a 1.06 ERA in his past three starts.