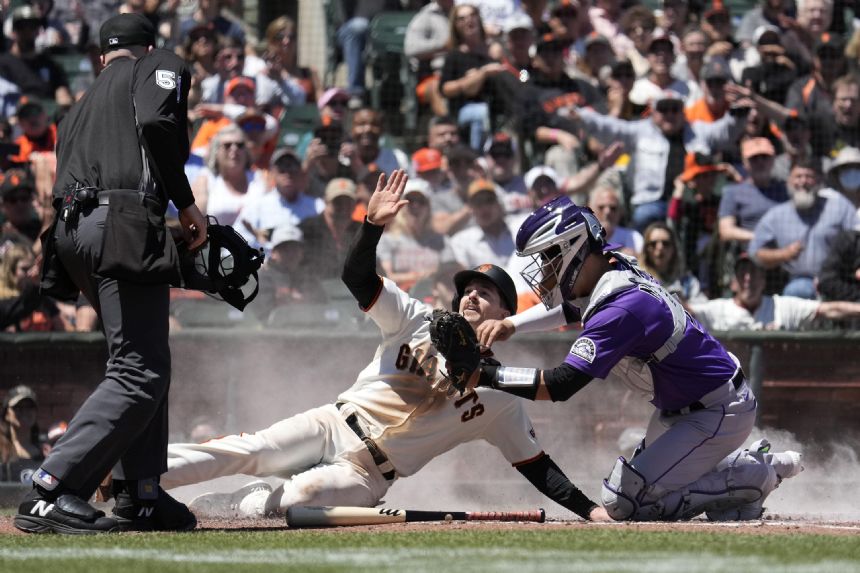 Colorado lost its fourth in a row.

Cobb (2-1) limited Colorado to one run on three hits in 5 1/3 innings and struck out six. He won for the first time since his Giants debut on April 12.

San Francisco handed Rockies starter Chad Kuhl (3-1) his first loss of the season, tagging him for five runs in 4 2/3 innings. It was just the second time in six starts that Kuhl allowed more than one run.

Crawford opened the scoring in the fourth with an RBI grounder. Bart singled home a run and Belt had a sacrifice fly to make it 3-0.

The Giants boosted their lead in the fifth on Crawford's third homer of the season, a two-run drive.

Charlie Blackmon provided the Rockies' lone run in the the sixth on an RBI grounder.

Wade singled home another run for San Francisco in the eighth, finishing 3 for 4 with a walk. Pederson drew a bases-loaded walk.

The Giants have outscored the Rockies 78-28 during the 10-game winning streak, recording at least 10 hits in each game.

Pederson snapped an 0-for-22 drought with an infield single in the seventh inning, his first hit in the month of May. Pederson hit .353 in April with six homers and 10 RBIs.

Giants: LHP Jake McGee (lower back tightness) was placed on the 15-day injured list. ... Wilmer Flores missed his second straight game after being scratched Tuesday with lower back tightness. ... 3B Evan Longoria (finger surgery) returned from the 10-day IL and made his season debut, going 0 for 5 with three strikeouts.

The Giants acquired INF Donovan Walton from the Seattle Mariners for RHP Prelander Berroa and assigned him to Triple-A Sacramento. INF Mike Ford was designated for assignment.

Giants: RHP Logan Webb (4-1, 3.82) opens a three-game series in St. Louis on Friday. Webb has won his last three starts, including a 13-7 victory over the Cardinals on Saturday.