Cueto, Lopez combine for 3-hitter as Chisox down Astros 7-0 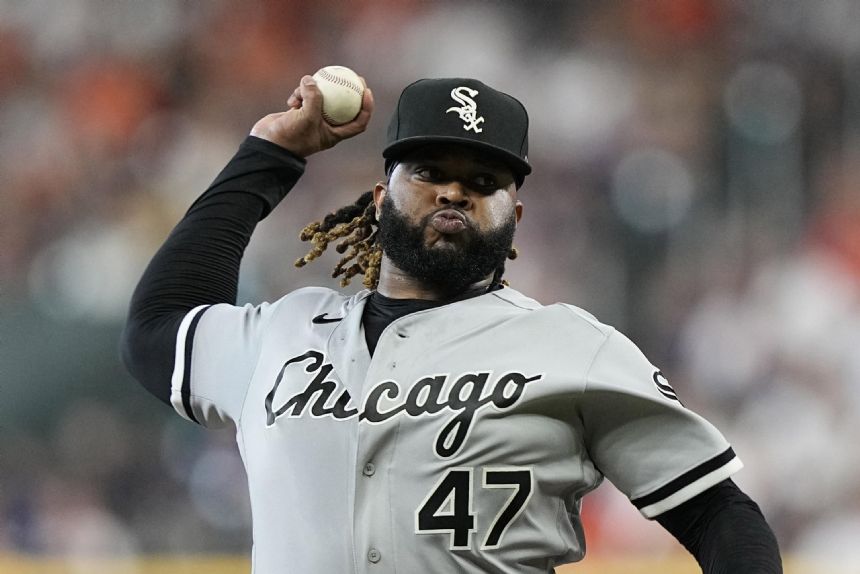 HOUSTON (AP) - Johnny Cueto and Reynaldo Lopez combined for a three-hitter and Luis Robert tied a career-high with four RBIs as the Chicago White Sox jumped on Justin Verlander early and cruised to a 7-0 win over the Houston Astros on Saturday.

Cueto (1-3) allowed two hits and struck out five in a season-high seven innings to get his first win since July 29 with San Francisco.

Robert tied a season-best with three hits and Jose Abreu drove in two runs as the White Sox built a 7-0 lead after four innings to get their fourth win in five games.

Cueto allowed a leadoff single to Jose Altuve and walked a batter in the fourth and sixth innings.

But Houston didn't get another hit until Alex Bregman singled with no outs in the seventh. He was erased when Yordan Alvarez grounded into a double play before Cueto retired Kyle Tucker to end his day.

Lopez yielded one hit in two scoreless innings to complete the shutout.

Verlander (8-3) entered the day tied for the MLB lead with eight wins, but had a rare sub-par start in what has been a splendid season in his return after missing almost two years after Tommy John surgery.

He allowed nine hits and seven runs - four earned - in a season-low 3 2/3 innings to snap a two-game winning streak.

Houston's tough day at the plate came a day after the team scored 10 runs in the sixth inning to tie a season high with 13 runs in a win in the series opener.

Seby Zavala singled to open Chicago's third and Danny Mendick singled with one out. The White Sox loaded the bases on a single by Andrew Vaughn before Robert's single on a liner to right field scored two to make it 2-0.

Abreu then hit a double to left field to send two more home and extend the lead to 4-0.

A single by Josh Harrison got things going for Chicago in the fourth and Adam Engel singled with one out. Altuve then let Vaughn's grounder to second roll through his legs, and Robert hit a two-run double that chased Verlander. He was replaced by Phil Maton and he retired Abreu to end the inning.

White Sox: 3B Yoan Moncada was out of the lineup after leaving in the third inning Friday night with tightness in his left hamstring. Manager Tony La Russa said Moncada was having an MRI Saturday.

Astros: SS Aledmys Diaz left the game after five innings with discomfort in his left shoulder. ... RHP Jake Odorizzi, who has been out since May 16 with a left leg injury, threw 35 pitches off the mound before the game. Odorizzi said he felt good and could begin a rehabilitation assignment soon.

Verlander had three strikeouts to give him 3,094 in his career, moving him past CC Sabathia (3,093) for 16th on the all-time list.