D'Arnaud, Swanson homer as Braves close in on postseason 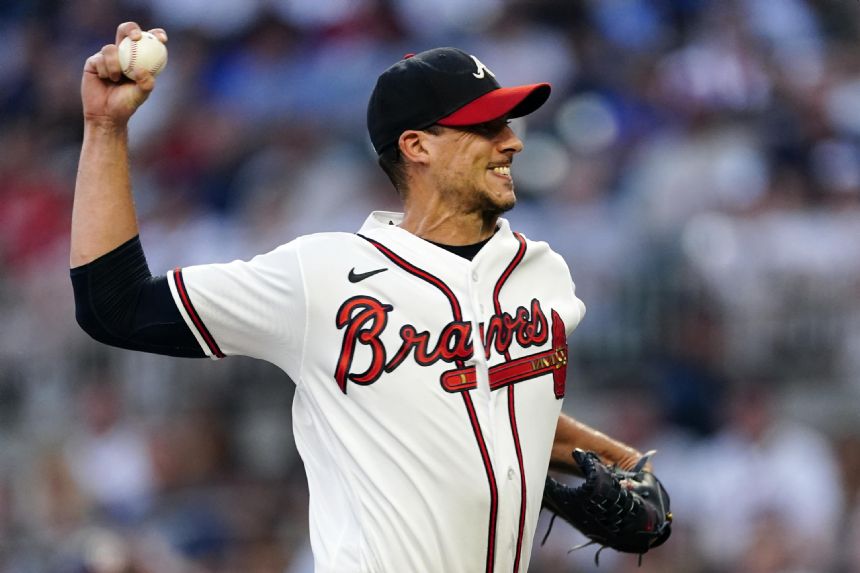 ATLANTA (AP) - Travis d'Arnaud broke a scoreless tie with a two-run homer in the fourth inning, Dansby Swanson went deep in the eighth, and the Atlanta Braves moved closer to the postseason with a 3-2 victory over the Washington Nationals on Tuesday night.

The defending World Series champion Braves need any combination of another win or a loss by Milwaukee to claim a fifth straight postseason berth. The Brewers were playing the New York Mets. Atlanta (93-55) is also vying for its fifth consecutive division title but began the day in second place and one game behind the Mets in the NL East.

Swanson added his 21st homer, an opposite-field solo shot to right off Kyle Finnegan that sailed 379 feet and padded the lead to 3-1. The Braves have won 10 straight games at home, outscoring opponents 47-15 over this stretch. Atlanta is 52-25 at Truist Park and has the NL's second-best winning percentage in home games.

Charlie Morton (8-6) allowed one run and three hits with three walks and nine strikeouts in 5 1/3 innings. He didn't give up a hit until Victor Robles singled with one out in the third. Robles advanced on a throwing error by Morton on a pickoff move, but Morton struck out the next two batters to end the threat.

Morton avoided trouble in the 31-pitch fourth. He issued a pair of two-out walks, and the runners advanced on a wild pitch before Morton hit CJ Abrams with a pitch to load the bases. The 38-year-old right-hander struck out Ildemaro Vargas to escape the jam.

The last-place Nationals trimmed the lead to 2-1 in the sixth. Joey Meneses doubled and advanced to third on Luke Voit's single that chased Morton. Collin McHugh had a chance to get out of the jam, but second baseman Vaughn Grissom made a throwing error on a potential double play grounder that scored Meneses and put runners at second and third.

McHugh retired the next two batters to avoid further damage.

Kenley Jansen faced seven batters in the ninth for his NL-leading 36th save in 43 chances. The first two batters reached without the ball leaving the infield before Jansen struck out the next two batters. Luis Garcia delivered a run-scoring single to make it 3-2, Meneses was intentionally walked, and Luke Voit flew out to end it with the bases loaded.

Atlanta is 26-8 against Washington over the last two years. The Braves have gone deep 35 times against the Nationals this season and lead the NL with 224 homers.

Washington starter Patrick Corbin left the game with two outs in the first with an undisclosed injury. He had a 1-1 count on Matt Olson when Corbin stepped back off the mound and bent over and time was called. Manager Dave Martinez and a trainer came out to see about Corbin, who soon walked off the field under his own power.

Ramirez took over and retired five in a row before Grissom reached on an infield single in the third. Corbin had lost nine consecutive starts against Atlanta and had a 7.28 ERA over that stretch.

Nationals: Martinez said DH Nelson Cruz (eye inflammation) is still not ready to face big league pitching and will stay out of the lineup until he's ready. ... LHP MacKenzie Gore (left shoulder inflammation) reported no problems after his bullpen session and will make a rehab start with Triple-A Rochester on Friday.

Braves: RHP Spencer Strider has a sore left oblique and will not make his next start Saturday in Philadelphia. Manager Brian Snitker said Strider will not go on the injured list and will play catch until he's ready to return to the rotation.

Atlanta SS Dansby Swanson made a sliding, backhanded stop of Meneses' hard grounder in the fourth and threw the runner out easily from the outfield grass. ... Robles ran hard to his left in center field and made a diving catch of d'Arnaud's liner to end the sixth.

Braves rookie RHP Bryce Elder (1-3, 3.67 ERA) will make his seventh start as the teams conclude a three-game series with a 12:20 p.m. start. The Nationals have yet to announce a starter. Martinez