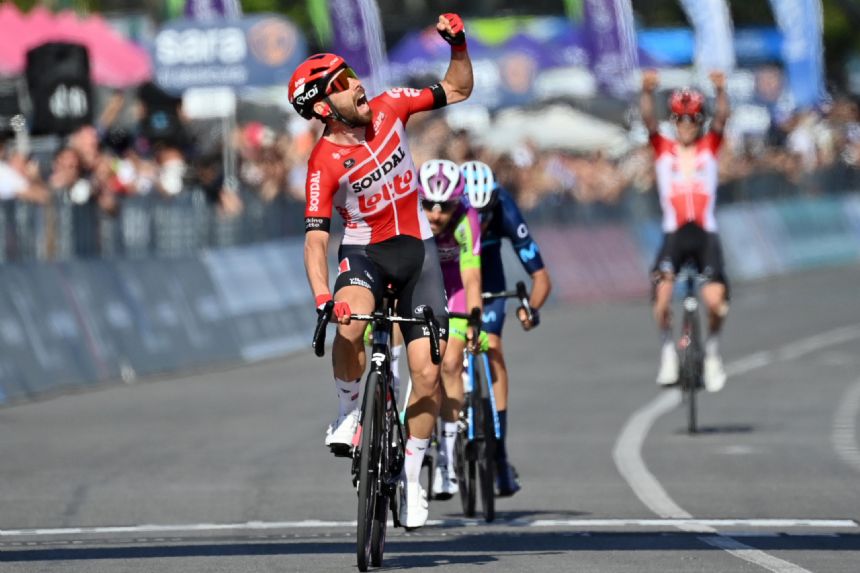 De Gendt was helped by Lotto-Soudal teammate Harm Vanhoucke and edged out Davide Gabburo and Jorge Arcas in the sprint at the end of an undulating 153-kilometer (95-mile) route that started and finished in the seaside city of Naples.

The 35-year-old De Gendt sat up and pumped his fist in celebration as he crossed the line.

All four riders were part of a 21-man breakaway that got away in a fast start, driven by Mathieu Van Der Poel, who was keen for the stage win.

The route took in four laps of a 19-kilometer (12-mile) circuit in the volcanic surrounding area.

It was on the penultimate lap that Van Der Poel tried to attack, but he was caught by other riders from the breakaway. Shortly after, the quartet that contested the final sprint managed to get clear, with 40 kilometers remaining.

Most of the overall contenders crossed the line together, about 3 1/2 minutes behind De Gendt.

Lopez maintained his 38-second advantage over Lennard Kämna after moving into the overall lead on Tuesday. Rein Taaramäe was third, 58 seconds behind Lopez.

Sunday's ninth stage is one of the toughest in this year's race. The 191-kilometer (119-mile) route from Isernia finishes atop the fearsome Blockhaus, with double-digit gradients along a series of hairpin bends leading to the line.

There are also three other categorised climbs on a day that includes 5,000 meters (16,400 feet) of climbing.

The Giro finishes on May 29 in Verona.