DeBoer has old, young Stars who would like another Cup debut 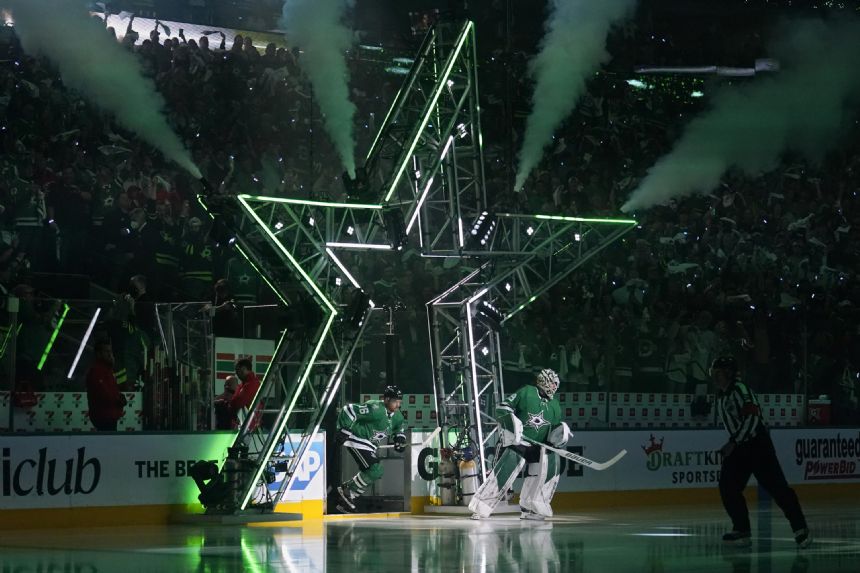 DALLAS (AP) - Dallas Stars coach Pete DeBoer sees similarities between his new team and the two that he led to the Stanley Cup Final in the first seasons with them.

"Everybody said the door was closing on their window to win, and that the core was aging," said DeBoer, adding bluntly that the New Jersey Devils and San Jose Sharks didn't really care what others thought when he arrived. "And the other similarities are you also need help for that group."

The top scorer for Dallas last season was 38-year-old center Joe Pavelski, whose four seasons as captain in San Jose were DeBoer's only full seasons there. Jamie Benn, the Stars captain the past nine seasons, had 18 goals and his 0.56 points-per-game average was his lowest since his 2009-10 rookie season. Six-time All-Star forward Tyler Seguin just turned 30 after a string of injuries in recent years.

Around those veterans are players like 25-year-old forwards Roope Hintz and Denis Gurianov, and even younger 40-goal scorer Jason Robertson, whenever the restricted free agent's contract situation gets resolved. There are young defensemen like Miro Heiskanen and newcomer Miles Lundkvist, and 23-year-old goaltender Jake Oettinger got a $12 million, three-year contract after his breakthrough season.

The Stars made the playoffs three of the past four seasons, including the Stanley Cup Final two years ago in the pandemic-altered 2019-20 season finished in a Canadian bubble. After missing the postseason in the abbreviated 56-game season that followed, they got to a Game 7 overtime loss in the first round when Oettinger had 64 saves in the final game against Calgary last spring.

"I know I can play at a really high level, and be one of the best goalies in this league," Oettinger said. "I think I showed that in the playoffs, and now it's up to me to make sure that it's a consistent level of play like that, and not just kind of a flash in the pan type of thing."

DeBoer replaced Rick Bowness, whose contract was up at the end of his 2 1/2 seasons that began with Dallas going to the Stanley Cup Final with him as interim head coach. The 67-year-old Bowness is now the coach again in Winnipeg, where he coached the final 28 games of the 1988-89 season.

Pavelski is coming off a career-high 81 points (27 goals, 54 assists), one short of his first point-a-game season.

"He looks like the same old Joe. ... Really looks ageless," DeBoer said. "Just having him in the room, he knows what we're about. He knows how we want to play. He's heard us message before. It's instant credibility with our group from one of the most respected guys in the room."

Robertson last season skated on a line with Pavelski and Hintz that combined for 232 points.

Only 23 and still five years from being an unrestricted free agent, Robertson has 125 points (58 goals, 67 assists) in 128 NHL games since being a second-round draft pick in 2017. His 41 goals last season made him only the fourth 40-goal scorer during the team's three decades in Dallas.

"I'm very leery giving away first-round picks for rentals. This is a young player who's one of the top prospects," Nill said. "Any time I can do that, I'll do it because I know what I'm getting, and the development part of the equation has already happened."

Dallas got Lundkvist from the Rangers before camp for conditional first- and fourth-round picks. He was New York's first-round pick in 2018, and had 78 points (30 goals) in 166 games in the Swedish Hockey League before his NHL debut in 25 games last season.

The Stars open the season with back-to-back games against Nashville -- on the road Oct. 13, then their home opener two nights later - before an early visit from Bowness and the Jets in the second home game Oct. 17. The Jets are there again Nov. 25 during an 11-game stretch when Dallas has nine home games. The Stars also have an eight-game homestand early in the second half of the season.