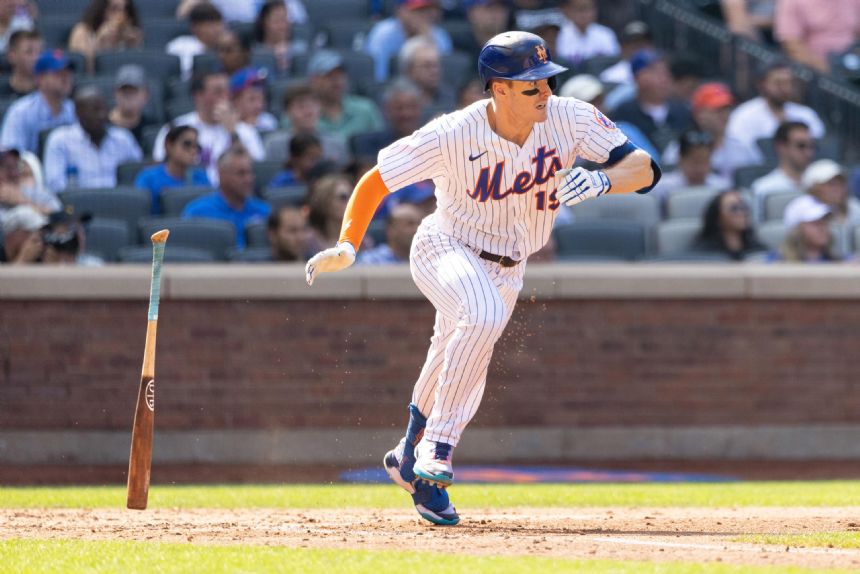 NEW YORK (AP) - Jacob deGrom struck out 13 batters - the most ever for a Mets pitcher who threw five or fewer innings - but didn't factor into the decision Sunday, when the NL East leaders beat the Pittsburgh Pirates 7-3 to complete a four-game sweep.

The Mets scored four in the eighth to break the tie.

The Mets stranded 12 runners in the first seven innings. But Jeff McNeil had an RBI single in the first and drew a bases-loaded walk in the second, when Pete Alonso hit into a run-scoring forceout.

Mets pitchers combined to strike out 20 batters, tying the big league record for a nine-inning game.

DeGrom allowed a leadoff double to Oneil Cruz in the first before retiring the next 15 batters, 13 by strikeout. Sid Fernandez (June 30, 1986) and Oliver Perez (Sept. 12, 2006) each struck out 11 batters in five-inning starts for the Mets.

DeGrom threw 26 pitches in the first - his most since a 29-pitch fifth inning against the Arizona Diamondbacks on May 9, 2021 - but needed just 61 pitches between the second and fifth.

Zack Collins, making his third appearance with the Pirates since being acquired from the Toronto Blue Jays, led off the sixth with his first hit for Pittsburgh and Delay followed with a single before Cruz homered just beyond the right-centerfield fence to chase deGrom.

The benches and bullpens cleared but no punches were thrown after Pete Alonso was hit on the left elbow by an Oviedo pitch in the first inning.

It marked the fifth time a Pirates pitcher plunked a Mets batter since Saturday. Oviedo and Alonso exchanged words and gestures and Jeff McNeil helped steer Alonso towards first base while players milled about. After a couple minutes, the teams began heading to their benches and bullpens while "Why Can't We Be Friends?" played at Citi Field.

The plunking of Alonso marked 102nd time this season the Mets have been hit by a pitch, three shy of tying the major league record set by the Cincinnati Reds in 2021.

Words also appeared to be traded between Mets second baseman Luis Guillorme and Pirates designated hitter Bryan Reynolds after Reynolds - who reached base when he was hit by Seth Lugo - slid beyond the bag on an inning-ending forceout in the sixth. Several Mets and Ke'Bryan Hayes, who hit the grounder,- remained on the right side of the infield as Reynolds and Guillorme conversed from a distance.

The Mets held a moment of silence prior to first pitch in memory of Joan Hodges, the widow of Hall of Famer and 1969 "Miracle Mets" manager Gil Hodges.

Joan Hodges died Saturday night at 95 years old, a little less than two months after Gil was officially enshrined in the Hall of Fame. She is survived by the couple's three children.

Mets: RHP Max Scherzer (left oblique) will be activated to start Monday night, when New York starts a road trip with the opener of a three-game series against the Milwaukee Brewers. ... Manager Buck Showalter said RHP Drew Smith (right lat) could be activated as soon as Tuesday. Smith hasn't pitched since July 24.

Pirates: Have not yet announced a starter for Tuesday, when Pittsburgh continues its Big Apple swing with the opener of a two-game series against the Yankees.